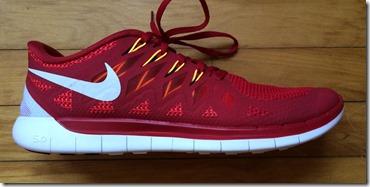 When you’re in the business of writing about running shoes, it pays to be quick about sharing thoughts on new shoe releases, particularly when the release involves one of the top-selling shoes in the country (world?). This week Nike launched the 2014 Free line, and my plan was to pick up a pair right away and fast-track a review (i.e., run in them pretty much exclusively for a week or two to get enough miles for a solid review).

Last night I went to the local Dick’s Sporting Goods to pick up a pair of the Nike Free 5.0 2014. I initially tried on a pair in size 10.5, which is what I wore in the previous version, and they felt a bit long. I asked to try a 10, and I immediately noticed that something was amiss. There is a welded overlay that extends continuously from the sole on each side up and across the base of the lace row (see area circled in red below). Overlays like this are great for providing support to an upper, but the problem is that they don’t stretch. There’s no give. And when they extend continuously across the entire upper of a shoe they can create a point of restriction. If your foot has a larger circumference than the tunnel created by the overlay, it will dig into your foot since it doesn’t stretch.

In the size 10’s, this overlay was so tight that it was actually digging painfully into my foot. I started having flashbacks to my experience with the forefoot band on the original New Balance MT10. It’s unfortunate because the forefoot of the new 5.0 is roomy, stretchy, and feels great, and I think the size 10 was a better fit. I wound up taking the 10.5’s home, and was planning on running in them today, but when I tried them on this morning I could still feel distinct pressure  from the band even in the larger size.

My experience tells me that when you feel something distinctly off in a shoe, it’s probably not a good match. If I ran in them I wouldn’t be able to return them, so I’ve decided they are going back to the store unused (I’ll grab a pair of the Free Flyknit 4.0’s when they come out instead). I had such a bad experience with the same sensation in the old NB MT10’s that it’s just not worth the risk (it’s strange, I almost have a phantom sensation in that area as I sit here wearing a totally different shoe – kind of like a food aversion that develops after a case of salmonella poisoning).

My guess is that people with narrow feet, or those who have a relatively low-volume forefoot will not have a problem and the Free 5.0 2014 will work fine. My feet are average width (I can fit fine into most racing flats, which tend to be narrow), but may be slightly higher volume than average (i.e., taller top to bottom). Thus, the circumference of my foot in this area exceeds the circumference of the tunnel created by this restrictive overlay, and thus it’s a no-go for me. So my rec would be that if you have a wide foot, or a thick foot from top to bottom, these shoes may not work out for you either (and if you had a problem with the forefoot band on the NB MT10, stay away for sure!). Narrow or low volume, you’re probably good to go.

What frustrates me about this is that the shoe otherwise looks and feels great. I love the new sole, and the forefoot is roomy and has a nice stretchy feel to it. What’s more, the problem could be so easily fixed by just adding a gap of stretchy material into the overlay strap (maybe at the base of the lace row) to allow expansion for a higher volume foot. Seems like something that should have been caught and fixed in the development process. I’m hopeful that the Flyknit upper on the new Free 4.0 will perform better. We’ll see!

If you have a wide or high-volume foot and you’ve tried on the new Free 5.0, I’d be curious to hear if you’ve had a similar experience?

You just finished reading Nike Free 5.0 2014: A No-Go For Me! Consider leaving a comment!