I recently purchased a pair of Nike Lunarglide 5’s for a consulting project that I was working on. I didn’t really know much about the shoe, and it’s not one that I’d considered before because it has a bit more heel to forefoot drop than I typically like in a running shoe. But, when I tried them on at a nearby Nike outlet I was intrigued. Great looking shoe, very well made, super comfortable upper, and a nice cushy sole (the latter tends to work well for me). They did fit a bit snug through the midfoot, but I couldn’t help but take them out on a “real” run (i.e., not while filming on treadmill).

My first run in the Lunarglide 5’s didn’t go very well. About halfway through the 5 mile run my left arch started to hurt. It was a sharp, burning pain, and not something I have felt before. I thought maybe it was the snug (bordering on tight) midfoot fit that was causing the problem, and I decided I wasn’t going to run in them again. I wore them a bit casually, and then tried a thinner insole to create some additional space. The insole swap made them feel a lot better, so I decided to take them out for another run. No problems. Went for a few more. All good. I tried again with the original insole and all was fine – they may have broken in a bit, or the arch pain was just a flukey thing on that one run. Last week I took them out for a 12 mile long run and had no issues – I now have enough miles on them to be comfortable writing up a review. 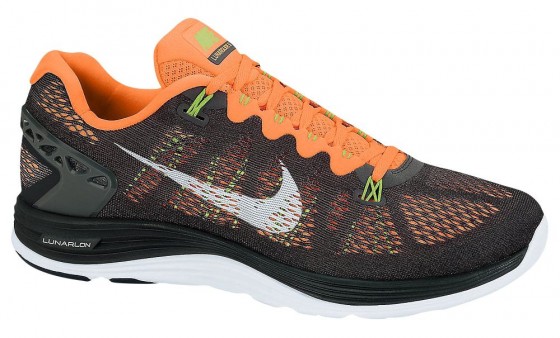 First off, the Nike Lunarglide 5 is a great looking shoe. It’s one of those rare shoes that I’ll wear simply because I like the way it looks. My pair are in gray and bright orange, and the combo works really well.

The upper consists of two layers of fabric separated by flywire bands that extend from the sole to the eyelets on each side (the orange strings that can be seen in the images here). The outer layer is a stretchy, open mesh, the inner layer is a more tightly woven fabric. The inner layer is stitched to the tongue on each side and has very few seams. It fits like a snug sock, and feels great against bare skin. At the back of the shoe there is a firm plastic cradle that wraps around the heel to provide support – I have not experienced any irritation from this. The ankle collar is well padded and lined by a soft material. Overall, I’m really impressed by the upper design and construction.

I’ve found the the fit of the Lunarglide 5 to be different than a lot of other Nike’s I’ve tried. I have plenty of room in the forefoot (and the stretchy upper in the forefoot is awesome), but the midfoot is quite snug. This has improved a bit as the shoes have broken in, but it’s something to be wary of if you have a high-volume foot. A swap to a thinner insole will help.

The Lunarglide 5 is a soft shoe. I’m a mild heel striker, but when I force a harder heel strike the softness of the heel becomes very apparent. And at 10mm drop (per Running Warehouse – 28mm heel height, 18mm forefoot; 9.6 oz in size 9), there is more sole underfoot than I typically need for my stride. If you like a soft shoe with a lot of heel cushion, these would be a fine choice (I find them somewhat similar to the adidas Energy Boost). The sole feels quite similar to the Nike Lunaracer, though the latter is a bit lower profile. Pair the Lunaracer sole with the Lunarglide upper and forefoot fit and you’d have one awesome shoe!

The Lunarglide has rubber in all major wear spots, and my pair is not showing any unusual or accelerated breakdown after about 30 miles on roads (note – I do tend to catch rocks in the forefoot grooves, not a big deal though).

I haven’t been wowed by this shoe, and on several occasions I’ve almost shelved it, but for some reason I keep coming back to it. I like the soft feel, I love the upper, I love the look. I don’t like the snug midfoot, but I can tolerate it.

The one big problem I have had with the Lunarglide 5 is abrasion and blistering along the inner ball of my right foot behind my big toe. I’m almost certain the reason for this is the soft midsole. I tend to pronate a bit more on my right side, and a soft midsole under the medial forefoot will cave as I reach max pronation. This can lead to excessive movement of foot relative to shoe in this area. I have similar issues in the Nike Pegasus, and in some models of Nike Free. Also had issues with the original Skechers GoRun. It seems to happen only in shoes with a soft medial forefoot that doesn’t provide a stable base. I don’t get it on my left side where I pronate less (I’ve had this asymmetry confirmed in a 3D gait lab), and I don’t tend to get it in firmer shoes. The blistering issue is significant enough for me that these will likely not get much use from me for running after writing this review, but I want to clearly emphasize that this is likely an issue resulting from a bad match between my own form and the shoe. If you don’t tend to get calluses/blisters on the balls of your feet, the Lunarglide 5’s may be fine.

You can see a rear view of my gait in the Lunarglides here:

The Nike Lunarglide 5 has a lot going for it, and I’ve enjoyed running in them (minus the blisters mentioned above), but it wasn’t an ideal match for my stride. I would recommend it as a solid lightweight trainer to people who like a snug midfoot fit, and who like a soft sole with a very cushy heel (maybe those with a prominent heel strike). The closest comparison I can come up with among shoes I have run in is the adidas Energy Boost, both in terms of fit and feel. If you like that shoe, the Lunarglide would be a decent alternative.

The Nike Lunarglide 5 is available for purchase at Running Warehouse, Zappos, and at Nike.com. Outside of the US they can be purchased at Wiggle.