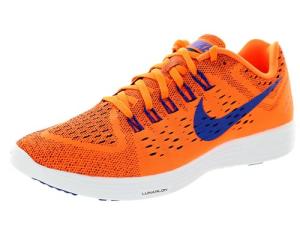 My mileage has been relatively low for the past few months as teaching (loving it!) and family responsibilities have taken up a lot of my time, but most of the miles I have run recently have been in the Nike Lunartempo (formerly called the Lunar Trainer – my pair still has this name printed on the tongue). The Lunartempo is a shoe that I heard raves about from fellow runners in the Running Shoe Geeks group on Facebook, and based on this feedback I couldn’t resist giving them a try. They’re a shoe that has grown on me with continued use, and I’ve been impressed by their versatility – it’s a shoe that should suit a wide variety of runners, and they should appeal to fans of shoes like the Saucony Kinvara, Skechers GoRun, and New Balance Zante/Boracay.

Per Running Warehouse, the Nike Lunartempo weigh in at 6.8 oz, and stack heights are 26 mm heel, 18mm forefoot (8 mm drop). MSRP is $110. The fit runs a bit small – I went up a half size in my pair, and would recommend doing so if you plan to try them out. 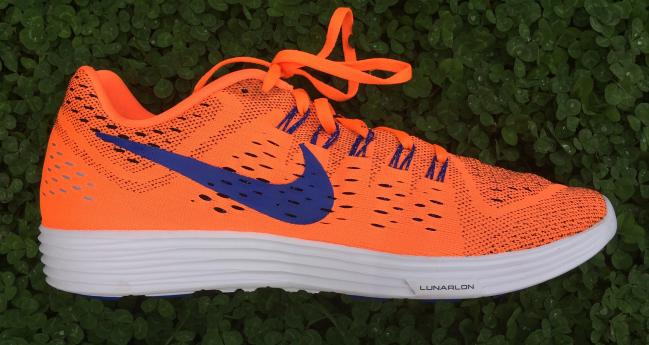 The upper of the Lunartempo is really, really nice. There’s really not that much to say about it – it’s minimally structured – no overlays, no real support elements beyond Flywire strings that attach from the sole to the lace eyelets. I don’t even think there is a heel counter – if present, it’s extremely flexible so as to barely be noticeable. The only area that seems to be reinforced is the front portion of the forefoot over the toes. The upper itself is a breathable, double-layered mesh, and it is largely seamless. I have not run sockless in them, but suspect they would be fine for that purpose. If you like a structured upper, look elsewhere, but for me the upper of the Lunartempo is near perfect.

As mentioned above, the Lunartempo does seem to run about a half-size small. The fit is otherwise nearly perfect on me – the forefoot is average width, and the heel and midfoot are comfortably snug. Though the upper does have a knit-like appearance, it does not have a lot of give to it, and the forefoot is fairly shallow. Not a lot of wiggle space for the toes if you don’t size up.

My previous experience with Nike Lunar shoes is limited to the Lunar Racer. Like that shoe, the Lunarlon midsole of the Lunartempo is fairly soft, particularly under the heel. If you like a soft ride (like Saucony Kinvara soft, not Hoka Clifton soft), these are definitely worth a look. At first I felt like the ride was kind of dead, but with each subsequent run they kind of grew on me. There’s actually a bit of snappiness in the Lunartempo despite the softish sole, and at around 7 oz I could see using these for races from the half to full marathon (not a lot of shoes in that weight-class that I’d use for double-digit racing). If you’re looking for a racing shoe that retains quite a bit of cushion, these should be near the top of your list.

The outsole of the Lunartempo consists of rubber pods under the forefoot and heel (blue in the photo above). The midfoot is exposed EVA foam. I’m not sure exactly how many miles I’ve put on the shoes (haven’t been using my GPS lately), but it’s a fair amount and the outsole is holding up well. There is a bit of wear under the outer heel of my left shoe, but that is a typical wear pattern for my stride. The Lunartempo is probably not a shoe that will last much beyond 200-300 miles unless you have a low-abrasion stride, but I’m pretty happy with how they have held up so far.

The Nike Lunartempo should appeal to runners who like lightweight shoes with minimally structured uppers. It could be an all-purpose shoe for those in that category. It is also worth a look for those who like more structure, but want a lighter shoe for speed workouts or race day. They retain a surprising amount of cushion for a sub-7 oz shoe, and would be suitable for long runs and longer races. They’re also a reasonably affordable shoe in a market where shoe prices seem to be skyrocketing more and more every year ($110 MSRP, thought they can be found online for under $75).

The Nike Lunartempo can be purchased at Running Warehouse.