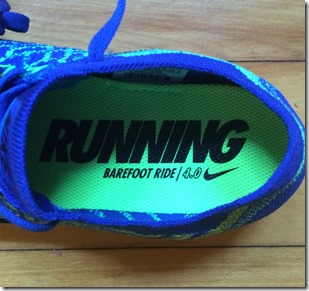 Nike has long touted the design of their Free line of running shoes as having been inspired by barefoot running. Indeed, the newest Free shoes have the phrase “Barefoot Ride” written right on the insole (see photo at left). Personally, I’m a fan of the Frees since they suit my preference for light, flexible, moderately cushioned shoes. However, despite their more minimal structure, I don’t think they really come even close to simulating the experience of running barefoot (few shoes do).

In my recent review of the Nike Free 5.0 I cited a study that compared running biomechanics in the Nike Pegasus and the Nike Free 3.0. This research has been out for awhile, but I never wrote about the paper. Since I’ve been running a bunch in various Nike Free shoes lately, I thought I’d write up a summary.

The study is authored by Richard Willy and Irene Davis and is titled “Kinematic and kinetic comparison of running in standard and minimalist shoes.” It was published in 2014 in the Journal Medicine & Science in Sport & Exercise. Here is the Abstract:

METHODS: Subjects were 14 male, rearfoot striking runners who had never run in a minimalist shoe. Subjects were tested while running 3.35 m·s(-1) for 10 min on an instrumented treadmill in a minimalist and a standard shoe as three-dimensional lower extremity kinematics and kinetics were evaluated. Data were collected at minute 1 and then again after 10 min of running in both shoe conditions to evaluate accommodation to the shoe conditions.

CONCLUSIONS: Running in a minimalist shoe appears to, at least in the short term, increase loading of the lower extremity over standard shoe running. The accommodation period resulted in less favorable landing mechanics in both shoes. These findings bring into question whether minimal shoes will provide enough feedback to induce an alteration that is similar to barefoot running.

Many runners choose a moderately cushioned shoe to transition toward more minimal footwear figuring that it is a safer approach than jumping right into a shoe with no cushion at all. Because of this, the authors were interested in determining if running in a cushioned “minimalist” shoe might more closely simulate barefoot-like running mechanics than a more traditionally cushioned shoe. To address this, they recruited 14 heel-striking runners and had them run in both the Nike Pegasus and the Nike Free 3.0. The Pegasus has about 20mm more cushion in the heel, and the cushioning in the Peg is also significantly softer than that of the Free. Each runner ran two 10-minute trials on an instrumented treadmill, one in each shoe, and biomechanical measures were recorded near the beginning and end of the trials to see if acclimation time to the shoes had any effect.

Contrary to expectations, step rate (both shoes just under 170 steps/min), step length, and foot inclination at foot strike did not differ between the two shoes. Even more unexpected was the fact that ankle dorsiflexion, vertical impact peak, and vertical loading rate were all significantly higher in the Nike Free 3.0.

Comparisons from the beginning to the end of the 10 minute run did not reveal any acclimation differences between the two shoes. In both the Pegasus and the Free 3.0 runners did not alter step length or rate, foot inclination and ankle dorsiflexion decreased, knee flexion at foot strike increased, and vertical impact peak and loading rate increased over the course of the run.

Contrary to expectations, runners in the Nike Free 3.0 exhibited higher impact and loading rates compared to when they wore the Nike Pegasus. Furthermore, they did not exhibit changes typical of barefoot runners such as reduced step rate and stride length, or reduced foot inclination at initial contact that is indicative of adopting a midfoot or forefoot strike. In plain terms, the Nike Free 3.0 didn’t do a good job of simulating barefoot running. Rather, wearing the barefoot-inspired shoe resulted in a more impactful stride.

So what might be going on here? The authors suggest that “In order to see a change in footstrike pattern that simulates barefoot running, the shoes may need to be as minimal as possible.” In other words, the Nike Free 3.0 has enough cushion that it does not encourage alteration of the running stride in the direction of barefoot running. However, it has less cushioning than a traditional shoe and is firmer than the Pegasus so continuing to heel strike in a shoe like this results in increased impact loading. I should point out that I have observed that almost 50% of runners in the minimally cushioned Vibram Fivefingers continue to heel strike, so it may be that no shoe really does a perfect job of encouraging a barefoot-like stride.

The authors further point out that loading rates in the Free 3.0 exceeded those reported for runners with a history of tibial stress fractures. Other research has found that transitioning into Nike Frees increases injury risk to a greater degree than transitioning into the Nike Pegasus or the Vibram Fivefingers (injury risk in the latter two did not differ). We don’t know for sure if increases in impact loading might explain the increased injury risk in Frees (it could be their extreme flexibility or some other factor), but the combined results of these studies suggest that caution is warranted when beginning to run in a flexible, moderately cushioned shoe like the Nike Free 3.0. At the very least, runners should pay attention to running form when transitioning into a moderately cushioned shoe as they will not provide the same level of protection for a runner with a high-impact stride.