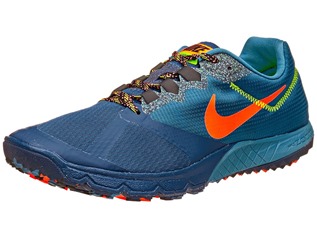 Reviewing road shoes during the winter in New Hampshire is very challenging. Once the snow begins to fall, we typically deal with a few months where sidewalks remain covered by snow and/or ice, and roads are narrowed by snowbanks. The latter makes roads especially dangerous to run if there is any traffic. This winter has been particularly rough up here, and I’ve seen very little bare asphalt or sidewalk since early January.

My typical way of dealing with winter running given the conditions I face is to switch to trail shoes. A trail shoe with decent lugs allows me to stay on the icy sidewalks, which is preferable to risking my life on the road. This winter my trail shoe of choice has been the Nike Wildhorse 2. I’ve been running regularly in this shoe since late January, and have now put enough miles on them to write up a review.

I chose the Wildhorse due to consistently positive feedback from trail runners (I was debating between this one and the Terra Kiger 2, but went with the Wildhorse since the Kiger 2 has already been reviewed on Runblogger by David Henry). It was also one of the top five trail shoes chosen by readers in my 2014 trail shoe survey. Combine the high praise with a good deal from Running Warehouse on a closeout color and I was sold. I’m happy to report that the shoe lives up to the hype – I’m loving it!

I’ll start by saying that the majority of my miles in the Wildhorse 2 have been on ice or snow covered sidewalks or on packed snow on trails near my house. There is no bare trail available up here this time of year, so I can’t comment on performance on dirt or mud. However, loose snow over ice is about as challenging as it gets for traction so I think I have a good handle on how they perform.

The Nike Wildhorse 2 is a 4mm drop trail shoe (22mm heel, 18mm forefoot) that weighs in at 9.3 oz in men’s size 9 (specs via Running Warehouse). I presume that the 10-14 printed on the medial sole near the heel refers to midsole heights and does not include the insole or outsole. I purchased a size 10.5, which is a half size up from my normal (but seems to be becoming my new normal!).

First things first, this is a great looking shoe. Nike almost always nails it with looks, and the Wildhorse 2 is no exception. I’m a fan of the blue and orange color combo on my pair, and love them as a casual shoe as well as for running (I wore them for about 30-40 miles of walking at the Disney World parks a few weeks ago…).

What I love about the upper of the Wildhorse is its simplicity. Unlike many trail shoes, the upper is fairly minimally structured. There is minimal stitching, the overlays are welded on, and the heel counter is thin and soft. It feels almost like a Nike Free style upper on a trail shoe. The mesh over the forefoot is tightly woven yet breathable, and it’s warm enough that it has worked well on many sub-freezing winter runs. I have seen a bit of pilling of the upper mesh near the medial forefoot overlay, but no real fraying or tearing at this point. It is something I’ll keep an eye on though.

Internally, the Wildhorse upper is almost completely seamless from the midfoot forward – there is just a bit of stitching at the junction of the midfoot and forefoot on each side. The interior lining is a soft, sock-like mesh and seems like it could handle sockless running without too much issue (have not tried this myself yet – too cold up here). One issue I did have initially was some friction at the back of the heel associated with heel slippage. I was worried that I might get some blistering, but the problem seemed to resolve itself after a few runs.

The potential downside of the minimally structured upper is that the Wildhorse lacks features like a rand at the junction of the sole and upper, and the toe bumper is fairly small. It’s also worth noting that the sole lacks a rock plate. This is probably not the trail shoe for highly technical trail running, but for less extreme conditions it should be fine.

The fit is one of the areas in which this shoe really shines. I’d compare it to the Nike Free 4.0 Flyknit, but a bit more dialed in. The shoe hugs the foot nicely through the midfoot, then opens up into a wide forefoot that allows some room to move. However, the forefoot volume from top to bottom (vertical volume?) is not huge, so the foot feels secure.

Since I run most of my miles on roads with the occasional stretch of trail mixed in along the way, I typically look for trail shoes that can function well on both surfaces. This typically means flattish lugs and a somewhat forgiving midsole. The Wildhorse fits the bill well as a hybrid shoe that can handle both surfaces. On roads it has almost a racing flat type feel (love it!), and the lugs are prominent enough that they have allowed me to run on crusty ice and loose snow without any falls so far. I have also run some on packed snow on trails and they have performed quite well.

In addition to the fit, another thing I love about the Wildhorse is the fact that I can feel the zoom air unit in the heel. I first noticed this while walking and standing in the shoe – you can kind of bounce up and down on the air cushion. Unlike the Terra Kiger, however, there is no air unit in the forefoot. This gives the forefoot a firmer feel, particularly on harder surfaces. This is combo of a soft heel and firmer forefoot meets me preferences perfectly, though I’d be lying if I said I’m not tempted to try the Kiger out given my experience with the Wildhorse.

One thing to consider with regard to the air unit in the heel is that because it has some give, and the heel tends to sink in, I suspect that this shoe is functionally almost a zero drop shoe. In fact, among trail shoe I have run in I’d compare it most closely to shoes like the Altra Superior or Lone Peak, or maybe the Topo MT.

If you like a trail shoe with a low volume yet wide forefoot, lugs that can handle both road and trail miles, and a heel that is forgiving with a bit of bounce, the Wildhorse would be a great choice. I just signed up for a 10 mile trail race in May and the Wildhorse is likely the shoe I will wear on race day – it has served me very well this winter and I expect that it will handle bare trails as well as, if not better than the snow and ice I have been subjecting it to.

The price point for the Nike Wildhorse 2 is $110, and some color combos can be purchased for less than $90 on sale at Running Warehouse. Outside the US it is available at Wiggle UK. Purchases made via these links help support this site – thanks!