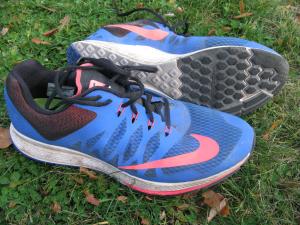 I haven’t followed Nike’s offerings for that long. In fact, the only Nike shoe I’ve spent time running in prior to this year was the Nike Zoom Streak XC 3 (now sold, with an updated upper design, as the Zoom Streak LT 2). This year I’ve run in three Nike shoes: Terra Kiger v1, Kiger v2 and the Zoom Elite 7. Just like I was pleasantly surprised with the Kiger, and quite impressed with the Kiger 2, I was also somewhat impressed with the Elite 7 when trying it on. I had tried on the Pegasus 31 not long before, and while the Elite 7 has some similarities to the Peg 31 (even beyond its looks), I found the fit and feel of the Elite to be a little more to my liking.  The main differences are a lower drop at 8mm compared to the 10mm of the Peg, firmer midsole, forefoot zoom unit (Peg 31 only has one in the heel) and slightly lower stack heights.

I’ve now run well over 75 miles in the Zoom Elite 7, about 50% on road and 50% on mostly hardpack, non-technical trail.  Below are my thoughts at this point. 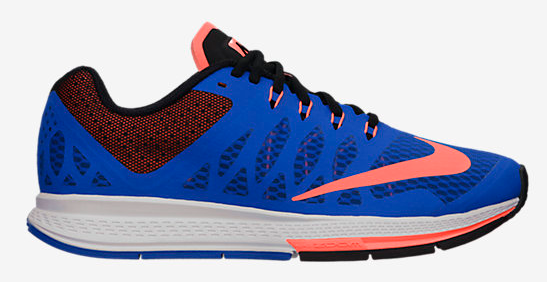 Price: $110 MSRP (the color I bought is now on sale at Running Warehouse here)

Colorways: 6 colors that I’ve seen (5 on Nike’s site here and the initial launch color that I purchased that is now on sale )

This is one area where I really think Nike did well with this shoe.  Before getting to the good stuff, I should mention that I had to cut the arch area away on the sockliner/footbed because it seemed to cause blisters on my arch at times. I did this on the Kiger and Kiger 2 as well – since the interiors of all three of the Nike shoes are completely seamless it appears to be a footbed-specific issue.  Not a problem overall because it is fixed very easily with some scissors. It’s just somewhat annoying to have to do this to every new Nike shoe that I buy.

The Elite 7 has a very nice internal liner and I’ve had no problem running sockless in them.  The overlays hold the foot well, and the material seems very durable.  It has a similar construction to the Kiger where it has an outer mesh (in the Elite 7’s case with some thin welded overlays instead of the engineered mesh), an internal liner, and flywire sandwiched in between.  The fit is probably medium width in the toebox, with the shoe running just a bit long to me (1/4 size maybe).  The lacing is slightly asymmetrical, which didn’t cause any problems, but I usually don’t prefer it.  The only slight issue I had with the fit is that I felt that the heel collar, while well padded, extended up a bit too high.  This only caused a small hot spot one time (on a 2.5 hr run), but it is definitely a design flaw in my mind…probably irrelevant if you wear socks.  Overall, another example of Nike’s use of quality materials and construction methods at a decent price.

Lots of similarity to the Pegasus 31 in design and appearance of midsole.  Firmer and notice somewhat rockered geometry that creates the “roll” in the ride.

While the Elite 7 is designed as an uptempo running shoe, its stack height is somewhat substantial.  Additionally, while the midsole material is firmer than, say the Pegasus 31, it is not as firm as most racing shoes.  The shoe is fairly stiff longitudinally though, and that, combined with the “crash rails” on the lateral side of the shoe, give the ride a rolling feel (akin to, but not as pronounced as, a Pearl Izumi N1/N2).  While this may or may not be a good thing, depending on your preference, the end result is that the shoe is not that flexible, but still runs fairly nimbly despite the lack of flexibility.  It has a zoom air unit in the forefoot, along with a solid patch of rubber outsole on the forefoot, which provides great protection across the metatarsals.  That protection is no doubt the best feature of the ride for me; lots of help for tired feet without the weight of a full blown trainer.

There are some problems with the ride for me, however.  Mainly it has to do with the outsole design in which there are pretty stiff crash rails on the lateral side with no rubber under the medial heel. This leads to feeling your heel dump medially on initial contact.  It stabilizes for me pretty quickly once I’m on my forefoot, but I find that I’m compensating for it, and after awhile I get fatigued at trying to weight my forefoot earlier than normal.  This could have been easily fixed if Nike had just extended the medial heel rubber over another two inches.  I’m fine with not having rubber on the arch area on a road shoe, but I think the heel needs it on the medial side (unless the entire outsole is EVA and not rubber, like the inov-8 Road-X Lite 155).

Nice outsole other than glaring omission of medial heel rubber.

Other than the lack of medial heel rubber, the outsole design is pretty good for a road shoe.  I like the lateral midfoot coverage, something many shoes don’t have, which, if you land midfoot, tends to eat up the exposed midsole.  I like the solid rubber forefoot that gives great protection over the metatarsals, and the rubber seems to be holding up very well even though I’ve run at least 35-40 miles on trails.

The Nike Zoom Elite 7 is a really nice shoe overall with one issue that may or may not be a major one depending on your gait: the lack of rubber under the inner heel.  For me it has really detracted from what otherwise is a great all-around shoe that even handles trails quite well.  All in all, I would recommend the shoes with the caveat that for some (maybe most) you will notice some lateral buildup relative to the medial side.  If Nike fixed this one issue, I would call them one of the best versatile trainers out there that could go long or fast and not feel bad at either.

The Nike Zoom Elite 7 is available for purchase at Running Warehouse, Amazon.com, and Nike.com. Outside of the US they can be purchased at Wiggle. Purchases made via these links provide a small commission to Runblogger and help to support the production of reviews like this one – thanks!