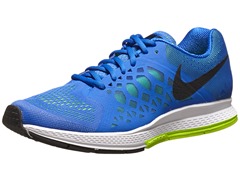 For a long time I would not have considered trying a shoe like the Nike Pegasus. I generally like shoes that are lighter and lower profile, but over the past couple of years I’ve come to realize that a higher drop shoe will work fine for me if it has a relatively soft heel. I think a soft heel alters the functional drop of a shoe for me – compression of the heel under weight makes the drop feel lower than it actually is.

My first experience with the Nike Pegasus came when I bought a pair of the Peg 29 for a consulting project I was working on. I tried them on at a Nike outlet and was surprised by how comfortable they were (I often have trouble with Nike’s being too narrow). They had a very soft feel underfoot, and I couldn’t help but take them for a run. On the run they felt great, but I started to experience some abrasion along the ball behind my right big toe. This is very common for me in shoes that have a soft forefoot – I tend to pronate more on my right side and have a tendency to cave in the inner border of shoes with soft forefoot midsoles. You can see this phenomenon in action in the video below:

When Nike released the Peg 31 I had heard from fellow shoe geeks that they made the shoe a bit firmer, particularly under the forefoot. Given my experience with the Peg 29, I couldn’t resist giving them a try – a similar ride with a more stable forefoot might just do the trick. A few weeks ago I headed over to my local running store to try a pair on. They fit well and felt good underfoot, so I brought them home with me (Disclosure: these shoes were a personal purchase).

I’ve now run almost 50 miles in the Nike Pegasus 31, and overall I have to say I’m incredibly impressed. By specs, the Peg 31 is very much a conventionally structured running shoe with a lot of cushion. My size 10 pair weighs in at just over 10.5 oz, and Running Warehouse lists the stack at 31mm heel, 18mm forefoot (the 4-5 mm thick insole adds a bit more to that) Note that Nike claims 10mm drop for the Peg – I had a hard time measuring due to the integrated upper liner so could not confirm, but I think it’s higher than 10mm. In any case, the Peg 31 is probably the highest drop shoe that I’ve put this many miles on since 2009-2010.

What’s surprised me the most about the Pegasus is that the shoe doesn’t feel like a 12mm+ drop shoe. I can go put on an old pair of Asics Kayanos (probably from 2008) and feel the high drop, but not so much in the Peg. It think the difference is in the softness – my old Kayano feels hard and stiff, more like I’m standing on a wooden ramp. My heel sinks into the sole of the Peg and gives it a cushy, lower drop feel. Similar experiences with shoes like the adidas Adios Boost and New Balance 1400v2 have really changed how I use drop data to choose shoes to try and review. I’ve come to think of static drop as a number that describes unloaded sole dimensions, and it’s thus not always a good descriptor of how a shoe feels on the run.

On the run, the Peg 31 feels cushy under the heel (there is a zoom air unit under the heel), and the forefoot stability is much improved over the Peg 29’s in the video above. I haven’t taken any video of myself in the 31’s, but I haven’t had any issues with ball of foot abrasion which suggests that the problem has been fixed. They also just feel firmer and more responsive under the forefoot.

I’ve done two runs of over 10 miles in the Peg 31’s, and they worked very well for the long stuff if you like a cushy ride. It’s still a bit more shoe than I’d choose to race a marathon in, but for easy runs they feel great. The closest comparison I can come up with is the New Balance Fresh Foam 980 (review coming soon!). And between those two I’d take the Peg 31 due to a better fit up front (the Fresh Foam has a very pointy toebox).

Regarding fit, the Peg 31 fits my average width feet snugly but not uncomfortably in my usual size 10. I typically go up a half size in Nikes (e.g., all Nike Frees), but that was not necessary in these. I did find the forefoot a bit constricting in terms of volume while sitting, but once you stand up you compress the sole a bit and it opens things up. I also swapped out the included insole for a thinner one for my first few runs to break the shoe in a bit, then put the original insole back in. This is a practice I often adopt in shoes with a slightly tight fit. 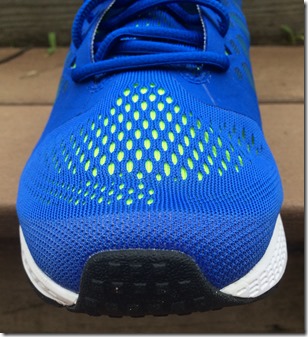 One of the things I like most about the Peg 31 is the upper. It’s a thing of beauty – Nike knows how to make a great-looking shoe, and this one is no exception. Might be one of the best looking shoes I have in my collection right now.

The forefoot is composed of engineered mesh that allows some stretch (see photo at left), which helps to improve the fit. Internally, the upper is lined by a bootie-like layer that is truly seamless from the midfoot forward. It’s incredibly comfortable, and feels great without socks. The only problem I have had is some abrasion at the base of my big toenails on both sides – I think this comes from some reinforcement of the upper over the big toe (I can’t see it internally, but the material is slightly thicker in this area). Interestingly, I have only had this issue with the included insoles – swapping them out for something thinner must create just enough space to reduce any rubbing that is occurring.

I’ve already covered sole feel pretty well, but a few comments are warranted about the outsole. There is a lot of rubber under this shoe, and as a result I expect durability shoe be quite good. I’d guess you will see the softish midsole start to break down before you eat through the rubber outsole. One thing I like about the outsole design is that there is a horizontal break that creates a flex groove between the midfoot and forefoot (between the yellow and black areas in the photo below), and another about midway forward on the forefoot. This gives the Peg fairly decent flexibility.

The Nike Pegasus really surprised me – it’s been a long time since I’ve run a decent number of miles in a more traditionally structured running shoe, and the Peg 31 has been working really well. It’s a great looking shoe that offers a cushy heel and responsive forefoot, and that’s a good combo for me. It’s more shoe than I’d use in a race, but for eating up easy miles it’s a fine choice.

The Nike Pegasus 31 is available for purchase at Running Warehouse and Nike.com (or your local running specialty store). Outside of the US they are available at Wiggle (UK).