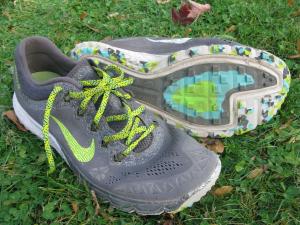 It hasn’t been that long since I first wrote about the original Nike Zoom Terra Kiger in my June review.  I was pleasantly surprised by the shoe and found it very nice for smoother trails, and even mixed runs as the shoe ran quite well on pavement.

Only a short while after my review I started to see rumors that a version 2 of the Kiger was already on its way. Although I’m sure nobody from Nike read my review, it seemed they had read my mind based on what I was hearing regarding updates in version 2. Firmer midsole, more secure upper, better heel stability. Given that these were all things I had pointed out as needing improvement in the first version, I was eager to give the v2 a spin.

Price: $125 MSRP (one color is on sale on Running Warehouse here) 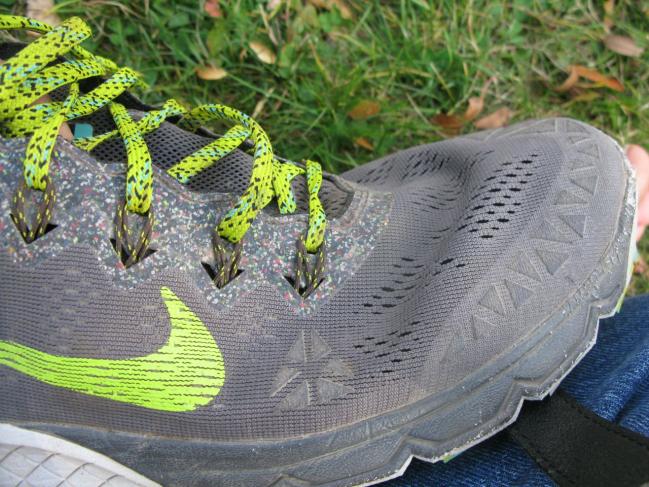 The Kiger 2 upper and fit is at the top of its class – in my opinion, it’s one of the best uppers on the market today. It provides one of the best, most secure, yet not confining fits that I’ve tried.  They are just super comfortable and yet very secure at the same time.  I wish they would put the engineered mesh style upper on more of their shoes.  It is extremely durable and yet very light and simple.  On the Kiger 2 there are fewer gaps in the the mesh which makes it more durable, and there is less give in the upper than the Kiger 1. 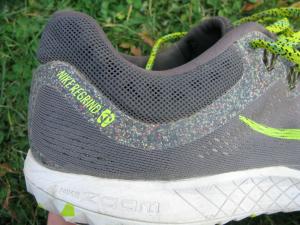 The tongue is slightly less padded than that of the Kiger 1, but actually feels better. The heel collar is also less padded and yet feels just as comfortable.

Nike used their regrind material as overlays mainly in the heel area to increase structure. It works well.  The Kiger 2 feels much more secure laterally in the upper, and many of the problems I had with the heel being unstable in the Kiger 1 are remedied because of this (and changes to the midsole which I will get to below).

Bottom line, the Kiger 2 represents some of the best upper design I’ve seen yet in a shoe, and I’ve tried a lot of shoes. The Kiger 2 is at the top of my list. 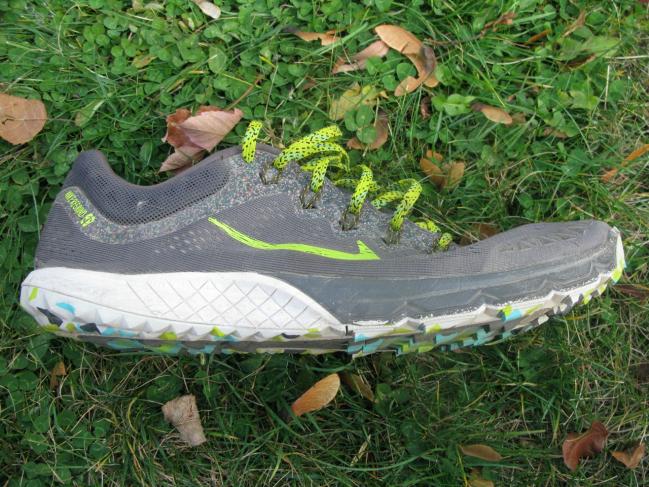 The midsole on the original Kiger was nice, but overall felt just a little too soft. In particular, the heel of the original Kiger was much too soft (it had a dual density foam with a softer compound in the heel), which I think created most of the instability problems that I experienced on technical terrain with that shoe.  The Kiger 2 was updated with a single density midsole throughout, and feels firmer overall.  The result, while not changing the DNA of the shoe, was a huge improvement for me.  It made a shoe that was iffy at best on technical terrain to one that could cover the gamut of almost any trail conditions.  As such, I ended up using the Kiger 2 for half of the Rut 50k and it performed very well on terrain that it is not ideally designed for…after that race I was convinced that they had fixed the stability issues on more technical terrain.  There are not many races in the US that cover more technical terrain than the Rut 50k.

Though the ride is incrementally sharper and firmer, don’t be turned off by that if you prefer softer shoes.  It’s not even close to the firmest shoe I’ve run in, and still feels softer than most inov-8’s, Merrells, or a shoe like the New Balance 110v1. The added firmness gives it more stability, precision, protection from rocks, and support for longer runs.  The midsole update is what really makes the shoe.  The upper is an added bonus, but the upper change alone would not have fixed the majority of the problems I had with Kiger 1. The new midsole does. 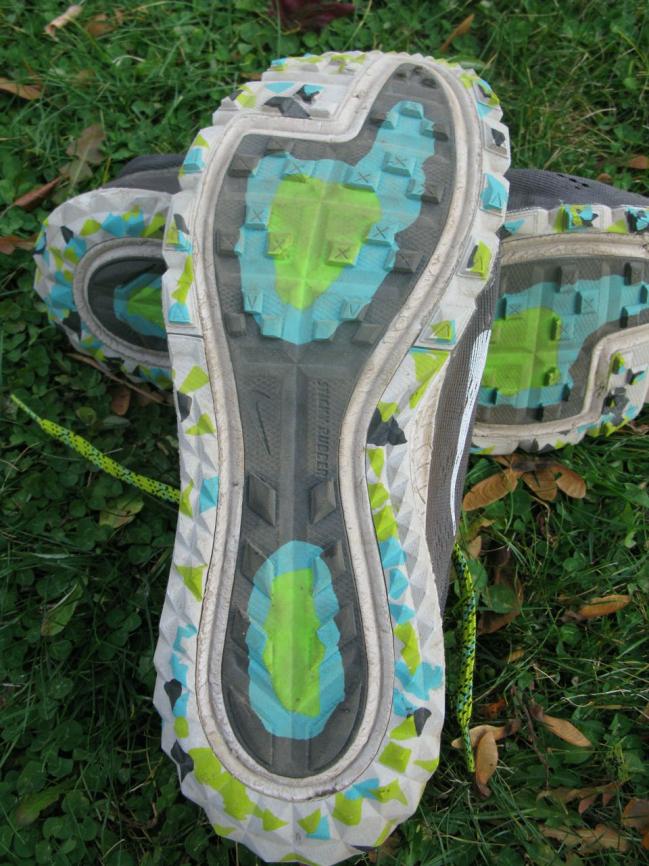 Nike Terra Kiger 2 Outsole. Soft rubber in the middle, regrind (which is much harder) on the outside. Still not crazy about outsole design, but the harder rubber on the outside does hold up better.

Here lies the last issue I had with the Kiger 1, and it remains largely unchanged on the Kiger 2.  The outsole design is the same; not the greatest IMO and still sporting the ridiculous heel design, although I didn’t cut it off this time. This seems to confirm that the outsole design was not the main culprit in the instability of the heel I felt in the Kiger 1 (the soft midsole seems to have been the problem).  The only thing changed on the Kiger 2 outsole is the use of a regrind rubber on the outside rubber piece where the Kiger 1 had the softer sticky rubber across the entire outsole.  The benefit of this is that the regrind rubber is more durable (much harder rubber) and contributes to a little more precise edging.

The heel lug pattern is still as bothersome to me as it was before.  It just adds weight while giving nearly no usable traction benefit.  If they can dial in the outsole without messing up the rest of the shoe for version 3, it really would be the best all around lightweight trail shoe on the market.

The Nike Terra Kiger 2 is a fantastic shoe overall. Even with the bunk outsole design, it still might be the best lightweight trail shoe on the market.

If you run mostly in minimal shoes, try the Kiger 2.  You will enjoy the extra cushion and responsiveness of the midsole while still feeling right at home with the fit and flat feeling of the sole.  If you run in more substantial footwear, I’d also recommend the Kiger 2 as it will feel light and nimble yet not leave you hanging in any area.  There is enough stack height and protection that it feels substantial, yet still fast.  A very impressive achievement for a shoe a shoe in the low 8 oz range.  Highly recommended!

The Nike Terra Kiger 2 is available for purchase at Running Warehouse and Nike.com. Outside of the US they can be purchased at Wiggle. Purchases made via these links provide a small commission to Runblogger and help to support the production of reviews like this one – thanks!