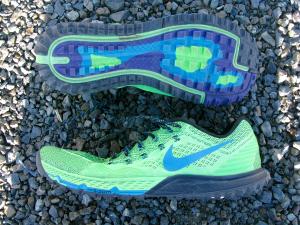 The original Zoom Terra Kiger was one of my first shoe reviews, and after carving up v1 to better suit my liking, Nike released a fantastic update in the Zoom Terra Kiger 2.  Other than retaining the original outsole design, which I thought was still lacking, the shoe was tweaked in just the right way in the midsole to create a much more protective, sharp, and stable ride. Kiger 2 also retained a light and fast feel with a fantastic upper, which is still one of the best uppers I’ve ever stuck my foot in. One of my closing lines of my Kiger 2 reveiw was, “If they can dial in the outsole without messing up the rest of the shoe for version 3, it really would be the best all around lightweight trail shoe on the market.”  Read below to see how it turned out. 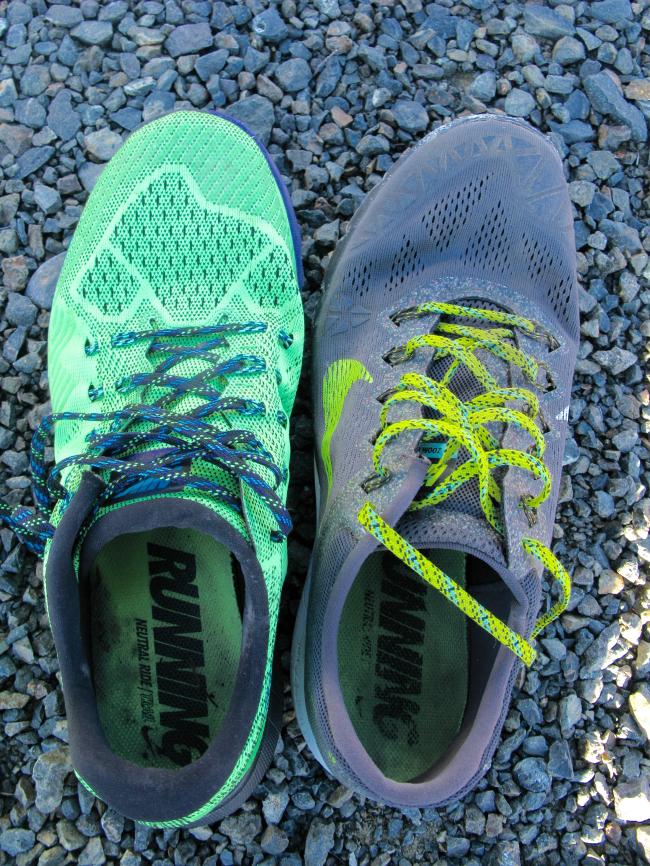 A little wider and more open mesh in forefoot. Less structure around eyelets with the removal of the regrind rubber and more structure in the heel.

The Kiger 2 had one of the best uppers I’ve ever experienced on a shoe.  It was light and minimal, but  just supportive enough that was super comfortable and still handled a lot of abuse.  There was feedback from some folks that they thought the toebox was a little shallow.  I personally didn’t feel that to be the case, and never had any issues.  The Kiger 3 uses a very similar material with engineered mesh openings in various parts of the upper.  Bigger holes in the forefoot for better ventilation aren’t hurting anything and the design looks nice.  After that though, there are a few changes I don’t like.  First, it is just not as snug or precise of a fit as the Kiger 2.  It is definitely wider in the forefoot and a taller toebox than v2.  Additionally, the heel collar is much more built up than v2, with more padding and a thin counter that creates more structure. It just doesn’t fit as close and comfortable as the heel on the Kiger 2.

One last minor thing (but the little things do make a difference), the re-grind rubber they used on Kiger 2 to line the eyelets and parts of the tongue help blunt some of the pressure from the laces and allow for a snugger fit with less discomfort.  I think I miss the Kiger 2 heel collar the most, and the snugger more secure fit next.  The regrind was just a nice touch that helped overall. 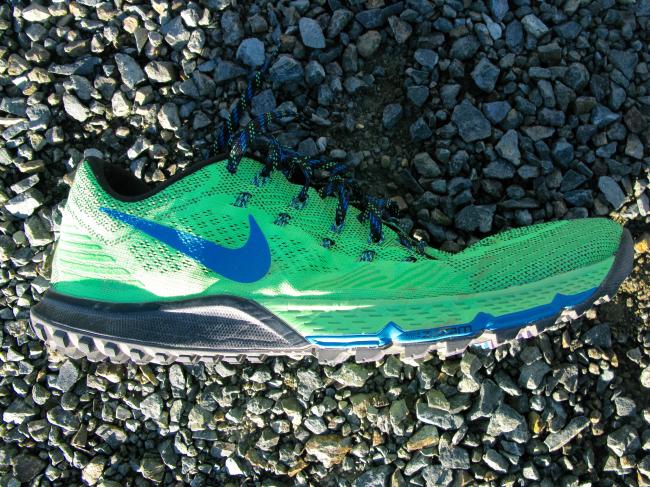 Stack height is 3mm higher at 24H/20FF compared to 21H/17FF of the Kiger 2. Dampens the effect of the Zoom units for me.

The upper on the Kiger 3 is more of a minor deviation from v2, but the midsole and ride have changed a little more substantially.  It wouldn’t seem like much;  3 extra mm of stack height, and possibly a little softer durometer of Phylon.  It looks deceptively similar to the Kiger 2, but the ride is quite different.  It feels more substantial, stiffer and not as sharp or racy as the Kiger 2.  It is much more protective and more supportive for long runs, but what I really enjoyed in the Kiger 2 was its mix of cushion and racing shoe feel. That combo is now nearly non-existent.

The extra stack height and outsole also dampen the effect of the Zoom Air units for me, and that was one of the highlights of the Kiger 2.  Those light and protective pockets of air really allowed for a nice ride on such a light shoe.

The last gripe for me with the midsole is that the whole platform is 3-4mm wider at the forefoot (the heel is nearly the same).  This creates a more substantial feeling shoe all around, and one that is less nimble on technical trail, especially when side-hilling.  All that said, if not comparing the Kiger 3 to its predecessor, the ride falls in a sort of middle ground of responsive, protective and cushioned.  It is not really one or the other, but a pretty even mix of all three, somewhat similar to a shoe like the Pearl Izumi Trail N1 or Brooks Pure Grit. It’s not a bad shoe, and it’s still versatile as a trail shoe.  It just doesn’t feel like a Kiger anymore. 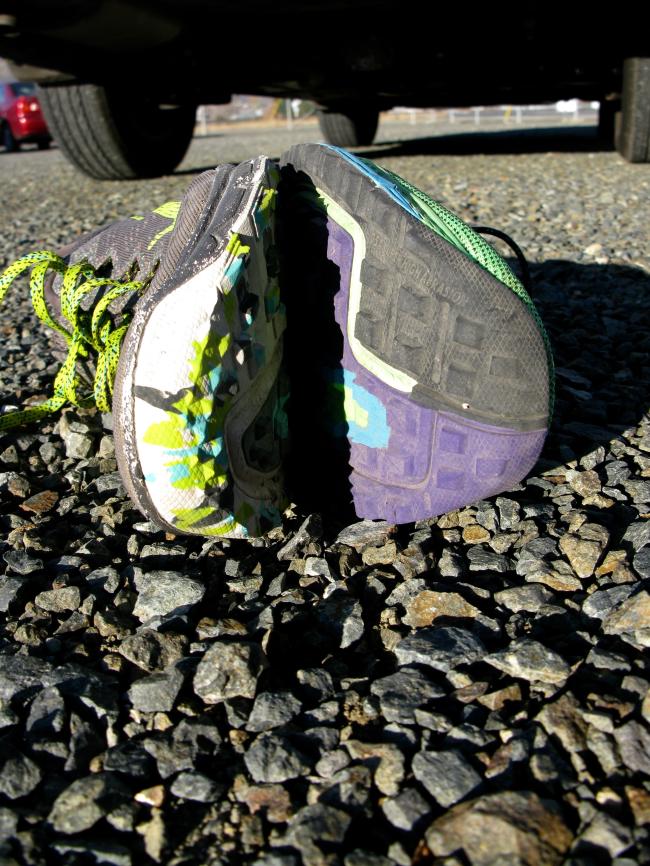 Wider forefoot overall on the Kiger 3 and those Kiger 2s have more miles on them so are relatively mashed out and wider than a new pair would be. 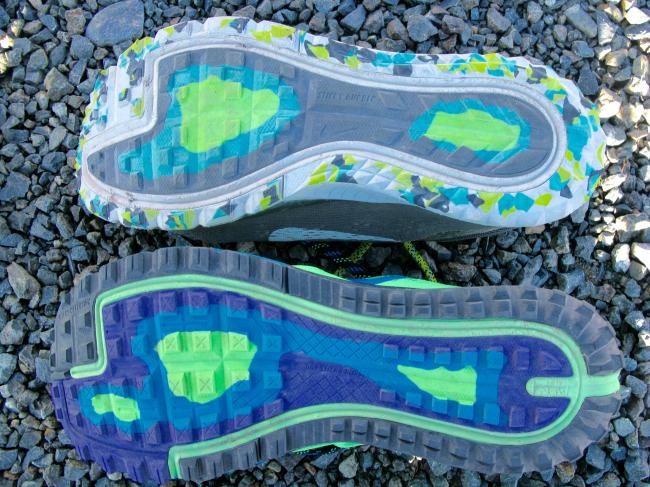 Not a huge change in outsole design other than the fact that the piece under the big toe is now fully connected to the edge. Lug design is the biggest change and contributes to the more substantial feel.

The outsole on the Kiger 3 makes an attempt to address some of the shortcomings of the v1 and v2 outsole.  First, it closes the “outsole ring” at the big toe.  I wish they’d have just closed it all the way around, but what they did do creates a little more control at toe off and edging on that medial side.  Second, the lugs are deeper, there are more of them, and the heel actually has lugs that provide some traction, albeit with a rounded design that still adds too much weight with little benefit.

I initially thought I would like the extra lug, but it turns out that it contributed to ruining the ride for me.  The shoe now has very little float (some small sliding on foot strike) on downhills, and instead just sticks on landing and robs responsiveness from the midsole.  This goes back to reaffirming my view that shoes with deeper or more lug need less stack height and narrower profiles.  The Kiger 3 increases the stack height and widens the profile.  The result to me is a shoe tha doesn’t run that light and nimble anymore, but straddles the lightweight and neutral trail categories, with a quasi all-mountain style of outsole which doesn’t mesh very well with the midsole setup for me. 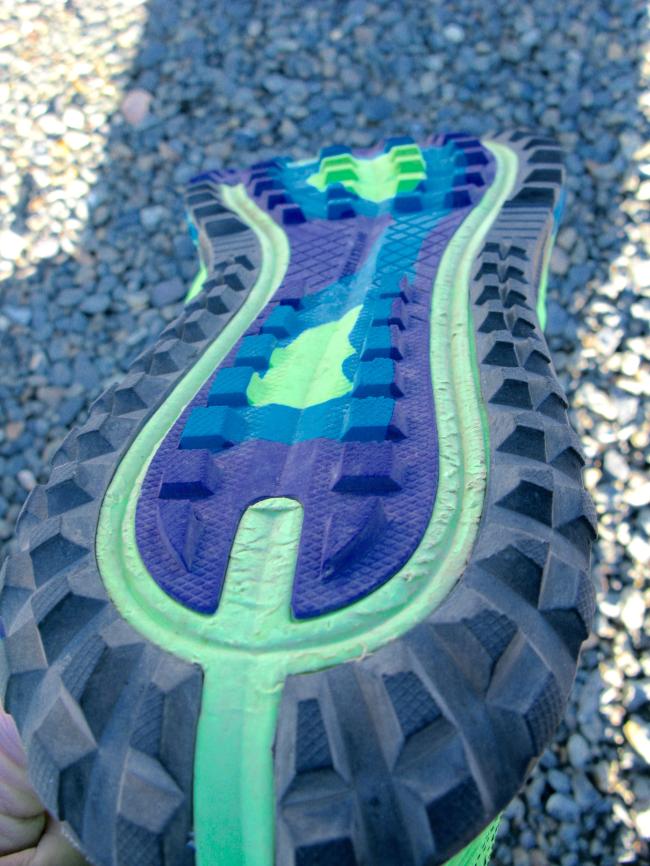 Those black lugs are a very hard, high abrasion compound and those on the lateral midfoot decrease the float substantially. Also too much of the outsole is high up on the rounded heel…those lugs will hardly ever touch the ground but add weight; not a design I’m fond of.

Well shoot!  The Kiger 3 really doesn’t turn out to be the update I was hoping for.  That said, it doesn’t mean it is a bad shoe. It still has a lot to offer, especially to the runner who wanted more shoe than the Kiger 2. As with most of Nike’s current offerings, the materials and construction are top notch. It just didn’t match up in the ride department to what I had grown used to with the Kiger 2.

My thoughts on my final run in them before this review was that the shoe is really a much better successor to the Wildhorse 2 than the Kiger 2.  It retains the same 4mm drop as the Wildhorse 2, the deeper lugs, and a slightly more protective, yet less focused, ride.  If you liked the Wildhorse 2, I think the Kiger 3 is really a nice update that offers a lot of what that shoe offered with a better upper, outsole and Zoom Air in the forefoot, with probably more protection overall.  The new Wildhorse 3 is really is in its own category, and a pretty different shoe from the Wildhorse 2; much softer, more drop, wider, and more substantial all the way around.  To me, this leaves a gaping hole to fill in the Nike lineup for a true followup to the Kiger 2; something that stays in the 7-8 oz range, features full coverage outsole with shallower lugs and a narrower/sharper platform.  I’d really like to see a shoe that blends the Kiger 2 with a shoe like the forthcoming Zoom Streak LT 3 – now that the Kiger 3 and Wildhorse 3 have been beefed up, the doors are wide open for that shoe to have its place.