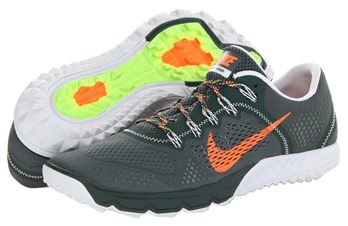 For a brand without a strong history in the trail market, Nike has created quite the buzz with their latest offerings: the Nike Zoom Terra Kiger and Nike Zoom Wildhorse. Both shoes have a lot of features that will appeal to a wide range of runners, and Nike has even gone so far as to create a brand new Trail Running Team (good info on the team here) that snatched up a lot of young, speedy trail runners to sport the new shoes in races all over the world.

Before getting into a review of the Kiger, I wanted to point out some of the few minor differences between the Wildhorse and Kiger, since they are quite similar overall (same platform essentially).

The main differences as I see it from trying both on (I have not run in the Wildhorse) are in the design of the upper. The upper on the Wildhorse has a little more volume, doesn’t use the burrito wrap design, doesn’t have Flywire, and uses a different, more supportive mesh. The only change to the midsole from the Wildhorse is that the Kiger has a zoom unit (a piece of Nike technology that is inserted that uses air to cushion rather than EVA foam) in the forefoot and heel where as the Wildhorse only has one in the heel. Lastly, while sharing essentially the same outsole and midsole shape, the tread is slightly different on the two shoes. Normally I wouldn’t bring up so many features of a shoe I wasn’t actually reviewing, but in this case they are similar enough that I thought it was worth mentioning.

Now on to the Terra Kiger review…

Stack Height: 23 mm Heel; 19 mm Forefoot stack height for both men and women (midsole heights of 10-14 mm are actually etched on the side of the shoe)

The Kiger is a very nice looking shoe, and looks fast while remaining fairly simple in design. Overall the design should appeal to a wide range of runners. It’s relatively light, well cushioned, and at 4mm drop still meets much of the market for this type of shoe. The design of the upper is great and definitely a highlight for me. It’s the first shoe where I felt the burrito wrap design actually worked. 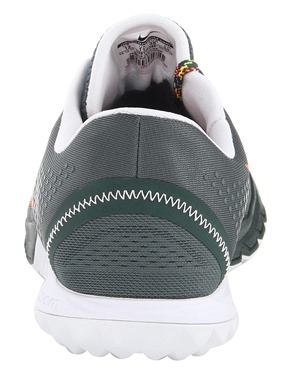 My biggest issue with the Kiger is in the sole design, particularly in the heel. The midsole shape in the heel is very fat for a racier shoe, and because the outsole curves up the side and back of the heel and doesn’t actually make contact with the ground, this adds instability and unnecessary weight to the shoe. As far as I can tell this design serves no purpose. The tread on the heel is also terrible with a shallow pyramid design that neither gives traction, nor stability of any kind.

After two runs in the the shoe (and a few near ankle sprains), I took out the razor blade and grinding wheel and got to work (see comparison pictures below).  After shaving all the excess outsole and thinning the width of the midsole, I can happily say the shoe runs much better. I put about 20 miles on the stock version and 30+ on the modified version and it almost feels like a different shoe on single track trail or uneven ground. Oh, and it dropped nearly 15 grams (0.5 oz) off the shoe which is not insignificant for a shoe in the 8 oz range. 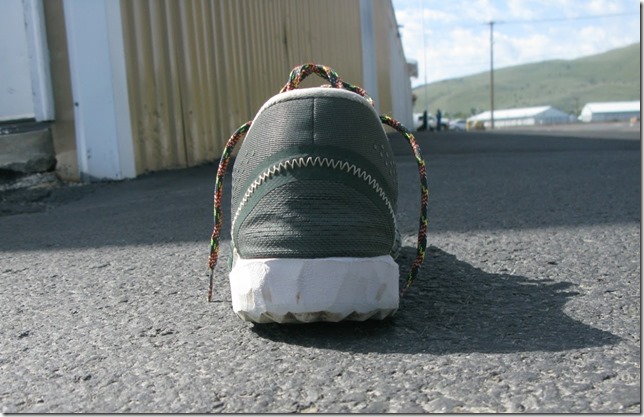 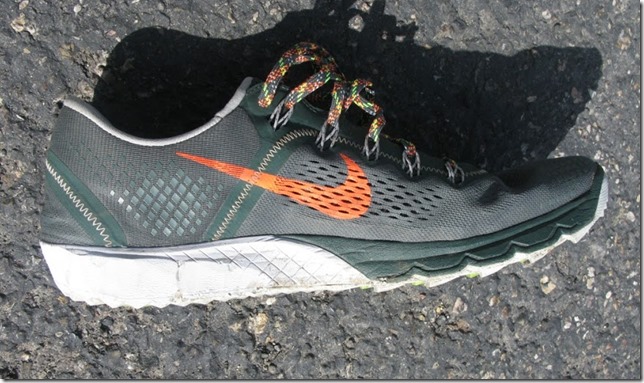 This is where Nike really shines in my opinion. Likely because of their size and the breadth of products that they design and offer, Nike has a ton of fabulous materials to deploy on their shoes. They really show this off in the Kiger upper.

The upper material has a Flyknit-like pattern to it (to be clear it is not a Flyknit upper) that they call engineered mesh where the mesh has different weave densities in different locations. This material is awesome as it is super light and simple and, so far, has been very durable. I’ve taken them off-trail, through brush and other abrasive objects, and there is not a sign of wear on it. The interior of the upper is equally impressive with a full liner next to the foot and a super soft heel that does not have a heel counter. It is one of the softest uppers I’ve run in. I’ve run sock-less in this shoe for every mile even in 85+ deg F heat and no issues at all.

I’ll comment more on the midsole in the ride section, but the foam is high quality (I’ve seen conflicting pieces of info that it is full length Phylon and other places report that it is a dual density Cushlon ST in forefoot and Cushlon LT in heel…I have not been able to confirm one way or the other prior to review).

The outsole material is fine overall, if not a little too soft of a compound (the lugs are wearing pretty quick). The tread pattern, especially in the heel, is silly in my mind as it adds a lot of weight with no tangible benefit. I also don’t understand why they didn’t just have a complete full outsole without the line of exposed EVA separating the edges from the middle of the outsole. This creates a much softer edge for the shoe which decreases its precision and edging in more technical terrain. Complaints aside, the traction is adequate on dry surfaces. I have not run them in mud, but would expect them to be lacking due to the relatively shallow lug depth.

The fit is fantastic in comfort and average in security. It is a pretty low volume fit with a low toebox height and a more sock-like cut to the entire upper.

I’m mixed about the use of Flywire in the upper. While I haven’t had any major problems, the midfoot lockdown and lateral stability on the platform is not as good as what I’m used to with inov-8 or Merrell shoes. I’ve come to terms with this though and just don’t use the shoe on more technical terrain which requires a more secure fit (and a sharper midsole; more on that below). If the upper wasn’t as comfortable as it is, I’d be unhappy with the security of it; as it is, the fit is still very nice and comfortable for even long outings. 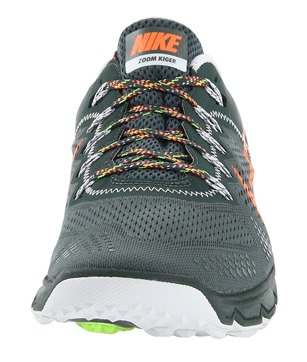 I found the Kiger hard to place regarding the ride. On one hand it does feel somewhat responsive and quick and on the other I felt it was somewhat soft compared to what I’m used to. Shaving the heel off did help the stability of the ride in the heel on uneven ground. I’d also say the softness is less noticeable on very hard pack trails, and is almost welcome on pavement. I guess this reaction is probably due to my experience with and bias towards firm and responsive shoes.

In its favor, the Kiger is the first shoe of any appreciable cushion and softness that I’ve actually grown to like for hardpack trails. It seems like every time I run in it I like it more than the run before, so part of it may be just needing to get used to the softer shoe.

Nike is off to a great start in the trail running market with the Zoom Terra Kiger. There is room for improvement with the heel shape/fatness, midfoot fit, outsole compound, and tread pattern (including upgrading to a full outsole). However, when taken as a whole the Kiger still gets more right than it gets wrong and I really can’t think of another trail shoe out there that offers the same fit and feel.

Regardless of your preference regarding cushion, I think there is something to be found here for everyone and that may be the Kiger’s biggest selling point. If you prefer more cushion, the Kiger will offer enough to feel comfortable and will likely feel fast and light for you. If you come from a minimalist/natural running perspective the Kiger still is a fairly light, low drop, and flexible shoe that will offer just a little more cushion than you might be used too (but, like me, you might grow to like it). As far as Nike trail running shoes go, this is as good as it gets. For any Nike Free fans looking for a trail option this would be the first shoe I would start with. I’m even considering given the Wildhorse a try to see how it compares on the run.

I’m going to give the Nike Terra Kiger a positive recommendation and look forward to future improvements.

The Nike Terra Kiger is available for purchase at Running Warehouse and Amazon.com, and outside the US it can be purchased at Wiggle or direct from Nike.com. Purchases made from these retailers help support this site – thanks!