Observations on Cadence Change With Running Speed on the Track

I did a 5x400m track workout on Wednesday (was supposed to be 6×400, but lightning and torrential rain put an early end to the workout!). As usual I was wearing my Garmin 620, and one of the cool features of the watch is that it computes your cadence for you without any additional gadgets or equipment needed. The workout consisted of running 400m at about 20-30 seconds faster than 5K pace, walking about 100m for recovery, then jogging 700m or so to prep for the next 400.

Every once in awhile I’ll check my stats out on Garmin Connect, and I happened to glance at the cadence graph for the workout – I always forget that the 620 does on-board cadence recording. Anyway, here’s what the graph looked like: 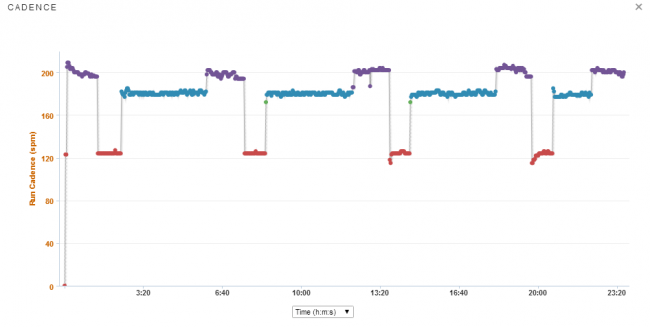 I was struck by the regularity of the pattern – it’s almost like shifting gears. My walking cadence was around 125 steps/min, easy run cadence (8:00-8:30 min/mile) about 179-181 steps/min, and my fast running cadence (5:30-5:40 min/mile) was 200-203 steps/min. The pattern repeated almost perfectly with each cycle – my body settled into it’s preferred cadence for each speed/gait.

I’ve written before about the “myth of the 180 cadence,” which is basically the erroneous suggestion that everyone should aim to run at a cadence of 180, and I covered the topic extensively in my book. Though I do tend to run right at 180 at my easy pace, my cadence clearly changes with speed. Once I push the pace under 6:00/mile I’m up around 200 steps/min. 180 is not a magic number, and it’s not a number that every runner should aim for at all times.

Knowledge that cadence varies with speed influences my approach to dealing with runners as a coach and in the clinic. For example I’ve found that with my beginner 5K group cadences are often quite low – many are under 160 steps/min. But, I’m hesitant to change this since they are typically running 11:00/mile pace or slower when they first start out. Cadence will vary with pace, and this needs to be taken into account when assessing whether someone has a possible issue with overstriding (some beginning runners do, others do not).

In the clinic I often find that overstriding tends to be a bigger issue when runners increase speed. Since speed is a function of stride rate and stride length, some runners will increase speed by upping cadence, others will tend to try to reach out front with the leg and overstride (watch the final 0.10 of a local 5K and you will see a ton of this). Yet others can make use of good hip extension to increase stride length on the back side.

As an example of the latter, below are some data that I compiled from a video of the 5000m men’s final taken by physical therapist Jeff Moreno at the 2012 US Olympic Trials:

Based on the filming frame rate provided by Jeff, I was able to calculate cadence for each of the runners from the video (order is the order in which they pass the camera at this point of the race, not the final finishing order; details on the other measurements can be found here):

Aside from the fact that none of these elites were running with a cadence of 180, what I found interesting is that many have a cadence as many as 10 steps/minute or more lower than my fast running cadence at a pace that is well over a minute per mile faster (the winning time was 13:42, which translates to an average pace of 4:24 min/mile). I would likely attribute this to the elites having greater range of motion at the hip, with much greater hip extension than me. They can accomplish increased stride length through massive hip extension, whereas I, lacking that ability (I’m tight!), need to increase cadence to get to a higher speed.

(Note: If you are unclear what hip extension is, it’s basically the extent to which the thigh swings backward toward the end of stance through toe-off – the picture below of Ryan Hall demonstrates hip extension well.) 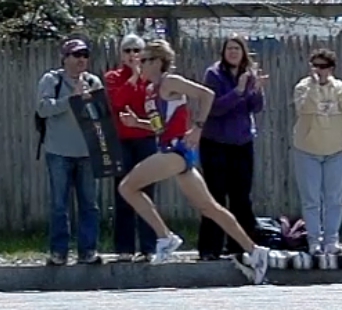 Supporting this, here’s another graph from a 4×400 workout I did last week in which I went near max effort on the run reps (which, sadly, is still 10-20 seconds per mile slower than the elites in the race above manged for a full 5k!): 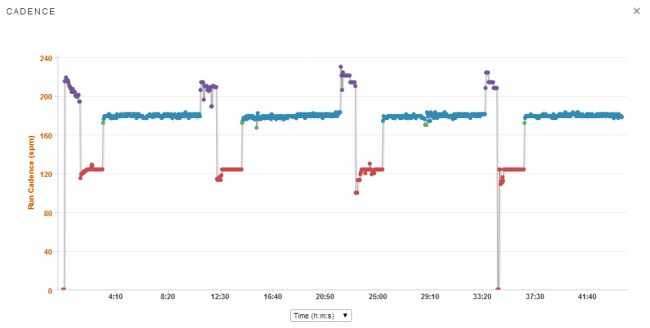 At 4:40-4:50 min/mile my cadence shoots up to 210-220 steps/min. And you can also see the effect of fatigue coming in a bit in the purple dots above – on a few of the reps my cadence starts out high then trails downward as I slow down during the lap. I have some very interesting data from a 5K race I ran which I’ll share sometime as well – has some bearing on fatigue and gait change.

So what did I learn from all of this? For me, cadence is very consistent at a given pace on the track, and I seem to rely on cadence increase to accomplish faster speed than the elite 5000m runners do. Makes me wonder if I spent some time working on hip drive and hip mobility if that would benefit my speed…

You just finished reading Observations on Cadence Change With Running Speed on the Track! Consider leaving a comment!