Oldest Leather Shoes found in Armenia: Minimalist Running has Deep Roots, or Does It??? 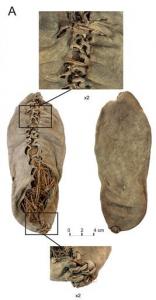 Archaeologists recently found a pair of 5,500 year old leather shoes in Armenia, making this the oldest leather shoe ever found (you can see a picture of the shoes to the left – picture taken from Boston.com via AP Photo/Department of Archaeology University College Cork). The shoe is made from a single piece of leather laced up the heel and down the midline of the midfoot and forefoot.

The shoe was stuffed with grass, though it is unknown if this was for insulation, to be used as a lining, or simply to maintain the shape of the shoe. My hypothesis? The grass was there to beef up the heel to make sure the ancient Armenian wearing it wouldn’t suffer injury due to heel striking while running. Alternative hypothesis? The grass was an ancient pronation control device. No word yet on what the heel-toe drop is on this shoe, but I’d be willing to bet that it’s zero – if they let me borrow it, I’d be happy to measure it with my bar clamp technique!

In all seriousness, this is a pretty cool story, and what I find most interesting about it is that it shows that humans have been wearing shoes for an awful long time, and it would be really interesting to know just how far back shoes like this existed. You can read the story in its entirety here: http://www.boston.com/news/science/articles/2010/06/09/oldest_leather_shoe_steps_out_after_5500_years_1276119049/.

You just finished reading Oldest Leather Shoes found in Armenia: Minimalist Running has Deep Roots, or Does It???! Consider leaving a comment!