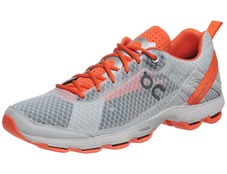 The running shoe world is full of companies claiming technological innovation in their footwear. Some of these so-called innovations are nothing more than gimmicks used to spin a good story in an effort to market and sell shoes, whereas others seem to actually provide some positive benefit. Some shoes have both – non-functional gimmicky technology as well as useful innovation in the same shoe (the Brooks PureCadence is a good example).

When I first saw the On Running cloud shoes my immediate gut response was that they were a total gimmick. On is a new company out of Switzerland, and like most shoe companies they incorporate a featured “technology” in their shoes (think Gel, Wave Plates, forefoot lugs, DNA, etc.). In the case of On, the technology consists of rubber pods on the sole that they refer to as “clouds.” The clouds collapse flat on contact, providing cushioning, and then once compressed they have little ridges that lock together to provide a firm base for push-off. At least that’s the idea.

I actually put off accepting a review pair of the On shoes for quite a long time because I wasn’t certain that they’d be a shoe that I’d like to run in. But, after hearing from a few readers that they liked the shoes, I decided to accept a pair of the On Cloudracers for a trial (disclosure: the shoes reviewed here were media samples provided by the manufacturer). So how well do they actually perform? Are the cloud pods a revolutionary technology that will forever change the running footwear landscape?

Of all of the On shoes, the Cloudracers are the most minimal, and would be classified as their racing flat. They are 6mm drop according to Running Warehouse (24mm heel:18mm forefoot), and weigh in at about 10oz in my size 10.5’s. The weight is an issue for a racing flat – in a market where most flats weigh in at 6oz or less, the Cloudracers are downright heavy. On likes to tout research conducted by the Swiss Federal Institute of Technology which apparently shows that subjects running in On shoes have a lower heart rate and lower lactate levels. I’d be interested to see the study since I’d like to know what shoe they were compared to – it has been repeatedly shown in the scientific literature that about a 3oz increase in shoe weight reduces running economy by 1%, and most competitor shoes to the Cloudracer weight at least 3 oz less, and in some cases as much as 6 oz less.

The weight of the of the Cloudracers is almost surely a result of the outsole, which features the rubber “Cloudtec” pods (more on this in a minute). The rest of the shoe is indeed quite minimal and really pretty nice. The upper is a very breathable, barely-there mesh with minimal overlays (you can see right through the upper in the photo above). The ankle collar is lightly padded and comfortable, and I had no issues with blistering or hot spots. Internally the Cloudracers are outfitted with a 5mm cushioned insole, which is fairly thick compared to other flats. The insole curls up medially to provide arch support, which is good or bad depending on you preference. Without the insole arch support is minimal. not sure how to describe it, but I really like the construction of the tongue.

The fit of the Cloudracers is fairly snug – you can tell from a top view of the shoe that like most flats, it’s not built on an anatomical last. That being said, I don’t find them constrictive and they’re fairly comparable to a Saucony Kinvara in terms of forefoot width. I did order a half size up in the On’s, and this was probably unnecessary as they fit a bit long on me. If you are considering them, order your usual size.

The sole of the On shoes is clearly the main selling point, and it’s what they’re marketing hard. As mentioned above, the idea behind the cloud pods is that they compress on contact, and once compressed, provide a firm base for push-off. You’ll notice in the side-view photo above that the pods on the heel are made of thicker rubber and are larger than those on the forefoot – this is important because it really speaks to who this shoe is designed for.

On my first few runs in the Cloudracers (I’ve run in them 5-6 times now) I honestly didn’t feel like they provided particularly notable cushioning. In fact, they felt rather firm to me, which isn’t necessarily a bad thing, but it’s not what I was expecting. I actually enjoyed running in them, though I wasn’t blown away, and the weight of all that rubber on the sole had a lot to do with that. I think that the issue for me is that most of the time I land either flat or only mildly to the forefoot or heel. The pods on the forefoot are thin and don’t provide much cushion, so the ride felt pretty firm. If you like a firm shoe that’s great, but the shoes are advertised to feel like “clouds,” and they definitely did not feel billowy underfoot.

After a few runs in them, I decided to try to consciously emphasize a heel strike. That’s when I had the a-ha! moment. When you land with a pronounced heel strike the heel pods provide fantastic cushioning, and the transition from heel to toe is really pretty nice. But, since I have to force myself to run this way and it feels awkward, I can’t keep it up for too long.

On does have a video in which they compare a heel-strike landing in their shoes to a more traditional running shoe, and it does look like the On shoes reduce vibration in the calf muscles a bit (not sure how much to conclude from this, and I’m sure the difference depends a lot on what you choose as the comparison shoe):

My conclusion is that the technology in this shoe is really designed for a pronounced heel-toe gait – big billowy pods on the heel to cushion initial impact that give way to thin, minimally bouncy pods on the forefoot that allow for a firm push-off. Thus, if this is how you run (and upwards of 90% of runners do run this way), I think the shoes do behave as advertised and could be a good choice. However, if you’re a midfoot or forefoot striker, there are better options that weigh much less.

Even if you are a heel striker, the weight of these shoes will likely be a turnoff if you’re looking for a racing flat (even the Brooks T7, which has a pretty substantial heel lift, weighs 3-4 ounces less). Dealing with this issue will be a challenge for On since the podded sole would seem to require a heavy rubber construction. This is a big drawback to building a shoe company around a signature technology – can you make an On shoe now without the Clouds? This is very similar to the position Newton is in – can they make a shoe without the forefoot lugs or are they bound to include them in every shoe they ever produce?

Aside from the weight, the other big issue with this shoe is the price tag. At $129 MSRP a shoe needs to really blow you away to justify paying a premium, and this one just doesn’t do it for me. I can spend $40-50 less and get a pair of Saucony Grid Type A5’s that weigh a 4oz less and provide just as much cushioning under the forefoot, or a pair of Brooks T7s that have plenty of cushion under the heel. In this sense the On’s are a also lot like Newton shoes – you pay a premium for the shoes and had better be pretty convinced that they’re going to be the best thing ever to justify the cost (incidentally, Newton also preaches durability, but On states on the Cloudracer webpage that you can expect to get 4-5 marathons out of them – I suspect the upper will be the first thing to break down). Do you want to spend $129 for a shoe that may only last 100-125 miles per the manufacturer’s own webpage? Not sure I’d recommend that risk. I’d guess that other shoes in the On line will have improved durability, but that comes with increased weight and in some cases an even higher price tag.

So to conclude, the On Cloudracers are a decent shoe, and what I thought would be a gimmicky technology does seem to work pretty well with a pronounced heel-striking gait. However, they are rather heavy for a racing/speed shoe and they’re pretty expensive for a shoe that the manufacturer claims will only get you through 4-5 marathons worth of mileage.

If you are inclined to buy a pair of On Cloudracers, they are in stock at Running Warehouse.