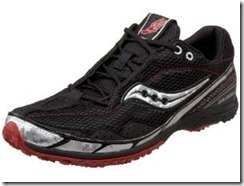 Though I am personally an advocate, I’ve done my best to keep an open mind about the benefits and pitfalls of stride change and migrating to a more minimalist style shoe. I realize that there is not a lot of evidence out there supporting a change, nor is there much evidence supporting maintenance of the status quo given existing injury rates.

My basic position is that the decision is an individual one, to be made by each runner after weighing their current situation and the potential pros and cons of a change. For many, it is simply a matter of taking a leap of faith. While I don’t necessarily think that every runner has to strive to run only in an ultra-minimal shoe and a migrate to a midfoot strike (and the other stride changes this entails), I have become a believer that doing so has the power to allow at least some subset of people to overcome nagging injuries and run pain-free. How big this subset will prove to be is yet to be determined, but anecdotes that I read and emails that I receive have convinced me that form change and more minimal shoe choice is worth a shot if your current approach appears to not be working.

As an example of this, I’d like to share an email I received a few weeks ago from a runner named Bob C. Bob’s story is a great one, because it shows how someone can find new running success by changing shoes and form, how overdoing the transition can cause problems in and of itself (as he readily admits, one must be more gradual and careful in transition than he was), and how he is frustrated by the lack of an ideal shoe to meet his needs.

If Bob’s story is similar to your own, please send me an email or share it in the comments. The more stories that we can tell about how people have overcome injury and run pain free by changing shoes and form the better, and the stronger case that can be made for the approach. Furthermore, we still need to continue to push education about how to transition carefully so that people like Bob don’t get hurt in the process.

Finally, I want to thank Bob for allowing me to re-post this – I appreciate it! You can find out more about Bob and follow his story at his blog, Bob’s STILL a Triathlon Newbie.

It’s been 4 weeks since I broke a 2nd metatarsal running on hard surfaces in my racing flats.  I got my flats in early September in preparation for my first-ever Olympic-distance triathlon (1.5K swim, 40K bike, 10K run).  The shoes (Saucony Kilkenny – see picture at top of post) gave me the Winged Feet of Mercury, immediately slicing 30 seconds per mile from my 4 mile training runs, taking me to a 9:00 PR pace for the distance (with rolling hills).

My last prior 10K was nearly 25 years ago (I’m now 54).  I stopped running when the pain in all my leg joints didn’t go away for days after even mild training runs.  I was a hard heel-striker then, with flat feet, skinny weak ankles, and slightly bowed legs.  Getting into triathlon 2 years ago meant I needed to find a new way to run.

First I went with shoes that would keep the road as far from my legs as possible (Mizuno Wave Creation 10), which made a return to light running possible.  But I was physically unable to go much faster than a fast jog.  I added orthotics, which helped a little.  Then I got knee pain (chondromalacia caused by ITB Syndrome), and I searched for a new stride.  I then read about POSE and Chi Running, adopted a mid-sole strike, and 3 months later my PRs started to improve, though they soon topped out again.

Then in August of 2009 I lost my L5-S1 disc: It simply degenerated away, leaving no padding and lots of pain behind.  Since I had by then become addicted to each of the triathlon sports, I refused the offered spinal fusion surgery and endured months of physical therapy to learn how to live with a damaged back.  And in February of this year I became a forefoot runner: Any significant heel contact would cause intense pain at the site of my degenerated disc, so I had no alternative, since I refused to give up running (and triathlon).

My initial web searches failed to uncover any useful forefoot running resources.  I had to feel my way into forefoot running on my own.  The first thing I noticed was that the towering heel of my Mizuno Wave Creation 10 was hitting the ground way too early, and was forcing me to run either on my tip-toes or in a slight squat (in order to avoid a painful heel impact), each of which caused other problems (ITB and PF).

I switched to an old worn-out pair of Asics that had a much softer and slightly lower heel.  By mid-summer my PRs again started to improve.  Since I wasn’t placing as much weight on my midfoot, I removed the heavy orthotics, and saw another improvement in my PRs.  At this point, I was much more comfortable running a mile than walking one!

When a friend suggested racing flats, I went to each of my local specialty running stores, tried everything, and when I finally tried the Kilkenny, it was love at first step.  I got the shoes, trained well, did my race, beat my optimistic goal time, and kept on running in my racing flats.  I searched the local shops for road shoes that would have a heel compatible with a forefoot strike, but found nothing that fit my narrow flat foot.

In hindsight, a stress fracture was inevitable.  Sure, it was not smart to run exclusively on hard surfaces in racing flats.  But I also must share some blame with the shoe market, for not having a road shoe available that would fit my foot and running style, and also be stocked by local shops.

While I now consider myself to be a minimalist runner due to my forefoot stride, I also realize I’m also a ‘maximalist’ runner:  Maximally ignorant, that is.  It took me way too long to learn the running vocabulary, which is the only way to get useful search results (when entering any area of specialization, first becoming ‘buzz-word compliant’ is mandatory).   Where are the running glossaries?

I’ve reached the point where I’m willing to believe that my ideal road shoe, a padded racing flat, may simply not exist.  And I’m wondering what I can do about that situation.  So far, I’ve come up with five options:

1. Accept the situation: Do what’s needed to adapt to the best fitting shoe available that has an acceptably low H2T drop.  But I’m concerned I’ll have to adapt my stride to the point that I’ll have problems switching back to my racing flats before races.  And I refuse to give up my racing flats!

2. Find a shoe that’s ideal in all respects OTHER than H2T drop, and have a cobbler slice away some foam to remove the excess heel height (a trivial task for any qualified cobbler).  This would require a shoe with minimal heel structure, lacking things like wave plates and air/gel layers.  The Brooks Green Silence may be a candidate, which I’ll try out after my foot finishes healing.

3. Eliminate all hard-surface running, except for final race training and race day.  Which means I keep running in my racing flats, but only on sand and turf.  Not an easy thing to accomplish in my densely packed suburb, but not impossible (just impractical).

4.  Add a thin Sof Sole gel cushion to the forefoot of my racing flats.  I’ve already done this, just for insurance, but I doubt it is enough to prevent another stress fracture.  And I haven’t yet run in the modified shoe, so it may prove unworkable.

So, there’s Bob’s story – one with both ups and downs, and one that will hopefully progress in a positive way once his fracture heals. bob and I have had some thoughtful discussions about shoes since this initial email, and it’s clear that he, like me, is an experimenter and is determined to figure this out.

Once again, I’d love to hear your stories if you have them – feel free to post a comment or send an email!