On Human Variability, Running Shoes, and Running Form: The Importance of an Individualized Approach 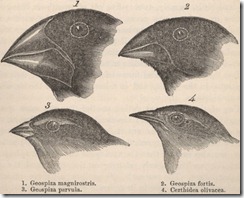 I open this post with an illustration of the Galapagos Finches and their variable beak anatomy (illustration by John Gould) – my reason is to emphasize a point. As an evolutionary biologist, I’ve spent much of my life studying anatomical variation, and I think it’s sometimes easy to forget that we humans are animals just like any other. As such, we also exhibit anatomical and physiological variability just like any other species does. Variability is the raw material upon which natural selection acts, and without it these finch species would not have evolved variable beak anatomy to specialize in different food niches, and we humans would not be the exceptional distance running species that we currently are.

One of the points I consistently try to make here on Runblogger is that runners are highly variable. Even among elites, form is variable, as I attempted to point out in a post on gait variability in elites at the 2011 Boston Marathon (and also in this post on the 2010 Boston Marathon). As such, I don’t believe there is a one-size fits all “ideal” running form, nor do I think there will ever be one footwear option that will be best for all runners. I do believe that we evolved to run barefoot, and that barefoot is the human default, but some of us are so far removed from ancestral anatomy and physiology that running barefoot or in a barefoot-style shoe might not be a good solution. Genetics, history of past footwear use, dietary habits, and history of past physical activity (most of us didn’t grow up running 10k barefoot to school each day!) all conspire to make us the variable species that we are.

I’m constantly reminded of variability when I write shoe reviews. A shoe that I find too firm might be a favorite of a friend, and a shoe that I find plenty wide might be too tight for someone else. Any shoe review that I write is from my perspective, and should be considered with this in mind. What works for me may not work for you, and vice versa.

Another reminder about human variability comes when I read the scientific literature on running biomechanics. Non-systematic results are commonplace, meaning that different people respond in different ways to a given intervention (whether it be footwear type, a stride change, etc.). For the remainder of this post I want to give an example of variability that I think really emphasizes this point quite well.

Yesterday I was reading an article by Clarke et al. from a 1983 issue of the International Journal of Sports Medicine. The title of the article is “Effects of Shoe Cushioning Upon Ground Reaction Forces in Running.”

In a nutshell, the authors were attempting to determine the effects that running shoes of varying midsole hardness have on the forces that the body has to deal with during the stance phase of running. They had 10 runners run across a force plate a number of times in shoes with very firm and very soft midsoles (pace was 6 min/mile), and then compared the results between the two types of shoe – the goal was to compare extremes along the spectrum from firm to soft shoes since that would be expected to result in the maximum difference between the two conditions.

Before we dig into the results, here’s a quick reminder of what a vertical ground reaction force plot looks like for a heel-toe runner: 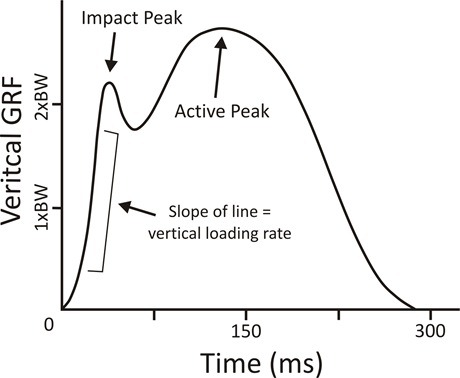 On the vertical (Y) axis is the value of the vertical ground reaction force as a function of body weight. You can think of this as how much force the ground is applying vertically through your foot as you run. The horizontal (X) axis shows time in milliseconds. The curve depicted on the graph shows how vertical GRF changes from the point of initial contact of the foot with the ground (time 0) to the point where the foot leaves the ground on toe-off (about 300 ms in this example). What you’ll notice in this graph is that there are two distinct force peaks. First, the impact peak is the initial force applied to the foot by the ground at initial heel contact (remember, this graph is for a heel-toe runner). Full body weight is not being applied at this point, so the impact peak is basically a function of the weight of the foot and lower leg hitting the ground. The active peak represents the force applied by the foot and supported body weight during roughly mid-stance. Notice that it is larger than the impact peak – this is the typical pattern.

Clarke et. al (1983) measured the height of the vertical impact peak, the time it took to reach the vertical impact peak (which gives info about how fast the impact force was applied), the height of the active peak, as well as a few other gait variables. Keeping in mind that the shoes being compared were at opposite extremes of the firmness spectrum, the results were quite interesting. First, and somewhat surprisingly, they found no significant difference in the height of the impact peak between the two shoes. In other words, the magnitude of the impact force was the same on average whether a runner was wearing a soft shoe or a firm shoe. The time it took to reach the impact peak was found to differ, with the softer shoe delaying the impact peak by about 4 milliseconds on average (this means that the softer shoe tended to slow the application of the impact force, which is probably a good thing). Third, they found that the active peak (they refer to it as the propulsive peak) was significantly higher on average in the softer shoe.

In summary, just looking at the average results, softer, cushier shoes do not appear to reduce the impact force, but they do slow down the rate at which the force is applied to the body (much as a boxing glove would slow the rate at which impact is applied to your hand if you punched a brick wall). Softer shoes also result in higher forces at mid-stance – the authors suspect this might be related to greater heel penetration into the midsole during stance, allowing the calf muscles to exert greater propulsive force under the forefoot on pushoff (if the heel sinks into the misdole under pressure, it is effectively decreasing the heel-forefoot drop).

These results, particularly regarding impact force, seem somewhat counterintuitive – runners generally believe that greater cushioning will reduce the magnitude of the impact force, and heavy runners are often directed to maximally cushioned shoes for this very reason. But, this ignores the fact that our body is pretty darned intelligent, and our legs adapt their stiffness to the conditions underfoot (read this post for more on leg stiffness in running). Thus, when running in a firm shoe, our knees tend to flex more than they do when we run in a soft shoe – by changing properties of the midsole all we do is shift cushioning from one place to another (underfoot to say the knee joint), and the magnitude of the impact force stays the same.

What’s really interesting about this study is when you look at the individual results, which are quite variable. Two individuals exhibited no impact peak at all, and their results thus were not included in the impact comparisons (the authors speculated that they were midfoot strikers). Here are the results the individuals (forces are measured in units of body weight):

When you look at these results at the level of the individual, it becomes clear that responses are somewhat variable. In particular, if you look at the results for impact force peak in subjects 4 and 5, they exhibit completely opposite responses to the two shoes. Subject 4 impacts considerable harder in the hard shoe, but subject 5 impacts considerably harder in the soft shoe. So, although the mean impact response between the two shoes was not significantly different, suggesting that midsole hardness need not be a consideration when it comes to managing impact force, for these two individuals it matters a great deal. What’s more, if we assume that lessening impact force is a good thing (this point is debatable as impact can stimulate bone growth, and we have no idea what threshold limits for impact might be problematic for any given individual), these two runners would require completely different types of shoes! Going even further along this line of reasoning, if our goal was to provide a shoe for these runners to reduce impact, the conventional wisdom is that more cushioning is the way to go – but, that would be the wrong answer for 50% of the runners examined here who had higher impact peaks in the softer shoes. This is what gets lost when looking at mean responses – they don’t tell you what is best on an individual level.

The point I’m trying to really emphasize here is that runners are variable, and we each have different needs on an individual level. This is why I have such a problem with the traditional approach to running shoe design. Why in the world should we expect that every individual will do best in a shoe with a 10-12mm heel-forefoot offset??? Until recently, this is the only type of shoe that has been available to most runners (and don’t say flats have always been around – they have, but generally in specialty stores and were typically not recommended for long distances and only for “efficient” runners). As recently as January of this year, I went into my local Dick’s Sporting Goods and counted 90+ running shoes on the wall – all of them – every single one – had a traditional offset. No a single racing flat or more minimalist shoe was to be found. That has changed in the past six months, but we are still a long way from really understanding how best to assign the best shoe to an individual runner. Same goes for assigning shoes based on arch height, pronation, etc. We have no strong evidence that this approach works, and in fact there is evidence that assigning shoes based on foot type is no better than assigning a stability shoe to everybody. This doesn’t mean that the approach doesn’t work for some individuals, just perhaps that it shouldn’t form the primary basis upon which we assign shoes.

We need a lot more research on how to do a better job at all of this – how to tinker with form when needed or to leave things alone, how to determine who needs lots of cushion and who doesn’t, who needs a more stable platform and who doesn’t, who’s better off ditching shoes altogether? It’s a difficult task to be sure, and right now the best approach I can suggest is a willingness to self-experiment. I do believe form and shoes play a big role in healthy running, and I don’t think that runners need fear trying different types of shoes if they do it carefully. My hope is that as more people tell their individual stories, and as more research comes to light, better advice will come with time.

You just finished reading On Human Variability, Running Shoes, and Running Form: The Importance of an Individualized Approach! Consider leaving a comment!