Home / Blog Posts / On Running Form II: Landing Under the Center of Gravity

On Running Form II: Landing Under the Center of Gravity

Last week fellow running scientist/blogger Steve Magness put up a long, thorough post explaining his thoughts about “How to Run.” One of the things I found interesting about his post was his discussion of the use of “cues” to help one improve running form. Often, as Magness admits, the cues are an exaggeration of what happens in reality, the purpose there being to get a runner to change form in the direction wanted by thinking in terms of a cue that overshoots the actual goal. As an example, here’s what Magness has to say about cues used with the goal of getting a runner to shorten their stride (to avoid overstriding – more on this below) and adopt a more midfoot/forefoot footstrike:

“Sometimes when giving cues it helps to overemphasize the point, such as telling a runner to feel like they are putting their feet down behind them when correcting foot strike. Since “normal” is incorrect, such as reaching out and heel striking in this example, sometimes over-correcting is necessary initially.”

As indicated, the basic goal of the above cue is to help a runner to avoid overstriding (see picture below), which is when a runner reaches out ahead of the body with the lead foot and (typically) heel strikes with an extended leg (I should emphasize that overstriding and heel striking are not necessarily always linked). Overstriding is linked to the generation of braking forces and deceleration of the body upon footstrike, reducing efficiency and potentially increasing risk of injury due to impact shock transmitting up the leg. While there is debate about a lot of aspects of running form, avoidance of overstriding is one thing that most people seem to agree about (though some have questioned if we even have an accurate definition of overstriding). Returning to Steve’s cue, the reality is that the runner will never “put the foot down behind them,” but consciously thinking about this cue can help the runner to land closer to their center of mass and avoid the dreaded overstride.

Example of a runner who is overstriding – note the straight leg and pronounced heel strike far out in front of the body. From Asics America website.

The reason I started this post by talking about cues and overstriding is because one of the pieces of advice I see most frequently in descriptions of proper or optimal running form is to land with the lead foot directly under the center of mass of the body. If you’re not familiar with the “center of gravity” (COG) concept, it simply refers to the average location of the mass or weight of an object. If you were to try to balance a pencil perpendicularly across your finger, the location where you could balance it evenly would be the center of gravity. In a human standing vertically, the center of gravity is located somewhere along the midline of the body extending from the head through the hips (closer to the hips). If you were to lean forward, the center of gravity would move forward as well. Thus, in a runner with a vertically oriented torso (like Robert Cheruiyot or Meb Keflezighi in the images below), the goal would be to have the foot land directly under the hips (with a slight bend at the knee) so that the weight of the body as it impacts the ground can be absorbed by the springiness of the leg, and braking forces can be minimized. In a runner with a forward lean, the foot would land just a bit further forward.

I have long been doubtful that landing directly under the center of gravity is possible. Indeed, exercise scientists Ross Tucker and Jonathan Dugas from the Science of Sport blog state the following in one of their posts on running form:

“It’s probably impossible to run with a landing directly beneath your centre of mass. That would require you to be leaning so far forward, you’d probably be able to to touch the ground with your hand! So the limit to balance also limits the ability to get that landing directly underneath the hips (or wherever the centre of mass is). Also, if you chop your stride too much, then you start to compromise on the benefit of having longer legs – you effectively shorten your ‘reach’.“

In my previous post I used still images captured from high speed footage (300 fps) of the top runners on the 2010 Boston Marathon to address variability in running form (see below). In looking at those pictures, I was struck by the fact that none of the four runners were striking directly underneath the center of gravity (roughly under the hips) at the moment of initial contact of the foot with the ground. 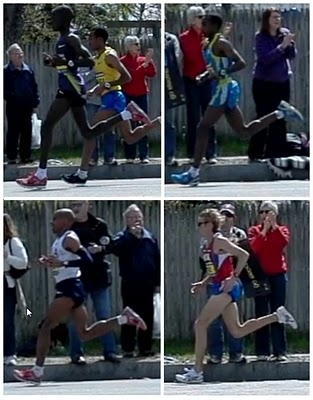 In an attempt to look at this further, I pulled four additional images synchronized to the moment where the entire sole of the foot comes into ground contact. On these images I drew a line from the center of the ankle joint through the knee joint, and then extended the line vertically through space to see where it fell relative to the center of gravity (see below). In all four runners, it is clear that full foot plant occurs well in front of the torso and hips, and thus none of these elite runners are landing with the lead foot directly under the center of gravity. Thus, they all seem to be breaking a seeming “cardinal rule” of proper running form – or are they? Perhaps the reality is that they are doing what we should all do, which is to land slightly in front of the center of gravity, with the lower leg oriented approximately vertically, and a slight bend at the knee (Kebede does appear to have a bit more of an extended knee compared to the others in both the pictures above and below – he finished second in the 2010 Boston Marathon, not too shabby!).

Maybe I’m splitting hairs here, but I like precision and clarity when I try to envision biomechanical principles, and the idea that we can actually run with a foot landing directly under the center of gravity seems more myth than reality to me. I’d love it if someone could prove me wrong by showing me a slow motion video of a runner actually landing directly under the COG (still images in the absence of video and grainy YouTube clips don’t count – I agree with Tucker and Dugas from the Science of Sport when they so frequently say that high speed video is the way to go when it comes to analyzing running form – I’ve seen too many images purporting to show this that clearly are taken well after footstrike), and I’m more than willing to admit when I’ve made a mistake (I tell my students this all the time).

In the end, what I take from this is that the advice to land “directly under” the center of gravity is better stated as “as close to under the center of gravity as possible.” In this sense, this rule of running form is better viewed as a cue as advocated by Steve Magness to help a runner to shorten stride and avoid overstriding than it is a description of what your body is actually doing. The problem here is that I have seen stick figure drawings depicting runners leaning way forward and landing with the foot under the COG. I’ve also seen still photos purporting to show runners landing under the center of mass that clearly seem to be captured well after the moment of foot contact with the ground. Maybe I’m wrong, but this looks totally unnatural to me, and I tend to agree with Tucker and Dugas on this one.

You just finished reading On Running Form II: Landing Under the Center of Gravity! Consider leaving a comment!