Shoe wear patterns fascinate me. At the end of each run, I have the habit of taking my shoes off and scrutinizing my sole wear patterns to see if anything interesting pops up. I may look a bit odd walking down my street barefoot while staring at the soles of my shoes, but at this point I think my neighbors know me well enough to not question my sanity. 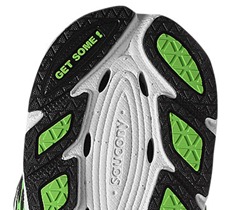 I used to absolutely destroy the heels of my running shoes. In fact, I once burst the air pocket in the sole of a pair of Nike’s by grinding down the heel so badly. Those days seem to be long gone. Since going minimal and working on my stride, outsole wear on my shoes has decreased dramatically. I do still get some wear on the heels, but after 70+ miles of running in the Saucony Grid Type A5 flat, for example, I can still clearly read the “GET SOME!” mantra found under the lateral heel (see stock photo above and to the left) – and it’s still completely green. In the old days I would have done some serious damage to that region by now.

This brings me to an issue that I hear about a lot – excessive shoe wear and “poor durability.” The reality is that when people have excessive wear on a shoe, it is more likely that the issue is with their running form rather than the shoe construction (unless the shoe construction is causing them to run in an inefficient way, which is entirely possible).

Shoe outsole wear is the result of friction between the sole and the ground, not impact (the latter has a bigger effect on midsole compression). People often tend to think that wear patterns are an indicator of foot strike type, and they can be, but not all wear occurs at initial contact. For example, wear under the big toe typically occurs at toe-off, probably due to twisting of the foot relative to the ground.

I have videos of people whose feet glide into ground contact like an airplane approaching a runway. They skid forward on their heel before the forefoot comes down, just as the back wheels of an airplane make contact prior to the front. This is what destroys heels, and is why I still wear down the heels on shoes when I walk in them – I tend to be a scuffer when I walk. I also suspect that some forefoot strikers reach out and skid with the forefoot, causing excessive wear on the lateral forefoot (aka Kinvara-Killer Syndrome).

When you run, excessive friction can be a sign of inefficiency since it isn’t helping you move forward, particularly if you are plowing forward into the ground. Rather than landing like an airplane, picture your foot contacting like a helicopter touching down. When you watch experienced barefoot runners in slow motion, it’s as if their foot pauses for a moment in the air prior to touching down gently (see video below). Why? Because if they plowed forward they’d tear the skin off of their feet. I’m convinced that a big part of why barefoot running is different is not just that it requires you to absorb impact differently, but that it also requires you to minimize friction to protect the plantar skin. Putting on any kind of shoe alleviates the need for the latter, which is why I think even the most minimal shoe is not a perfect mimic of barefoot running.

So, if you have a tendency to destroy shoe soles rapidly, whether on the heel or forefoot, I’d encourage you to take a video of your gait and see if you’re a scuffer. It might explain your shoe-durability issues. I know of people who can get a thousand miles on a pair of shoes, when the same pair on another person might last a few hundred. In a case like this it’s probably due to a combination of surfaces run on and/or their form.

So how do you correct scuffing? Tough question, but I suspect it’s in many/most cases a symptom of overstriding. When you reach out too far in front of the body with the foot the chances of scuffing are greater than if you touch down gently like a barefoot runner. Think about propelling a scooter – you want the foot to contact the ground quickly and pull backward, not plow forward first then pull. The latter would destroy your shoes really fast! This explanation would apply to both heel and forefoot strikers, the location of max wear is what would differ. To correct this, avoiding reaching out would be the key. Mental cues like “vertical shin on contact” or “put the foot down behind you” can be helpful, as can a video of yourself that may give you an idea of what you actually are doing when you run.

I’m tempted to do a study on this – scan shoe wear patterns and correlate with form videos. Add it to the queue!

Curious, for those who have worked on form change and/or moved to minimal shoes, have you found that your wear patterns have changed? Have you increased the mileage you get out of your shoes? Leave a comment!