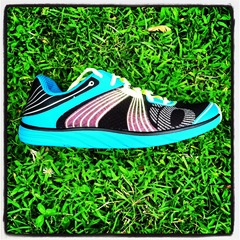 Before this summer I had never worn a Pearl Izumi running shoe. I’m familiar with the brand from their high-end technical clothing, but had thought of them more as a cycling brand that had only taken tentative steps into the running market. That being said, I had heard rumblings about a new line of shoes they were working on, and when Timothy Olson won Western States in one of their in-production trail shoes the internet chatter about the brand really picked up.

A few months ago a rep from Pearl Izumi contacted me to see if I’d like to try out one of the shoes in their new E-Motion line. They wound up sending two pairs – the EM Road N1 for me, and the EM Trail N1 for Nate. We’ve now had time to get some miles on the shoes and are ready to render our verdicts (Nate’s review should come along soon).

The sole is really the story for the Pearl Izumi EM Road N1. All of the shoes in the Pearl Izumi E-Motion line feature something they are referring to as dynamic offset. As described in the video below, PI talks about how offset changes as the foot rolls through during the running stride (they use a heel striking gait as the default):

Looking at the stack height numbers for the EM Road N1 this concept as shown in the video initially didn’t make much sense to me. Running Warehouse reports stack heights of 22mm in the heel, 15mm in the forefoot. Measuring with my calipers I get about the same when the insole is removed. Pearl Izumi lists the EM Road N1 as only 1mm offset – my guess is that they are including the insole, and also taking into account dynamic offset during the stride. I wish I had measured the insole before putting miles on the shoe since insoles tend to compress quickly in certain areas, but I found that the insole thickness changes along it’s length:

I’m wondering if the insole design is partly the reason that this doesn’t feel like a 7mm drop shoe? The thicker part of the insole under the midfoot doesn’t so much feel like arch support as it does just a thickening in that region. The sensation is somewhat like the Skechers GoRun 2, which also has a smooth ride (but is a much softer shoe).

In the video Pearl Izumi talks about how they moved the beginning of the toe spring angle back by about 20mm, and this seems to create a slight rocker like feel to the sole of the shoe (probably assisted by the thickening of the insole under the midfoot). If you land on your heel (I’m a very mild heel striker to midfoot striker in most cushioned shoes), you also compress the heel a bit and then roll forward, so static drop measurements may not reveal what actually happens if the heel is more loaded than the forefoot. The net effect of all of this is that the shoe delivers on Pearl Izumi’s promise of an incredibly smooth ride, though it took me a few runs to really feel it. To me it runs a lot like a 4mm drop or lower shoe.

The first time I ran in the EM Road N1 my sense was that I wasn’t going to like it. It felt really firm, almost harsh underfoot. But with each subsequent run the shoe started to grow on me. It’s gotten to the point where I really want to pull this shoe out for each run that I go on. I’ve put about 50 miles on them so far, and it’s definitely one of those shoes that would have gotten a very different review had I not given it more than just a few runs. I don’t know if the shoe has broken in a bit (perhaps the insole has?), or if I’ve just adjusted my stride to running in it, but smooth is really the word that best describes the ride. I’m very impressed.

As always, I’m limited in my ability to comment on durability given that I typically review shoes after 30-50 miles (it’s tradeoff to reviewing a lot of shoes myself – can’t get a ton of miles on each). You can see abrasion from the lateral heel to the midfoot on my pair (I probably land variably along this region), and under the center of the forefoot. There is a lot of exposed midsole on this shoe so if you tend to wear down exposed EVA quickly that might be a concern. Comments on durability are welcome from those with more miles on these shoes! 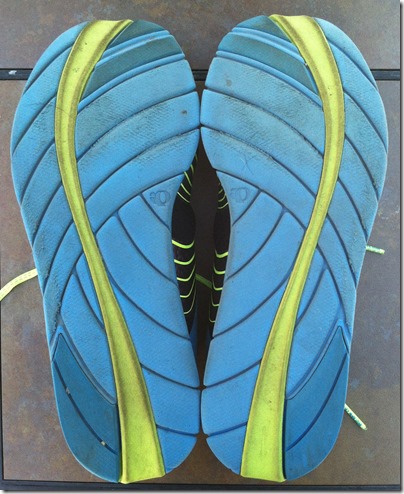 The upper of the EM Road N1 is fantastic. The forefoot is composed of a woven mesh that has some give to it – I can stretch it when I push my big toe up or out, which is something I always like in a shoe. Internally there is a liner that is super soft against the skin – very comfortable! The ankle cuff is well-padded and is lined by a smooth, soft material. The seam between the ankle cuff and forefoot is taped to reduce friction, though it seems to be peeling up a bit on the forefoot side. I like the concept, but a better adhesive mechanism is needed. Don’t think I’ve run in them sockless, but see no reason why I couldn’t.

The upper has minimal structural components – stability is provided solely by thin welded overlays, and the heel counter is much reduced compared to more traditional shoes – it extends maybe only an inch or so above the sole.

The fit is perfect on my average width foot. It hugs well through the heel and midfoot, and the forefoot, though not super wide, is plenty accommodating for my foot. The stretchy upper material in the forefoot definitely helps. I find these to be incredibly comfortable shoes.

As I’ve mentioned a few times, this Pearl Izumi EM Road N1 is an incredibly smooth ride, but it may take a bit of breaking in to get a feel for it. I’m not sure how long my longest run has been in them, but I’d not hesitate to consider them for distances as long as a marathon. I’ve used them for a variety of workouts (easy runs to hill repeats) and on both asphalt and dirt roads (no trails). Performance has been good in all situations. They are a reasonably firm shoe, so responsiveness is also good enough for racing. If’ you’re in the market for a shoe that feels just a bit different than your typical trainer and offers an incredibly smooth, comfortable ride, the Pearl Izumi EM Road N1 is definitely worth a look.

The Pearl Izumi EM Road N1 is available for purchase at Running Warehouse and at Zappos.