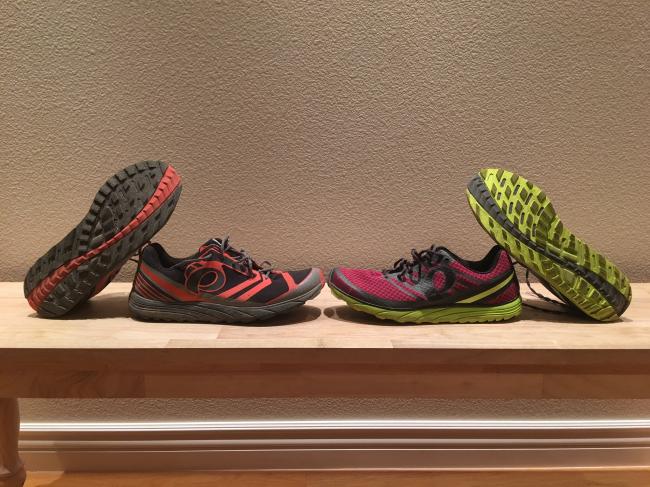 The Pearl Izumi trail lineup has quite the dedicated following. I’d guess, without know exact numbers, that when the first versions launched in 2013, they significantly boosted Pearl Izumi’s sales judging by how many I see at ultra races. The shoes weren’t updated till this July, a two and a half year span, which is unusual in the shoe industry these days.

I ran in the original Trail N1 a few years ago, doing a 50k in them, and even used them during my first 100 miler at Bighorn in 2014. While I appreciated some aspects of the shoe, they didn’t capture me like they did many other trail runners. I found the midsole a bit unresponsive, and didn’t love the rocker and midfoot thickness, especially on more technical trail. I’ve since received and run in both the N2v2 (I never ran in the N2v1) and N1v2, and have come away with some new thoughts. Disclosure: Both shoes were provided free of charge by Pearl Izumi for review.

Specs via Running Warehouse for N1v2 and N2v2.

Arguably the biggest asset of the Pearl Izumi trail line are their fantastic, seamless uppers. They are super comfortable, hold the foot well, and breathe/drain well too. Pearl Izumi made some improvements in the overlay placement by including an overlay that runs along the entire length of the shoe where the upper meets the midsole, acting as a mini-rand that helps prevent it from blowing out. The N2v2 has more significant and wider overlays, which I like, and I feel it holds the foot better than the N1v2. It also fits just a bit wider due to the wider midsole design, even though they are both on the same last. Additionally of note is that the N1v2 has a significantly softer heel counter than the relatively firm one in the first version, a change I like. Not much else to say on the uppers; they’re fantastic. I’m pretty fond of them, and the N2v2 especially holds the foot well with tons of comfort for long miles. 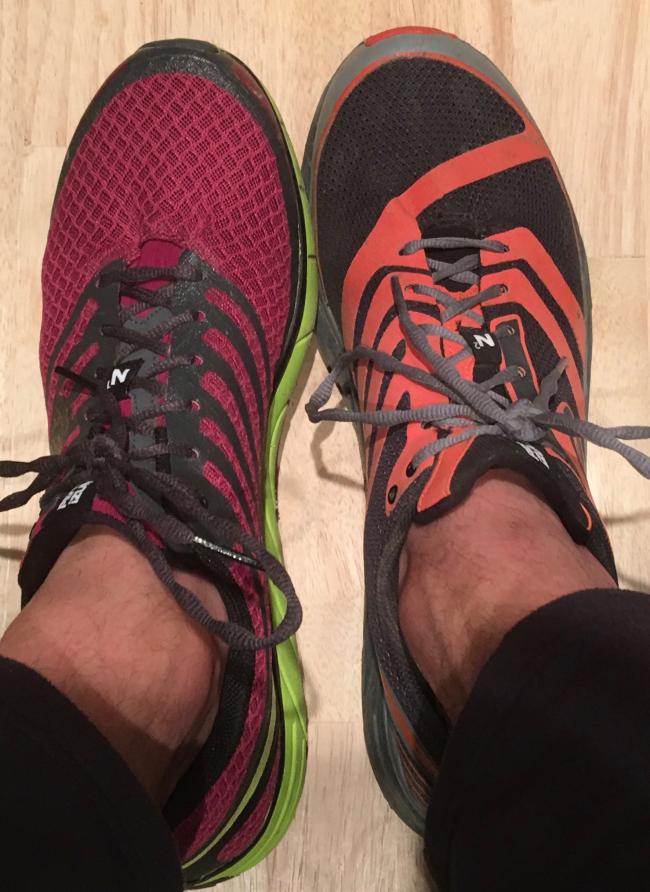 I like the N2v2 upper better. It has thicker, more durable mesh; thicker and wider overlays that hold the foot better and a slightly wider forefoot. Very comfortable uppers on both of them.

Here is where I might get into some hot water with PI fans out there, but I’m not enamored by the ride of the shoes, particularly the N1. I can see more appeal, and actually enjoyed the N2v2 much more than the N1v2 despite expecting the opposite given my usual preference for lighter, faster shoes. Part of the reason for this is that, while the N1 is a little lower to the ground, it’s not that much lower than the N2 and feels very similar in the forefoot, yet weight is very close to the same.

The soles of both shoes are similarly rockered in the midfoot, and given the N1’s lower heel height I actually feel that it’s a bit harder to roll through the rocker than the N2, which has 3mm more heel height (note: I choose to use Running Warehouse’s specs because I feel they are more accurate to how the shoes feel than the Dynamic Offset figures Pearl Izumi claims).

The N2 also has a wider outsole and midsole, which contribute to a bit softer ride and a little less stiffness compared to the N1. For me this really makes the N1 redundant, since it isn’t flexible or light enough to be a nimble racing shoe. Instead, the N1 comes across as riding a bit more firm, but with the same stiff rocker and less roll because of the lower heel height. They both have rock plates and nearly equivalent forefoot protection.

I hands down prefer the ride of the N2v2, and can actually see using them late in long races when I want the rocker because my feet are tired and my stride is really shortened. On normal training runs though, I feel the shoes don’t really grab me in any area in the ride department. They aren’t horrible, but don’t stand out either. 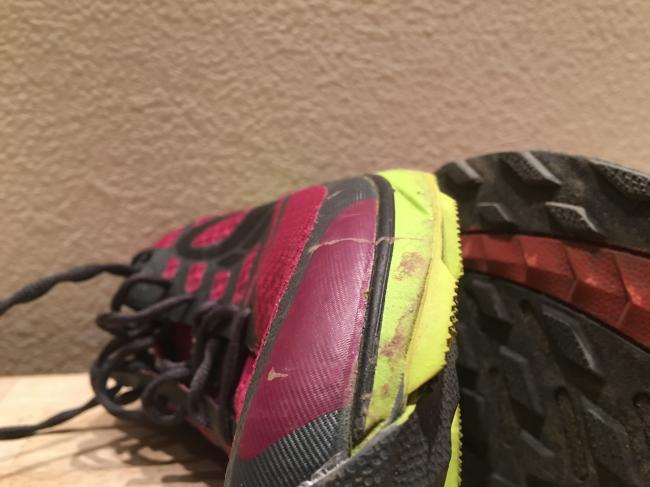 N1v2 midsole cuts straight down, which I like better, especially for technical terrain. Problem is the rest of the shoe, with the thick midfoot and rockered design doesn’t work as well on technical trail. 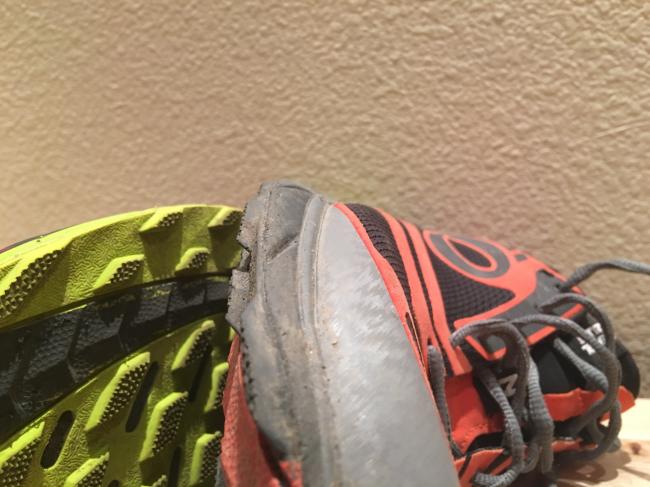 N2v2 midsole flairs out. This creates a slightly wider fit in the upper and a softer feel on the ride. 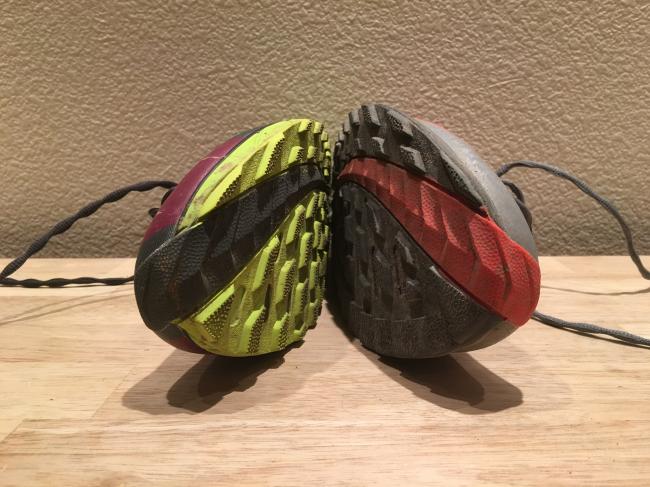 Both the N2v2 and N1v2 share the same outsole as their respective first versions, with the exception of a rubber compound change that is supposed to offer more grip. I never really tested the N1v1 in very technical terrain, so I can’t recall the grip on it, but the N2v2 and N1v2 both seem to hit right in the middle of the road for grip for me, which is just fine considering where I’d use them (i.e. non-technical drier trail). I like the outsole design overall, and again prefer the N2v2 over the N1v2 mainly because it has a full coverage design that not only will hold up a bit better, but I think also helps the roll with the rockered midsole geometry. The N1 has some cutouts in the midfoot that, especially after some miles are put on, results in some loss of structure there. I don’t think this is a good thing for the N1 since the sole still has the rockered design and it compromises the function of the rocker. Overall, nice, middle of the road design with lugs that add traction but aren’t too deep to take away from the ride on smooth terrain. 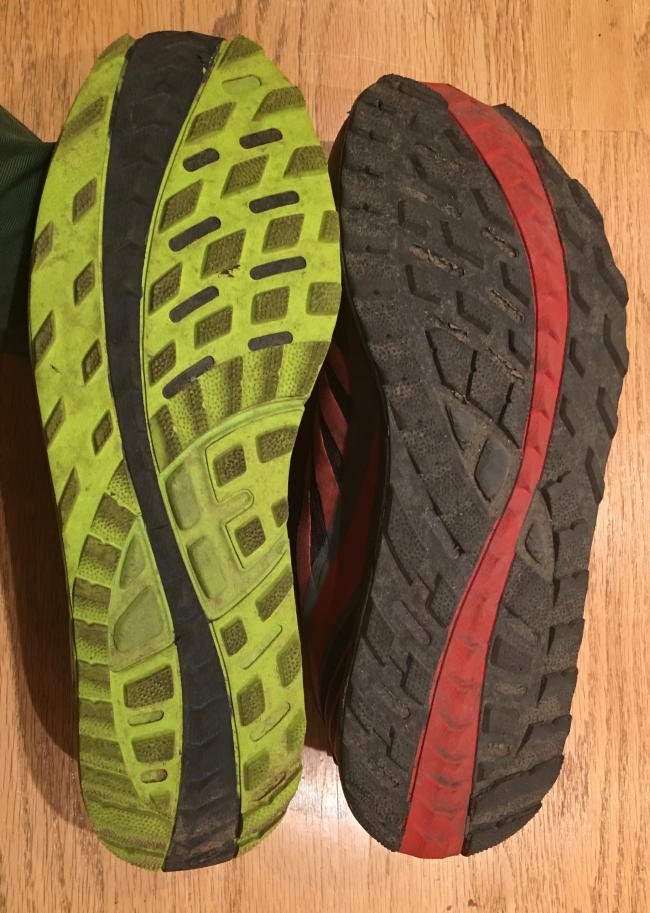 Having not run in the N2v1, I always thought they had the same outsole. Not so! The N2v2 is wider and has an extra lined lug design on the medial forefoot and also doesn’t have the cutouts or as much exposed foam in the midfoot. The lug depth is the same.

I think the N2v2 is nearly spot on for what they are trying to achieve with lightweight but full-featured protection and a smoothed out, rockered ride. If they could just use a more responsive midsole material than their 1:1 Energy Foam on the same shoe, it’d be hard to beat for smoother, long races. I, surprisingly, prefer the N2 over the N1 and feel that it provides a much better representation of what Pearl Izumi is trying to achieve with the E:motion line. The uppers are some of the best on the market, and the overall package of the N2v2 is hard to argue against. It is probably the one of the best overall packages in a 10 oz shoe out there. That being said, I happen to like a few 11 oz shoes better for the same purpose, namely the adidas Response Trail Boost and adidas Raven 3, which are more responsive and better on technical terrain while still running very well on smooth trail as well.
the N2v2 compares most closely with the Nike Zoom Wildhorse 3 (nearly same weight, stack and drop) and, although I like the upper and last a bit better on the Wildhorse 3, I think the ride and overall package of the N2v2 is hands down better than the WH3.

The N1v2, however, I think needs to be differentiated more from the N2v2 to avoid being redundant in the PI trail lineup. It just weighs and feels too close to the N2 without really bringing something different to the table, and I would recommend the N2v2 over the N1v2 unless the 3mm difference in drop was a massive issue to someone; the ride is just much better on the N2.

The N1 needs to ditch the rocker design, or at the very least, narrow the midfoot up a ton so that there is more independent movement of the forefoot and heel, which helps stability and precision on more uneven terrain (but reduces rocker integrity, which is why I think the rocker needs to go). Second, I’d make a much lower profile outsole to lighten the shoe up a bit – get it lower to the ground and give it a racier feel. Lastly, I’d figure out how to get the weight down under 9 oz. Without those three items being addressed, it is simply too much of a duplicate of the N2v2 (similar forefoot stack/protection, same lug depth, nearly same upper), but less effective at what the E:motion concept is trying to achieve.

I’ve heard of an update to the PI trail lineup for July 2016 that includes new outsole designs, but don’t know much else at this point. I’m hoping they can differentiate the two shoes a bit more, and with a forthcoming Trail N3 (which I’m hoping to review) in March, they don’t need to beef the shoes up. Rather, they need a lighter option than the N2v2 that offers a more precise and nimble ride.