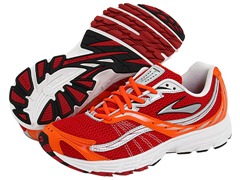 We runners can sometimes develop special bonds with certain pairs of shoes. They might be a shoe we set a PR in, or the shoe we wore in our first Boston Marathon. These are shoes that we hang on to and keep in our closets because they retain special meaning, and the thought of dumping them in the trash is simply too much to bear. I have a few of these shoes myself – among them I would include the Saucony Kinvaras that I wore on the day I qualified for Boston, the Nike Free 3.0 v1 that were my first “minimalist” running shoe, and the Brooks Launch.

The Brooks Launch was a shoe that I wore concurrently with those original Nike Frees back in 2009-2010. they were a favorite among the circle of running friends that I had met on dailymile.com, and I had a breakthrough marathon at Disney in January 2010 with the Launch on my feet – it was the first marathon in which I managed to avoid the dreaded “wall.”

Thus, I felt a twinge of sadness when I learned that the Launch, along with the Brooks Green Silence, is set to be discontinued in early 2013. I’d read reports of its impending demise on the Runner’s World shoe forum, and then had it confirmed by a reader who contacted Brooks customer service and reported the following (thanks Brad!):

“I have spent a bunch of time on instant chat with Brooks customer support the last few days to confirm that the Launch is going to be discontinued in January of 2013. When I pressed them as to the reason why this great shoe is being killed off, they basically told me that even though there are a “passionate group” of Launch fans (myself included), the sales volume for the Launch does not warrant continuing the manufacturing production of this shoe. They also are killing off the Green Silence for the same reason in Jan of 2013.

I have been told multiple times by Brooks that the Pure Flow is the “replacement” for the Launch, but unfortunately these 2 shoes are very different in fit, design, features, feel, and performance.

I am a bit surprised that Brooks came out with this latest new color scheme for the launch (the orange and yellow); considering they were already planning to kill the model.  So it appears that Brooks is leaving no options for “middle of the road” lightweight and more minimal in design neutral trainers like the Launch, with their only options being the low heel toe drop Pure line or their more built up and heavier “traditional trainer” models.  Their customer service rep confirmed this gap in their product offering and told me to stay tuned for future updates to the Pure line that MIGHT be a closer approximation to the venerable Launch model.”

Now, the Launch is not a shoe I run in these days, nor is the Green Silence, but both hold a place in my running history, and the Launch in particular was a fine shoe. It filled that niche between traditional trainer and lightweight racer, and it served me well during it’s time on my feet. I’d been surprised that neither the Launch nor the Green Silence received any kind of update in the past two years (aside from new color options) – this is fairly unusual in this day and age. Perhaps it was an early warning sign of their impending demise. I still know a lot of runners who use and think highly of both of these shoes, but in a market where running shoe “success” probably hinges more on mall and “big box” sporting goods store sales than sales to actual runners, profit was not sufficient for Brooks to maintain these shoes in its line. As a runner, this is perhaps what saddens me the most.

Personally, I would have loved to have seen Brooks drop the Launch to an 8mm offset, thus shaving off a bit more weight, and position it as a lighter competitor to a shoe like the recently released, and newly 8mm drop, Saucony Ride 5.

Anyway, if you’re a fan of either the Brooks Launch or Green Silence, looks like it may be time to stock up before they are gone. Or, perhaps we need to start a “save the Launch!” campaign. What do you think?