When it comes to races, marathons are truly a different beast than any other distance I have run, both mentally and physically. We spend months training and obsessing about marathon strategy, but unfortunately sometimes things don’t go our way on race day, which can lead to disappointment. Yesterday I ran the 2009 ING Hartford Marathon with the lofty goal of qualifying for the 2010 Boston Marathon (I needed a 3:15:59 or less), and with the preceding introduction it’s probably not hard to guess that things didn’t go the way I wanted. The purpose of this post, however, is not to wallow in sorrow about a goal unmet, but rather to make it clear that despite my disappointment, the day was a great one and only strengthened my love for this crazy sport that I’ve become obsessed with.

First a bit of background to give you an idea of where my mindset was going in. Prior to yesterday I had run a total of two marathons, both in Vermont (the Vermont City Marathon), with finishing times of 3:43:38 (2008 – report here) and 3:36:12 (2009 – report here). After a summer of more intensive training and mileage than in any previous marathon cycle, and with performances in shorter races that would support my ability to reach my goal (1:29:47 half-marathon PR last November at Manchester City, sub-19:00 5K as recently as August), I was hopeful that a 3:15 would be in play (I’d even run up to 20 miles at under BQ pace just over a month ago). On the down side, I had suffered from a respiratory issue (bronchitis/laryngitis/bad cough) for most of the previous week and a half, and my taper was far more extreme than I would have liked. However, despite the setback, I was confident that I had fully recovered heading into the race. 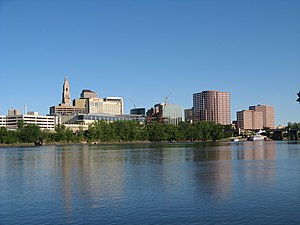 Running the Hartford Marathon was very much a homecoming for me. I grew up right outside of the city, my parents still live there (I’m staying with them in my childhood home for the weekend), and I still have strong personal ties to the area. It is for that reason, along with ideal timing (the race coincided with my Fall break), that I picked this particular marathon to run this Fall.

On race morning my Dad drove me downtown to Bushnell Park where the start/finish line was, and he dropped me off with plans of coming back later with the rest of my family (Wife + Kids, Mom, and Sister) to watch me as I crossed the finish line. I spent some time doing my usual pre-race routine of waiting in port-a-potty lines so that I wouldn’t need a pit-stop during the race (which I didn’t), and after heading to the starting line, managed to get a spot not too far back in the pack so that I could avoid the jostling crowd at the start.

The start of the race was fairly uneventful – I settled into a comfortable pace without going out too fast, and felt really good at the outset. One problem which popped up immediately was the fact that the buildings of downtown Hartford messed up my Garmin’s GPS signal, and my average pace recording was way off track as a result – you can see from the mile-split chart below that it recoded my first mile as sub-7:00, and my second mile as sub-6:00.  While I would love to claim that those were my actual paces, I can assure you that they were not (my Garmin recorded the full race distance as 26.66 as a result of the initial problems). 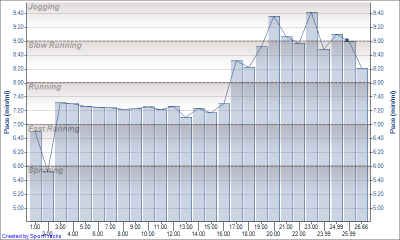 The above mile-split chart also shows that the first 16 miles were remarkably consistent and at sub-BQ pace.  This can be attributed largely to the fact that I joined in with the 3:15 pace group right around the end of mile 2.  There were probably about 20 of us in the group, and I hung on with them right through about mile 16.  My thoughts now about running with the pace group are mixed – the 3:15 pace leader was experienced and helpful, but I wound up running a slower pace than I had initially intended.  It wouldn’t have mattered with the crash that ultimately came, but I think in the future I’ll opt to run solo and stick to my own plan.  The combo of the Garmin freaking out and running a pace dictated by someone else threw me off my game a bit, but certainly had nothing to do with my ultimate and inevitable crash.  On a side note, turns out the 3:15 pace leader finished in 3:21 (probably a lot of reasons why that could have happened), and most of the people who hit the halfway point with me seem to not have made the 3:15 target either (from the newspaper stories this morning, it seems that a lot of people had a tough day out there).

What I find remarkable about the marathon is just how quickly things can go bad.  I felt great through the halfway point, recording a time of 1:37:27 – right on pace for a 3:15 – and was still cruising through mile 16.  The crash came extremely quick, and once it hit, I knew the day was over for me.  As you can see from the splits, I smacked straight into the wall at mile 17, and never again saw a split below 8:00/mile.  I had taken about 2 gels and over 20oz of gatorade by that point, but it didn’t help – I was done.  I faced a tough decision as I saw the pace group head off into the distance – struggle through and try to salvage a strong PR, or switch to run-walk mode and try to lessen the damage to my legs and hasten recovery for another attempt in Manchester, NH in November.  I swallowed my pride and opted to switch to Galloway mode, and it didn’t take long to realize I had made the right choice.  I had absolutely nothing left in my legs – they were deader than they’ve been in either of my previous marathons, and if I’d tried to struggle through I’m not sure if I could have finished.  I had some minor GI discomfort/nausea from time to time, but my legs were really the source of my demise – they just didn’t want to move.

So, for the final 9 miles of the Hartford Marathon, I alternated about 2-3 minutes of running with 30 seconds to 1 minute of walking.  I was actually surprised by the number of others I saw doing the same – way more than I had seen in my two marathons in Vermont.  I leapfrogged a couple of other runners repeatedly, several of whom were also casualties of the 3:15 pace group.  I had some nice conversations with a few of my fellow strugglers, including a younger guy who was in the same boat as me.  We talked for awhile about how hard and unpredictable marathons are, and how shorter race performances don’t say a whole lot about where you’ll finish in the marathon (he was a recent 1:26 half marathoner).  We commiserated about the fact that we wouldn’t be meeting our pre-set goals for the day, but reassured each other that finishing was the most important result, and that simply running race was the true challenge.  I think talking to him pulled me out of my hole a bit and I had my longest stretch of continuous running after the crash while we talked.  Meeting like-minded people is one of the great things about running a marathon, and the support we can provide to one another is truly amazing.  He eventually slowed down for another walk break while I trudged on, and I never wound up seeing him again – I hope he still got his PR.

Most of the final few miles are still a blur to me – I’ve never struggled like that on a run to the same extent.  The positive part of the run-walk method was that my running spurts were still in the 8:00 range, which allowed me to keep most of my splits around 9:00 (give or take).  As I approached the final 2 miles, I quickly realized that even sub-1:30 was out, but knew that a PR was still a possibility if I could keep my splits below 9:00.  I buckled down, chose landmark targets in the distance to keep me running as long as possible between walk breaks, and managed to keep moving forward.  As I approached Bushnell Park and the finish-line, the highlight of the marathon occurred.  I knew roughly where my family would be, and as I approached the final turn that would take me under the Soldiers and Sailors Arch and the finish-line, I saw them all standing on the side of the road (see video below).  Their cheers gave me the final burst I needed to finish strong, and I crossed the line at 3:32:35, for a new PR by about four minutes.

After walking down the finishing chute and picking up my medal, I staggered out into the park and began feeling dizzy and lightheaded.  With my family nowhere in sight and the baggage pickup on the other side of the park (where my cellphone was), I slumped against a tree hoping that I wouldn’t faint.  Having been in the situation before (not running related), I knew what to do and eventually regained my bearings.  I eventually found my sister, and she directed me to where everyone else was, and I laid down on my back to get the blood flowing back to my head.  It didn’t take long before I felt better, and getting some food in the system improved the situation dramatically.  I avoided serious cramping, and after about 30 minutes I was able to walk just fine and I headed over to the playground and carousel where my kids had headed off to play (dad lying on the ground is apparently not a very exciting thing to watch!).

I ended the day as I have at each of my previous marathons – by cheering in the runners who finished after me.  Simply being there to watch the 4:00-5:00 finishers was enough inspiration to get me to lift my head back up.  I had just finished a marathon, and regardless of whether or not I’d met my initial goal, that was something to be proud of.  Now, a day later, I have no regrets from the experience.  My disappointment in not coming close to a BQ is tempered by the fact that I manged a 4-minute PR despite run-walking for 9 miles.  My love of running still stands strong, and despite the pain, I know that I will be back at the starting line of another 26.2 in the not too distant future – possibly as early as 4 weeks from now.  This habit of mine is truly a bit crazy, but I wouldn’t give it up for the world! 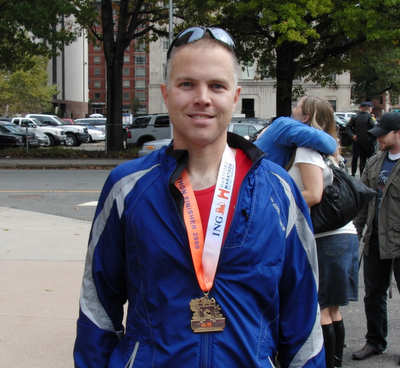 Me about 1 hour after finishing the Hartford Marathon.