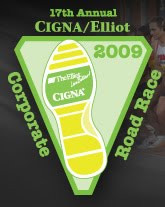 I generally enter races with both an A goal and a B goal. The A goal is the one that I try to keep to myself, my “dream” goal if you will. My B goal is the time that I think I can realistically beat and still be satisfied with the effort. Only on rare occasions do I meet my A goal – today was one of those days.

So far, I’ve only run a single, “unofficial” 5K this year (The Royal Family 5k in Florida back in March), and although I’ve been consistently putting in the miles (25-40/week), my speed-work has been limited to a few interval sessions earlier this summer and a 10-mile race in Belmont, NH last weekend. Thus, heading into the Cigna-Elliot Corporate 5K this evening I had very little idea what to expect time-wise. The Cigna-Elliot 5k is the largest annual road race in NH (~5000 runners), and it’s a race that I’ve run twice before, making it the only race that I have run in 3 consecutive years. Although it’s a big race, I enjoy the atmosphere, and the course is relatively flat, with the exception of a sharp uphill in the final 0.2 miles. I ran a 19:35 last year, so I was reasonably confident that I could break 20:00, but last summer I raced a ton of 5k’s and did almost weekly interval sessions at the track. Thus, my B goal for this race was sub-20:00. My 5k PR from last Fall is an 18:51, so I knew sub-19:00 was within the realm of possibility, but I didn’t really expect it to happen given the fact that I haven’t run many short races this year. Sub-19:00 was my A goal – the result that was doubtful but would make my week if it happened.

At this point, I could rehash the race itself, write about how much I love my racing shoes, write about effective pacing, or the details of the course. Although all of these contributed to my success in achieving my A-goal time, they really weren’t what made the day for me. I owe this race to the support and encouragement provided by two fellow runners – Bob and Jim. Bob is a colleague of mine who has been running a long time, but has had some Achille’s tendon problems that have sidelined him of late. He’s been a great source of running advice over the past 2+ years, and in a way he has kept me honest. He’s the one who told me to shoot for sub-19:00, and in fact predicted I would do it, and so far he’s been dead-on with almost every prediction he has made (he nailed my 1:29 Half-Marathon last Fall, which is my proudest racing moment to date). Having someone predict your time can be a great motivator, and I fully expect to get an “I told you” the next time I’m in the office.

The other person who was integral to today’s result is another friend who ran the race. Jim is another long-time runner with a ton more experience than me, and has been another great source of advice and encouragement. Our kids are of a similar age and get along great, and I ran into him prior to the race and lined up with him at the start. He’s also great about not letting me sell myself short, and we planned to meet up after the race to re-run the course and get in some additional miles. He was shooting for a sub-20 for the second consecutive race, which I’m happy to report that he achieved.

There’s not really all that much to say about the race itself. I ran well, felt comfortable, and kept my pace steadily between 6:00 and 6:10 for the majority. I knew about the final hill, and was able to plow up it with surprising speed (and pass a number of other runners), knowing that a sub-19:00 was in reach. I crossed the finishline with the official clock reading 19:01, but knowing that I was a bit back from the starting line at the beginning, I was confident that the chip-time would beat my A-goal. In the final analysis it did – Final Time = 18:57, 10/250 age group, 156/4949 overall.

After the race, I caught up with Jim and we ran the course a second time, and chatted mostly about running. Jim told me that he had a premonition earlier in the day that he’d run a 19:37, but crossed the line a bit over 19:40. When I checked the final results for chip-time, he hit his mark head-on – 19:37. Amazing! Running those extra 3+ miles felt great, and I was surprised how much my legs had left after the race – I owe that to marathon training I guess. It was also great to simply talk running with another passionate runner who was equally thrilled with his result, and sometimes that’s more important than meeting your own goals. I’ve found the running community to be an incredibly supportive bunch, whether it be my friends in NH or the on-line runners on Twitter and Dailymile. Without them, this sport wouldn’t be half as much fun as it is. 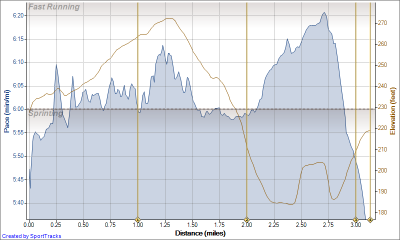