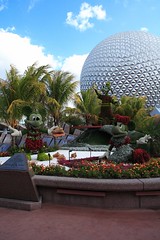 As I’ve mentioned in previous blog posts, it has been difficult to stick to my running schedule this winter. The combination of snow, ice, cold, and a busy work schedule have conspired to limit my ability to get outside, and just when I thought I was back on track with a 20+ mile week early in February, I got sick and put up a big zero the following week. I think that might have been the first week without a single run since I started this little habit of mine almost two years ago. Needless to say, I was depressed about how far I have fallen from where I was last fall, and it was with great wariness that I finally committed a few weeks ago to running a 5k race in Florida over my spring break. I rationalized that this race would let me know exactly where I was fitness-wise heading into my racing season, and would be the best possible kind of motivation for upping my mileage when I returned to the still-snowy north. Deep inside, however, I feared this race a much as any I have ever run. My last two 5k’s back in October were my best ever, both right around 19:00 efforts, and I knew that this wasn’t going to happen this time – my only question was how far off of this peak I would fall. I’m extremely competitive, with myself moreso than with others, and a sub-par performance would be a tough pill for me to swallow. 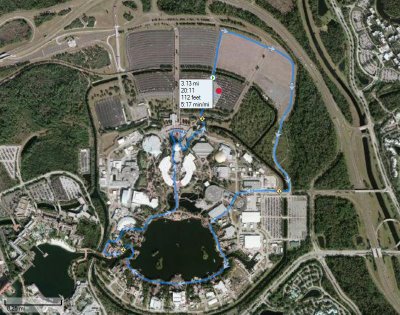 First, a little background. For as long as I can remember, I have vacationed with my family in Florida on an almost annual basis. Most of the time, we stay on the Disney World property in Orlando, and luckily my parents had the forethought to buy into the Disney Vacation Club at its inception, which means that we essentially have a timeshare that we can use each year for the next 30+ years. Since I now have two small kids, our annual trip is a source of great excitment and fun, and my wife and I are grateful to be joined by my parents and sister who are a source of immense help.

The race I would be running was the Royal Family 5k, which has a course that winds through the property of Epcot Center in Disney World. This was the inaugural running of the race, which was a prelude to the main event – the Disney’s Princess Half-Marathon, a new women-only endurance event that would be held the next morning (I found out later that guys are still allowed to run this half, but are not celebrated). I didn’t know when I signed up that this 5k was considered a fun-run with no offical timing or result postings, and I was a little disappointed at first. In retrospect, however, the only time that really mattered to me was the one on the clock at the finish-line – I would be running this one entirely for myself, so the lack of an official result was not a big deal. My initial thinking was that this would be an ideal race for me to use as a kick-off to the road racing season, since Orlando is a heck of a lot warmer than New Hampshire at this time of year. Last year, my first race was a 5k in Gilmanton, NH, and consisted of about a 1.5 mile leg straight downhill on a paved road, and a nearly equal distance straght back up a slush and ice covered dirt road. Needless to say, I could safely assume that ice and slush would not come into play at Epcot.

After arriving in Florida, I went on a 5-mile run in the warmth on our first full day, and realized just how hard it is to go from running in the minimal humiditiy of a New Hampshire winter to the already opressive humidity of spring in Florida. It felt like I was breathing under water, and my hopes for a good race were beginning to waver even more. Over the next seven days, I managed to rack up another 10+ miles running, as well as 15-20+ miles of walking through the parks. Although my wife continues to shake her head at my nerdiness, I actually wore my Garmin Forerunner GPS watch to the Magic Kingdom and Animal Kingdom. I’ve always wondered how much ground you cover in a day at a big theme park, and after carefully stopping and starting the watch before and after each ride, I calculated that I walked about 5 miles at the Magic Kingdom, and 3.5 at Animal Kingdom. Not bad, and that combined with being on your feet all day goes a long way to explaining why I’m as tired or tireder after a day a the park as I am after running a good long run. It also makes me feel not quite so bad about gorging myself on good food at least twice a day (my son has now learned of my fondness for carved roast beef!).

On Saturday morning, the last full day of our vacation, I arose at 5:30, had a Muscle Milk (if you haven’t tried it, this is an incredibly tasty protein shake and comes in a bunch of flavors), and hopped in the rented minivan with my Dad. I much appreciate his willingness to get up that early to help feed my need to race, and it was even nicer to have my Dad sitting in the bleachers at the finish line to watch me run. Even at my age and for a largely meaningless fun-run, one can still appreciate having your parents watch you do your thing. I did not feel good when I first started to warm up. My legs were heavy after a week of walking and standing in lines, and my belly was even heavier from a week of eating way more food than I typically eat at home. After a few laps around the parking lot, I started to loosen up a bit, and the adrenaline begin to pump. It was kind of interesting to see all of the various runners warming up (2600 total!), and many of the women were dressed in mini-skirt versions of Disney Princess dresses. One pretty fit looking guy was even wearing a nearly full Minnie Mouse costume, and Belle (my personal favorite princess – with a 3-year old daughter I have to have one!) and the Beast were hanging out at the starting line. I was surprised to find only about 20-25 people in the front corral for sub-7:00 min/mile pace runners. I began to worry that I might not even be able to keep that pace up, but I settled into my usual stretching routine and reminded myself to hold back at the start as much as possible. My plan was to shoot for a 6:30 pace for the first two miles, and then see what I had left for the final 1.1. I didn’t know if this would be posible, but I was ready to find out.

When the gun fired, I went out way too fast (I always do). I managed to get myself under control, and after about the first 1/2 mile I settled into a 6:30 min/mile pace. The first mile wound around the parking lot and through some of the staff/maintnenance areas of Epcot – not very exciting scenery. There was a very slight upward grade, not even a hill, but enough to make me a bit uncomfortable since any downgrade to follow would not be steep enough to regain lost energy (being from NH, I prefer slight to moderately rolling courses over flat ones). At the 1-mile marker, the official clock had me at 6:19, which was not far off where I wanted to be, and we were entering the park near Mexico in the World Showcase. Running around the lake for the next mile was much more fun, and each country had representatives stationed outside to cheer on the runners. Several Disney Princesses were also stationed along the route (I counted Mulan, Snow White, and Sleeping Beauty), which was a nice touch and made me wish my daughter could have come along. 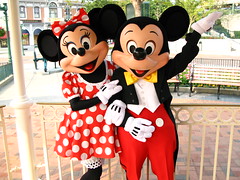 I hit two miles right around 13:00, and was still right on target. The next quarter mile was tough since it wound around a bunch of tight turns, making it difficult to maintain a steady pace. We eventually emerged once again along the lake, and were heading straight under the “Big Ball” (otherwise known as Spaceship Earth) for the final stretch. It was at this point that someone along the course yelled to me that I was in tenth place, and I was frankly stunned, and the burst of adrenaline this provided kept me going through a tough patch. I looked behind and saw only one guy who I thought had a chance of catching me, and he seemed to be making up ground. I used a top-ten finish as motivation to pick up the pace, and I managed to hold him off. As I passed under the “Big Ball” I managed a feeble wave to Mickey and Minnie (our final cheerleaders), and dug in for the final quarter mile. Over the final 0.25 I sped up from a 6:45 pace to a 5:30 pace at the finish, held my tenth place position, and had a clock time of 20:12.

All things considered, the race for me was a success. Sure I was over a minute off my best time from last Fall, but it could have been a lot worse. I could rationalize that tired legs from a long and busy week, a too flat course with too many tight turns for my liking, and too much food the night before added precious seconds that robbed me of a sub-20:00 time, but that would really be pointless. I’m happy with my time, my pace was a few seconds/mile faster than my target, and my motivation for resuming training when I return home is now very high. However, what I will remember most is my Dad’s proud reaction to the fact that I came through as the tenth finisher out of ~2600 runners. Now that I have a young son of my own it’s easy to see the enjoyment and thrill you can get from watching your children’s accomplishments. It’s even nicer to see that the ability to be proud of your kids never really goes away, no matter their age or what it is that they do. When I got back to the hotel, my son asked me if I won the race – I told him that I did well but didn’t win, but in reality I felt like I had.