It’s been a long time since I’ve written a race report, the main reason being that I simply have not run that many races in the past two years. My last race was back in April of this year, a 5K in which I ran a time of 19:20. Given my lack of consistent training last winter (may sub-10 mile weeks), I was pleased with that result heading into the Spring and Summer, and decided to set a goal of knocking off my 4-year-old 5K PR (18:51 set in 2008) before the end of this year.

This summer I’ve taken my training to another level with 320 miles run in July and August. I started working with a coach (Caleb Masland) in late July, and have been doing some pretty hard workouts in prep for the Smuttynose Rockfest Half Marathon at the end of this month. I’ve also been taking Taekwondo classes twice per week since January, which has been a huge boon to my stability, balance, and leg strength. This renewed commitment to hard training has already begun to pay dividends as I’ve had some very solid training runs in the past few weeks. I was excited to test my fitness in a 5K, and last Friday evening I had the chance to see how much improvement I’ve made since Spring.

The Friendly Kitchen 5k is an annual race held here in Concord, NH, and is a great event because all of the proceeds go to support our local soup kitchen (it was destroyed in a fire a few years back, and funds are badly needed to aide the rebuilding effort). There’s also an enormous raffle with a ton of prizes and race entrants have a very good shot of winning something. The race itself is reasonably flat (only hill is one big overpass that you have to go over twice), but there are a ton of turns (see map below) and a good portion is on gravel trail and grass which can slow things down a bit. 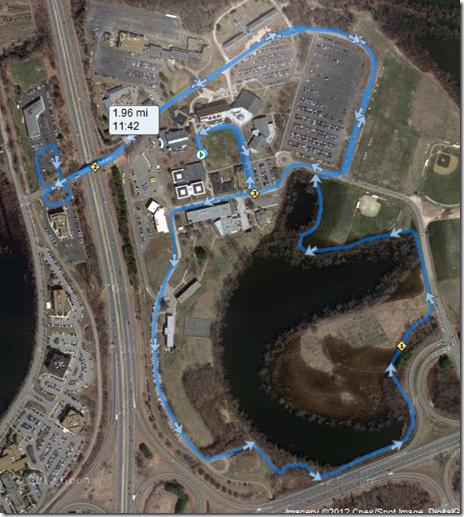 My goal heading into the race was to run sub-19:00, and if I was feeling good I thought I might have a shot at a new 5K PR. However, the weather at the start was mid-80’s and humid, which tempered my expectations a bit (I tend to struggle in heat and humidity).

At the starting line, I noticed that something felt strange in one of my shoes (adidas Hagio). Turns out I forgot to put the sockliner back in my left shoe before lacing them up, so I had no choice but to run the race with an artificial leg length discrepancy (dumb!). When the gun went off I settled into my usual sub-6:00/mile early race pace (see pace graph below) and thought I’d see how long I could maintain it. Normally I last about a half mile before the pace creeps back up above 6:00/mile, but not on Friday. Running sub-6:00 actually felt reasonably comfortable for the first time ever, and I clicked off the first mile in about 5:54.

The going got a bit tougher in the first half of mile 2, particular on the grass section, and I started to feel the pace slow a bit – I had settled in behind a group of 4-5 other runners and they seemed to be equally affected by this section of the course. I rallied a bit from mile 1.5-mile 2, and managed to get the pace back under 6:00/mile for a stretch, and then hit the overpass which knocked me back down a bit (see the two peaks in the pace graph below – both going up the overpass). We had to run up over the overpass, loop under it, then cross back over a second time back along the same course – this was definitely the toughest stretch since it involved two quick up and downs and a bunch of tight turns. 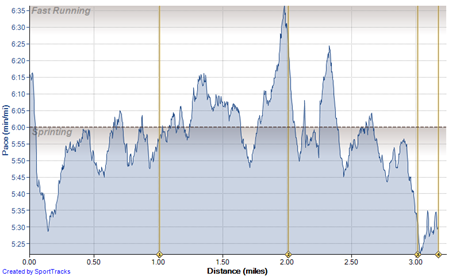 I knew that if I could keep my average pace under 6:00/mile I’d have my PR, and I was running right at 6:0-6:01/mile by mile 2.5. The thought of a new personal best motivated me, and I managed to pull off a quick final half mile with a strong finish, despite another bunch of tight turns. As I came into the final tenth of a mile my average pace was 5:57 on my Garmin, but approaching the finish line I saw the clock ticking quickly toward the 18:51 mark. I crossed at 18:53, a bit perplexed at how I didn’t earn a personal best.

Turns out my watch measured the course at 3.17 miles, so although I ran an average pace of 5:57, I wound up running farther than 3.1 miles. I don’t think the course was long, and I don’t think my Garmin was off (it’s never off by that much for a 5K), but rather I think I simply didn’t cut all of the turns close enough, and there were an awful lot of them. Despite this, I managed a 9th place finish overall out of about 250 runners, and second in the 30-39 age group – very satisfied with the result given where I was 6-7 months ago!

If nothing else, the race gave me confidence that I have my speed back, and that I have a strong shot at shattering that long-standing PR this year. Give me a race with fewer turns on a cool day, and that 18:51 is going down!

Oh, and I won a soup bowl and a package of ramen noodles for my second place AG finish, and a $10 gift card for a local taco joint in the raffle – all in all a great evening! Excited to be back on the race scene!