A few months ago I wrote a post describing a new line of shoes being developed by GoLite footwear. The line from GoLite Footwear features what they call “Baretech technology,” which among other things includes the fact that they have a more anatomical last (the shape of the shoe better matches the foot) and are zero drop, meaning that there is no heel lift. Given the paucity of true zero drop shoes on the market, I was intrigued by what GoLite had in the works, so I got in touch with them and they offered to send me a trial sample of the GoLite Amp Lite, which is billed by GoLite as “everything you need in a distance trail runner: performance, lightweight protection and durability. The Amp Lite upper also features a TPE saddle that secures your foot in place even on the harshest terrain” (disclosure: these shoes were provided free of charge by the manufacturer). 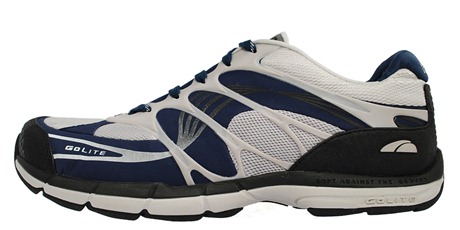 I’ll point out at the outset that GoLite made a point of emphasizing to me that these shoes were not intended to be minimalist in the sense of being stripped of all of the bells and whistles found on most shoes on the market today. This is important, because they are not trying to produce the next Vibram Fivefingers type shoe – to compare them directly to shoes like the Vibrams would be apples to oranges in a sense. Rather, the GoLite Amp Lite is more like a traditional shoe with a zero drop sole, which makes it one of the most unique and unusual shoes I have ever reviewed. 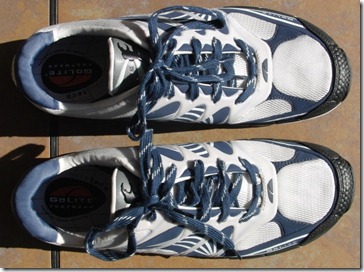 From a purely structural standpoint, other factors besides being truly zero drop that differentiate the Amp from more traditional shoes are that it has a relatively wide fit through the midfoot and forefoot (see shoe photo above), and it comes with swappable insoles that allow you to adjust forefoot thickness according to personal preference (this feature is very cool! – see photo below). The insoles do seem to have some type of built in arch support – feels like a thicker bar of cushion running horizontally across the midfoot. Finally, the Amp features GoLite’s “soft against the ground” technology, whereby the foot rests on a firm platform, underlain by soft material that deforms when in contact with irregularities on the ground. This helps the shoe mold better to the ground surface, and helps prevent levering and instability that can occur when you step on a rock in a shoe with a harder outsole. 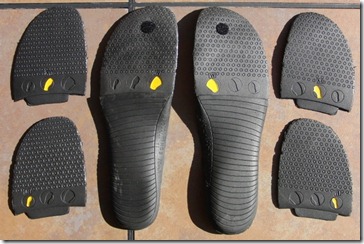 Let me start my personal review with my biggest gripe about the GoLite Amp Lite – they are anything but Lite. In fact, the Amp is one of the heaviest and bulkiest shoes that I own, dwarfing most of my more often used road running shoes in both profile and weight (my pair are about 12.5 oz). I knew about the weight of these shoes before I received them, and they are not out of line when compared to many popular trail shoes on the market (think Brooks Cascadia). However, they are extremely heavy for me considering that my preferred shoe weight ranges from my 3.8 oz Mizuno Wave Universe at the low end up to about a max of near 10 oz in something like the Brooks Launch. The GoLite Amp is not a shoe that’s going to make you feel fast when you put it on your feet. 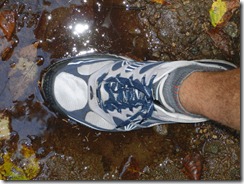 The weight of the GoLite Amp was an immediate issue for me when I tried to run in them – it’s very hard to go from a shoe that weighs half as much to one that weighs 3/4 of a pound without noticing a big difference. However, what was fascinating about these shoes is that since they are truly zero drop, running in them felt incredibly strange. Here was this big, bulky shoe that otherwise could pass for a typical running shoe, but it was allowing me to run with nearly flawless midfoot/forefoot form. The Amp is the shoe that really made me believe in the value of zero drop, as removing the heel lift fundamentally alters the running experience. It also has a fairly firm feel underfoot, which helps a lot with form maintenance. I’d go so far as to say that it was almost impossible to force myself to heel strike in these things, and my week of wearing them (along with the Mizuno Wave Universe) corresponded to the week that saw my breakthrough in converting my stride from heel to midfoot. It’s really amazing to feel the difference that zero drop makes, and I’m really looking forward to the coming years when we will surely be seeing a wider variety of zero drop shoes beginning to fill this sector of the running shoe market.

I will openly admit that I have not run very much on the Amp, nor do I see it as a regular member of my running shoe rotation because of it’s weight. However, for someone looking for a zero drop shoe with a bit of cushion and a more traditional appearance, this could be the shoe you have been waiting for – Donald over at Running and Rambling wrote an excellent review of the Amp in which he expands on this thought. For me, I suspect the Amp will be primarily used for running in the winter when conditions get nastier outside and being fleet of foot is not much of a concern.

Despite my issues with the weight and bulky construction of these shoes, I have actually been wearing them fairly often – just not for running. I have reached a point in my thinking about shoes where I view a raised heel as a both largely unnecessary and often a nuisance. As a result, I try to spend as much time as I can either barefoot (around the house) or in shoes that are as flat as possible. I wear my Vibrams a lot for walking and to go out and about, and the Amp has provided me with a second option as a flat walking/out and about shoe. The weight is far less of an issue when walking, and for that reason the Amp will see plenty of use in the coming months, particularly heading into the cold of a NH winter. Furthermore, whereas I am hesitant to wear Vibrams to work, I would not hesitate to wear the Amp given their more conservative and traditional styling, so they may see some use there as well.

I’ll end this review on a high note for the Amp by pointing out where I see it to have the greatest potential – it’s a nearly ideal light hiking shoe. I’ve done my share of hiking in heavy boots over the years, and now prefer to avoid them unless they are absolutely necessary. Last week we took my kids on a hike to the top of Mt. Kearsarge here in NH – not a long hike, but 1100 feet of elevation gain in 1.1 miles made for some pretty steep sections. Furthermore, a lot of the exposed granite we climbed up was wet, so traction was an issue of great importance since I was carrying my 6 month old son on my back. I decided to wear the Amp on the hike to see how it would perform, and I’m happy to say that it did great. In particular, it provided excellent traction on smooth, wet rock coming back down the trail (sticky rubber on the sole helps here – see picture above and to the left), and it was far more comfortable than my hiking boots (which give me heel blisters almost every time I try to hike in them). At least for now, it looks like the Amp will be my light hiking shoe of choice.

In summary, the GoLite Amp Lite is not a perfect shoe by any means, but by bucking the current shoe norms of high heels and heavy cushion, the Amp has earned it’s place on my shoe rack.

The GoLite Amp Lite is available for sale at Zappos: