Review of Natural Running by Danny Abshire of Newton Running

I’ve recently begun to notice a change in how people are defining the minimalist running movement. No longer is it just about the shoes (or barefooting for that matter) – rather, people are beginning to emphasize that although minimalist shoes and barefoot running are important, their true value lies in the fact that they can act as tools to help you achieve better running form. Even barefoot proponent and “Born to Run” author Christopher McDougall is pushing the “form-first” mantra, as evidenced by the following quote from an interview with Bill Katovsky on the Zero Drop Blog:

“I’m more interested in the future of running form. I couldn’t care less what people wear; I’m more concerned about what they do. For too long, all we’ve heard about is what to buy; what’s been missing from the conversation has been how to run properly. I’m convinced that the next big wave in running won’t be footwear, but a surge in running coaches who teach proper, gentle, barefoot-style form.”

Update 12/13/10: Christopher McDougall emailed me and wanted to emphasize that he has been pushing “form-first” since day one. Here’s a quote from a post on the barefoot running debate from his blog:

“…the secret to injury-free running isn’t the proper shoe. It isn’t stretching. It isn’t even training mileage. It’s skill. Like every other sport, healthy running is all about technique. But why hadn’t I ever heard that before? All I ever heard, over and over, was about shoes. Every podiatrist, sports physician, and running magazine preached endlessly about the absolute necessity of corrective footwear. I was never told what to do; I was only told what to buy.”

The thinking is that barefoot-style running form will allow you to run more efficiently and with less likelihood of sustaining a dreaded overuse injury. If there’s one thing that runners fear above all else, it’s an injury that prevents them from logging miles out on the road and trail. While the verdict is still out on whether all runners might benefit from changing form, my anecdotal experience in the form of receiving emails from readers is that changing running form has the power to allow at least some subset of formerly hobbled runners to run injury free – of this I am now 100% convinced. My own form change experiment has been both fun and fascinating, and is still a work in progress (probably always will be), so I was excited and curious when I was contacted by Backbone Media and Velo Press about reviewing Danny Abshire’s new book called Natural Running (written with Brian Metzler of Running Times Magazine).

If you don’t know Danny Abshire, he’s one of the cofounders of Newton Running, makers of the popular and pricey Newton brand of running shoes. Newton is unique in that their mission from the start (they were founded in 2007) was to produce shoes that fostered a natural running style. Abshire also has long history as a maker of custom orthotics, and he tells this story in the book – he’s a big proponent of proper forefoot balance and believes that orthotic intervention is warranted in some cases to achieve this balance. I personally don’t have much problem with this in some cases, but the question remains whether some types of forefoot imbalances are a product of our shoe-wearing history and whether wearing more minimal shoes can help correct imbalances by allowing the foot to strengthen and work more naturally – the verdict is still out. Hardcore minimalists and many barefoot runners might argue that orthotic intervention is anything but “natural,” though I prefer to not be dogmatic on issues like this where solid evidence is still lacking. This, however, is a discussion for another day.

In a nutshell, Natural Running is described by Abshire as a style that mimics what we do when barefoot: light landing on the midfoot/forefoot, slight forward lean of the torso, and a landing underneath the center of gravity (the hips). In his book, Abshire discusses the problems with modern shoes, the basic biomechanics of the running gait, and provides helpful tips on how to assess your own form and pick out any potential problem spots with your feet. The recurring phrase that he use repeatedly throughout the book is that a runner needs to “stay in balance with gravity.” He views proper balance as being of utmost importance, and deviations from proper balance can set up a chain reaction of negative events through our joints, particularly if we pound the pavement with our heels as we run. I found this discussion interesting and informative, and Abshire’s writing style is one of the patient and fatherly coach who simply wants you to be able to run better.

The last several chapters of Natural Running lay out a series of strengthening exercises and form drills designed to help you make a smooth transition to natural running. These are detailed, but like so many of the workout guides found in popular magazines like Runner’s World, I wonder how many people will take the time to follow them. I’m more of a jump in and (carefully) try it kind of guy, and this technique seems to have worked well for me. That being said, if you are looking for detailed information, this book is an excellent choice in most respects.

I only had a few points of disagreement with what Abshire has to say in Natural Running. First, he repeats the oft used mantra to “land directly under your center of gravity (hips).” For example, here’s a direct quote:

“Put simply, have your feet contact the ground beneath your center of mass. From there, you’ll be set up for efficient whole body kinematics. If your foot strikes are slightly in front of your body mass, you’re braking and will need to add power to keep moving forward.”

As I outlined in a long and detailed post on where footstrike should occur, I don’t believe that it is physically possible to land directly under your center of mass. Steve Magness of the Science of Running blog agrees, and wrote a long post himself explaining why. It may be a minor point, but it’s repeated numerous times in the book, and I have yet to see anybody actually doing it. A more accurate way to phrase things would be to land slightly in front of the hips, and allow maximum loading to occur when the foot is under the center of mass. Alternatively, it can be effective to suggest landing under the center of mass as a cue, with the understanding that it doesn’t really happen in practice.

Another point of question is when Abshire states the following:

“The process of sensory communication from your feet is at its best when you are barefoot. That sensory interaction still happens if you’re wearing shoes, but it works a heck of a lot better if you can feel the ground through your shoes. If your foot is raised high off the ground, as is the case with many traditional running shoes with foamy midsoles, the sensory input is dampened considerably.”

I agree with the above statement, but it’s a bit odd considering that Newton shoes generally have a very thick midsole that sits the foot high above the ground (see photo below). Granted, the midsole is firm and provides better sensory input than a soft slab of EVA, but combined with the odd sensation of the forefoot lugs, it’s still far from being barefoot-like. Don’t get me wrong, I’m enjoying running in a nearly zero-drop pair of Newton Distance Racers right now, and they do allow easily for a midfoot stride (see video below), I just don’t think they provide the ground feel suggested by the above quote (certainly nowhere close to a shoe like the Vibrams, or even a low-profile road flat). Again, a small point, but one that needed to be mentioned.

On the plus side, my friend Brandon of the Brandon’s Marathon Podcast recently posted a photo of a lower profile and apparently zero-drop racing flat that Newton has in development (see photo below) – the zero drop march continues to move forward! 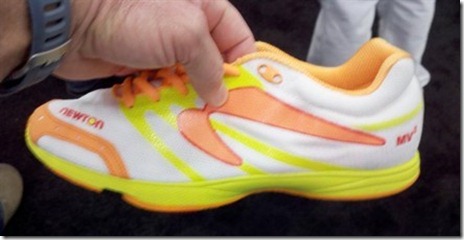 All-in-all, Abshire’s Natural Running was a great read (I read it in 3 days!) and I would highly recommend it as a guide if you are looking to transition to barefoot-style running form and want to keep your shoes. Abshire is very scientific and sensible in his approach, and despite my few small points of disagreement, I found most of the information to be high quality and very useful. He clearly know his way around the human foot, and I anticipate that this book will find it’s place alongside others which are attempting to change the way we run. I don’t believe that there is such a thing as a perfect form that equally applies to every person, so it’s up to the reader to try out Abshire’s approach to see if it works for them. As Abshire states, we are in the midst of a running re-evolution, and if you desire to get off your heels, Natural Running is a resource that will help you get back to running naturally like you did when you were a kid.