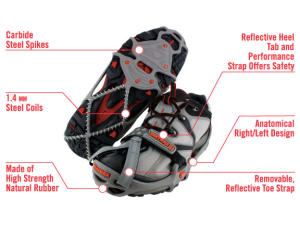 Dealing with traction on winter runs can be challenging for a road runner. Most of the time I find that a decent pair of lugged trail shoes suffices for mixed conditions on sidewalks and roads (mostly crusty ice and snow up here in NH), but there are certain times when a trail shoe alone won’t cut it. Running in or just after a snowstorm is one of those times – combine extreme cold, a fresh layer of powdery snow, and a layer of ice underneath and things can get pretty slick. Such was the case on my run earlier today – 5 degrees Fahrenheit outside with a steadily falling snow made for a cold, slippery run.

In the past I’ve used YakTrax Pro cleats in cases where a bit of extra traction is needed. These are the standard YakTrax with the metal coils underfoot. They’ve always worked well, but the consistent complaint I hear about them is that the rubber bands inside the coils are prone to snapping, which renders them useless. I don’t use mine except when there is a layer of snow on the ground, so they don’t come out often, and never on bare asphalt. As such, I have never broken a pair, but I can see how durability would be a concern.

A few weeks ago YakTrax contacted me about trying their YakTrax Run cleats (Disclosure: Yaktrax provided the product reviewed here free of charge as a media sample). We’ve had a few decent storms so far this winter, so I’ve now taken them out a few times and feel comfortable commenting on their performance. 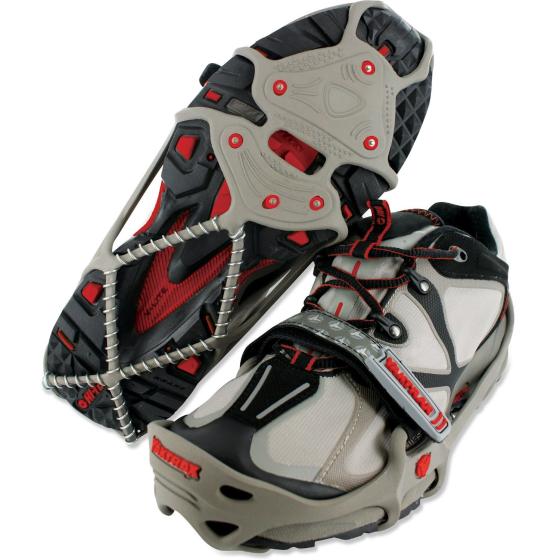 The big difference between the YakTrax Pro and YakTrax Run is that on the latter the coils under the forefoot are replaced by two studded rubber and plastic plates. The studs are made of carbide steel and the plates they are attached to are removable – apparently the stud plates can be purchased independently for replacement if needed (they seem to be hard to find, Amazon is out of stock). The studs are short enough that they don’t feel uncomfortable when you hit a patch of bare asphalt (feels kind of like running in a Newton shoe), and long enough that they dig in well on bare ice. I tend to load more under my midfoot to forefoot, and I found traction on ice and plowed (yet still snow covered) road to be very good.

The heel of the YakTrax Run retains the familiar coils from other models, and I find these do a better job in deeper snow. A good portion of my run today was on sidewalks covered by about 4-5 inches of light, fresh powder. Once packed down the forefoot studs aren’t deep enough to help much, so I found myself aiming more for my heel to provide traction. It’s tough to get good traction on fresh powder over ice, and I managed to not fall over the course of 3.5 miles. I did slip a few times, and if deep, fresh powder is a regular condition for you there might be better options out there (have not tried them myself, but I’ve heard good things about the Kahtoola Microspikes for when more extreme traction is needed).

It’s hard to comment on durability as I’ve only used these twice so far (I typically only use Yaktrax a handful of times each winter when storms hit), but in a quick perusal of reviews on Amazon I did not see a large number of complaints about them breaking (there were a few, maybe 2-3 out of 24 reviews). My tactic when encountering a short stretch of bare asphalt is to focus on a forefoot landing and avoid direct contact on the coils, hopefully this will keep them in good shape (the ability to do this is an advantage of the Run model over the YakTrax Pro). I would assume that if you have a pair and they break, YakTrax will replace them under warranty if you contact them within 90 days (should cover a winter of use – they are clear to say that these are not to be used on bare asphalt or concrete). I’d guess most retailers would also exchange a pair that breaks prematurely (Zappos carries them and they are typically great with returns).

Overall I found that the YakTrax Run did a pretty good job for the conditions I encounter on roads and sidewalks during or after a snowstorm. They are great on icy surfaces and snow-covered, plowed road, and decent in fresh snow as long as it’s not too deep. My runs are not suited to a spikier traction device so the Kahtoola Microspikes are not something I’d really need, but for occasional traction needs encountered by a road runner in winter they function well.

For do-it-your-selfers, you could also try screwing your shoes (get your head out of the gutter!) – my buddy Sam recently did this with a pair of Hokas and some Ice Spikes, and I’ve done it with La Sportiva Hobnails. It’s also possible to just use some sheet metal screws from a hardware store – minimallyshoddy recently wrote about screwing his Skoras, that’s a risky proposition!

Where to buy – YakTrax Run cleats are available for purchase at Amazon.com and at Zappos.