A few weeks ago I posted a survey asking Runblogger readers to vote for their top 3 road and trail shoes of 2013. The response was incredible! A total of 523 people submitted votes for top road shoes, and 233 submitted votes for top trail shoes. I’ve tallied the road shoe votes and the results are presented in this post (I’ll hopefully get the trail shoe results up later this week or early next week, it has taken longer than expected to compile the data).

For the road shoe survey, 523 people submitted a total of 1,200 shoe nominations (some only voted for one or two shoes rather than three). I removed any votes where a brand was entered without a specific shoe model, and I’ve pooled the votes by shoe model name rather than version number to keep things cleaner (if you want to see the raw votes with shoe model versions, click here to view the Excel spreadsheet).

First, here is the share of votes by brand: 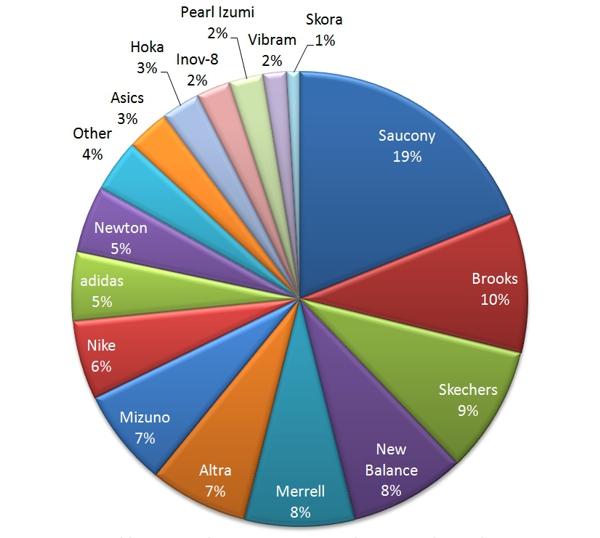 I wasn’t surprised that the top two brands were Saucony and Brooks, but I was surprised by how much Saucony dominated the other brands in the survey. Saucony shoes received 227 votes, and Brooks at #2 received over 100 fewer at 119 total. Skechers turned in an impressive performance coming in at #3 – they also did quite well in a poll in the Running Shoe Geeks group on Facebook. Skechers is one to watch out for as more people get over the Skechers brand baggage and give their performance shoes a try (I was once one of the non-believers, but have been converted to the point where I now work with them regularly on shoe development).

Now for individual shoe results. Below are the top 20 shoe models with number of votes (the full list can be viewed here). You can click on the shoe images in the table to view a review of that shoe (where I haven’t reviewed the current version of a particular shoe yet, I’ve linked to my most recent model review).

1. I’m not surprised that the Saucony Kinvara came out #1 (even though I wasn’t crazy about v4 of the Kinvara). It’s a great all-around shoe, and one of the first that I recommend to people looking to go lighter or lower drop. Personally, I’d like to see shoes like the Kinvara, Brooks Flow/Cadence, NB 1400 v2, Mizuno Sayonara be the starting point from which people move either up or down to more structured or minimal shoes.

I have to admit that I was a bit surprised by the magnitude by which the Kinvara beat out even shoe #2. Impressive results for one of my personal favorite shoes!

2. I suspected the Skechers GoRun would do well, but would not have guessed it’d be #2 overall.

3. Saucony nabbed a second spot in the top 5 with the Virrata. They did something really smart with the Virrata – it’s zero drop but is really well cushioned and doesn’t look or feel like a minimal shoe so is less likely to scare off people who fear going minimal yet want zero drop.

4. The Merrell Bare Access at #4 was a big surprise to me. I love it as a casual shoe but find it a bit firm for running. Need to get some miles on the v3 for a review.

5. No Asics or Nike in the top 20 (I at least expected the Nike Free to show up in at least one of its iterations).

6. The closest thing to traditional shoes in this list are the New Balance 890 and Mizuno Sayonara, and even those are fairly lightweight training shoes. No heavy, 12mm drop shoes anywhere near the top. This probably is a reflection of the readers of this blog and my own more minimal bias, but Runblogger readers tend to be shoe geeks so it’s interesting to see how the results here contrast with typical top selling shoes at run specialty (e.g., shoes like the Brooks Adrenaline, Saucony Guide, Asics Nimbus).

7. The only real ultraminimal shoe here is the Merrell Vapor Glove, again a reflection that readers of this blog tend to gravitate toward lighter shoes that retain some amount of cushion (with drops anywhere from 0 to 10mm). I have not reviewed the Vapor Glove, but have worn it a bunch casually and have run in it a handful of times. It’s probably the best ultraminimal shoe I have ever worn.