Last month I posted a survey asking Runblogger readers to vote for their top 3 road and trail shoes of 2014. This was the second year that I conducted this survey (view last year’s results here), and once again the response was great. Over 550 people submitted votes for top road shoes, and over 250 submitted votes for top trail shoes. I’ve tallied the road shoe votes and the results are presented in this post (I’ll hopefully get the trail shoe results up next week).

For the road shoe survey, I received a total of 1,231 shoe nominations (some individuals only voted for one or two shoes rather than three). I removed any votes where a brand was entered without a specific shoe model, and have also eliminated any duplicate votes by the same person.

Before I present the results, I will say that these are intended to show preferences among readers of this blog. I tend to review shoes on the more minimal end of the spectrum (mostly racing flats and lightweight, moderately cushioned trainers), so there is clearly a bias present. I make no claim that this survey represents broader shoe preferences among runners (it doesn’t).

Let’s start with the the share of votes by brand: 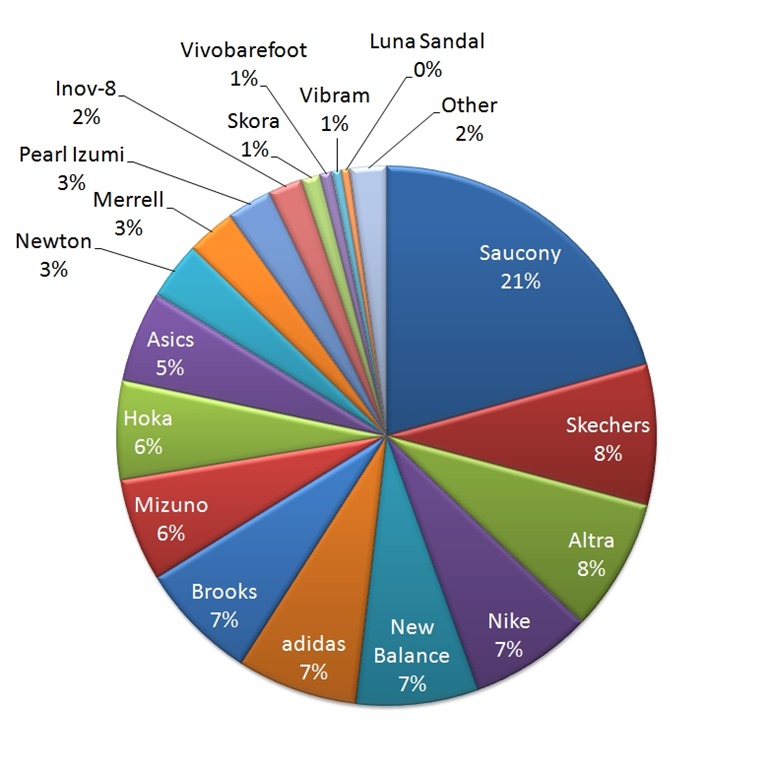 For the second year in a row Saucony earns the top brand share by a wide margin. Skechers moves up from #3 to #2, and Altra jumps from #6 to #3 in my rankings. Merrell takes the biggest fall, going from 8% share of votes in 2013 to only 3% in 2014. Once again I’m not surprised that Saucony comes out #1, but I am surprised by the size of the margin (much of which is due to the popularity of the Saucony Kinvara, see below).

Now for individual shoe results. Below are the top 20 shoe models with number of votes. For this list I chose to include only the most recent model that was on the market for most of 2014. The reason for this approach is that I got a lot of votes that specified either earlier models, or did not specify a model number at all. The latter could indicate either the current model or the original. For example, I received 26 votes for Saucony Virrata, and 13 for the Virrata 2. In this case the list reflects only the Virrata 2 votes. If you’re curious to see the raw list of shoe votes, you can view it in a Google Spreadsheet here.

You can click on the shoe images in the table below to view a review of that shoe (where available).

1. The Saucony Kinvara alone (all versions combined) received more votes than any other brand (all shoe models combined), and this is a reflection of the popularity of this shoe among readers of this blog. It continues to be a great all-around shoe, and one of the first that I recommend to people looking to go lighter or lower drop.

2. The popularity of more heavily cushioned shoes is apparent here compared with last year as Hoka grabs the #2 spot with the Clifton and the #18 spot with the Huaka. I wasn’t a huge fan of the Clifton, but it’s clear that it’s a popular shoe. The maximally cushioned Altra Paradigm also grabs a spot at #19.

3. Skechers continues to do well with three models in the top 20 (none of which I reviewed myself). Though they still are battling their reputation, they’re making some great shoes. The most recent iterations of the GoRun, GoRun Ride, and GoMeb Speed are the best yet.

4. adidas is doing good things with their Boost midsole material. Both the adios Boost and the Boston Boost have gotten rave reviews from shoe geeks. I have not tried the Boston Boost myself, but the consistently positive feedback I’m hearing has me tempted. At the least, I’ll likely try v2 if/when it comes out.

5. No real ultraminimal shoes here. This is probably a combo of the declining popularity of barefoot-style shoes, as well as a reflection that I and readers of this blog tend to gravitate toward lighter shoes that retain some amount of cushion (with drops anywhere from 0 to 10mm).

6. The popularity of the Saucony Virrata here is a good indicator of the bias of this survey – the shoe is popular among my readers but has been discontinued by Saucony, presumably due to poor sales. I’ve also heard that the Hoka Huaka was almost cut from the Hoka line as well. That’s a shame as I liked it a lot more than the Clifton.