Last week I posted the results of the 2014 Runblogger reader survey of top road running shoes. In this post we move on to the trail shoe results (delayed a bit by a stomach virus that has ripped through my house over the past week…).

For the trail shoe survey, I received a total of 491 shoe nominations from over 250 individuals (some individuals only voted for one or two shoes rather than three). I removed any votes where a brand was entered without a specific shoe model (there were a lot of these), and have also eliminated any duplicate votes by the same person.

Before I present the results, I will say again that these are intended to show preferences among readers of this blog. I tend to review shoes on the more minimal end of the spectrum (mostly racing flats and lightweight, moderately cushioned trainers), so there is clearly a bias present. I make no claim that this survey represents broader shoe preferences among runners.

Let’s start with the the share of votes by brand: 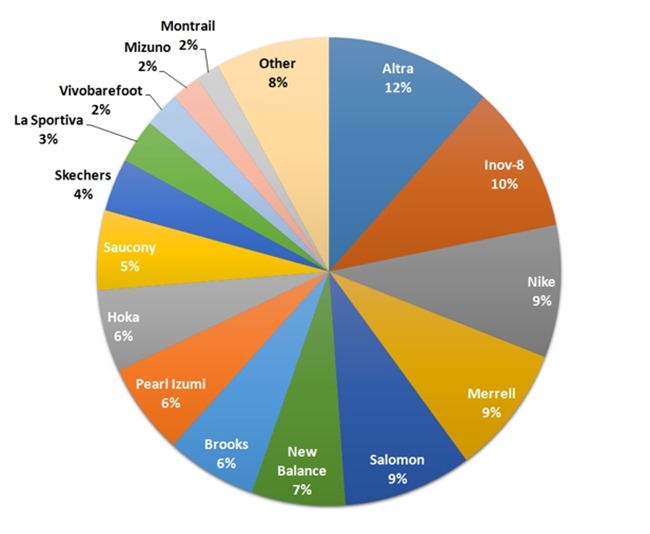 Unlike the road shoe survey, where Saucony ran away with first place, the brand shares are more level for the trail shoe survey. Altra takes over first place from Merrell with a 12% share, and Inov-8 jumps from #3 to #2 with 10% share. Nike makes the biggest leap from 2% to 9% share, largely due to the popularity of two models (see below). New Balance dropped out of the top 3, likely due to the fact that version 2 of the MT110 model was not as big a hit as version 1. I was a bit surprised that Hoka did not come out higher given their popularity among the ultrarunners.

Now for individual shoe results. Below are the top 20 trail shoe models (22 actually due to ties) with number of votes. For this list I pooled shoe versions and ranked them by model since there were fewer total votes compared to the road shoe survey. If you’re curious to see the raw list of shoe votes, you can view it in a Google Spreadsheet here.

You can click on the shoe names in the table below to view a review of the most recent version of that shoe (where available).

1. Kind of surprising to see Nike at the top of a trail shoe survey! Or maybe not – I’ve been hearing raves about the Nike Terra Kiger and Wildhorse for the past year+, and both are in the top 5 here. I don’t run a lot of trail miles myself, but I couldn’t resist giving one of these a try, so I bought the Wildhorse II a few weeks ago. I’ve been running in them on snow and they live up to the hype – super comfortable shoe, solid traction, great cushioning, and they look great.

2. Altra continues to perform well here with two models in the top 5. The Lone Peak was the top trail shoe in last year’s survey, and the Superior jumps 7 spots to number 3.

3. I expected to see more Hoka models here, especially since the Hoka Clifton appeared in the top three of my road shoe survey. For trail, we only have the Stinson at #17 and the Huaka at # 19. This could be a reflection of the bias of this survey toward more minimal models, but we do also see the maximally cushioned Altra Olympus and Skechers GoRun Ultra both ranking here above the two Hoka models.

4. Merrell was the top trail shoe brand by vote share last year, but they drop a few ranks this year. The Trail Glove still shows up here, one of the few truly minimal models left, and the Bare Access Trail did well. However, none of the new AllOut line are represented – in fact, there were very few votes for any shoe in this collection. The Mix Master and Ascend Glove, both of which were top 10 last year are both gone.

5. The New Balance MT110 has a strong fan base, and most votes specified the old version 1 rather than the update. The latter seems to have suffered from a poor last change and does not appear to have the following of the original.

6. Inov-8 does trail well, and the Trailroc line continues to be popular in this survey. The luggy X-Talon 212 is the only shoe here that might be suitable for mud.