The year 2013 was a year of positive professional transition for me, but it was a bit of a bust when it came to running. The year started off a bit rocky, but I pulled things together enough to have a solid race at the Vermont City Marathon on Memorial Day weekend. I managed to put in solid miles through July, but then the reality of my need to wrap up loose ends from the old job and get things rolling with my new career hit hard. My running suffered, and my mileage in August and September was so lousy that I bailed on running the Vermont 50K. Things didn’t get much better into the Fall – there was just too much going on (things have settled a bit, just did a 30 mile week at the end of December!).

As a result of the transition I went through in 2013, I didn’t get to put decent mileage on as many shoes as I would have liked, but there are a few that have stuck out. Below are 5 road shoes that made an impression on me in 2013.

I was wary of trying the NB 1400v2 since it has a higher drop than I usually prefer (9mm HTF), but rave reviews from friends forced me to break down and buy a pair. I was not disappointed! Soft heel, firm forefoot, and super light. And, the price is reasonable – they can typically be found for under $90. I’d rank them as my top shoe of the year due to the combo of performance and affordability. Read my full review of the NB 1400v2 here.

The Adios Boost is another shoe that I was skeptical of due to a higher than preferred drop, but like the NB 1400v2 it worked just fine for me. It also features a soft sole, firm, responsive forefoot, and glove-like fit. The Boost midsole material is bouncy under the heel, and retains its cushioning properties in sub-freezing temps, which is a huge plus for the shoe. The only negative on this one is price – at $140 it’s a much more expensive shoe than the similarly performing 1400v2, and I’m not sure if durability is that much better to warrant the higher price tag. Read my full review of the adidas Adios Boost here. 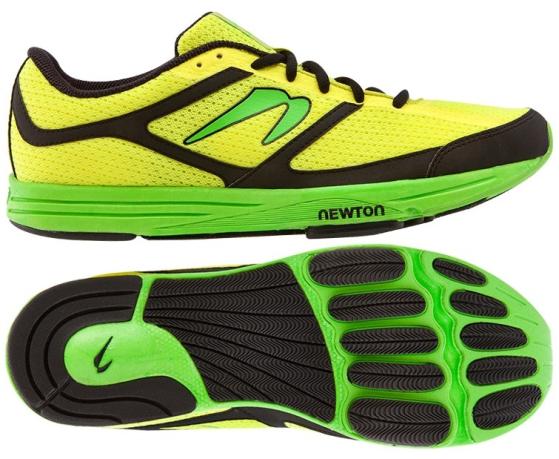 I put a bunch of miles on the Newton Energy this past summer and enjoyed all of them. Like the two shoes above, the Energy has a soft heel and a firm forefoot (notice a pattern here?). The Energy also features the new 5-lug pattern under the forefoot, which makes this shoe more stable mediolaterally than 4-lug Newton shoes. One caveat on the Energy – the heel fit out of the box is sloppy due to the sockliner/insole being too thick. Either remove or swap out the sockliner for a thinner one and the shoe becomes a beauty! Read my full review of the Newton Energy here. 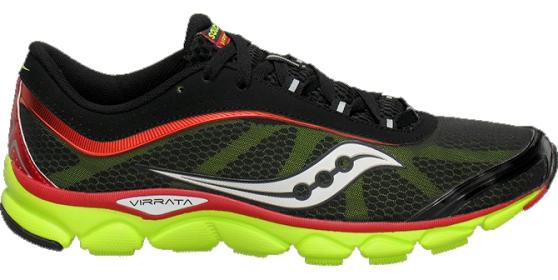 The Virrata was my Spring marathon shoe and it performed well. Great cushioning for a zero drop shoe, particularly under the forefoot. This is one of the few zero drop shoes on the market that I would choose for a marathon length race, and the Virrata price tag is also reasonable at $89.99 MSRP. One Virrata caveat – the shoe fits a bit narrow in the forefoot, but going a half size up solved this for me. Read my full Saucony Virrata review here.

This was a tough choice. I’m going with the Pearl Izumi EM Road N1 at #5 because it’s a very different shoe than the others on this list, and I was surprised by how much I liked it. Unlike the other 4 shoes here, the PI N1 is a very firm shoe, but it rides very smooth. It’s a shoe that I wasn’t crazy about the first time I took it out, but it grew on me with each subsequent run. The upper is awesome – stretchy and accommodating, and the unusual sole architecture is reminiscent of the Skechers GoRun (the GoRun 2 was one of my top 5 last year). Very impressed with this one! Read my full Pearl Izumi EM Road N1 review here.

Honorable mentions among road shoes: Nike Free 3.0 v5, Mizuno Universe 5, Mizuno Cursoris, Asics Gel Lyte33 v2 (note since I’m sure I’ll be asked: I didn’t include the Skechers GoRun 3 since it came out late in the year and I have not reviewed it yet, it’ll be a candidate for 2014)

One last thing: I now have almost 500 submissions for my top shoes of 2013 reader poll, submit yours here if you have not already. I hope to have the votes tallied by the end of the week!