In case you aren’t a subscriber, I wanted to mention that the June edition of Runner’s World (currently on newsstands) includes an article by Peter Vigneron titled “Does Form Matter.” I wanted to thank Peter for including me and my buddy Harry Hollines (the barefoot runner) in the article, and I have to say it was quite a trip to actually do a photo shoot in my little lab. Here’s the picture that was ultimately published in the magazine (that’s my colleague Eric Berry on the treadmill – he’s a far better runner than I!): 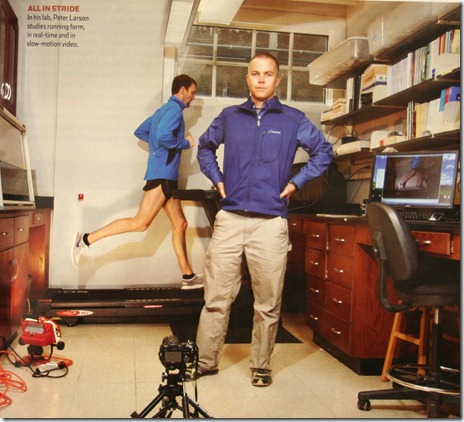 As you can see, I don’t have the fanciest lab in the world, but it suits my purposes since for most of my academic life I’ve studied critters smaller than the tip of your pinky finger (tadpoles). I’m a newcomer to the world of running research, but have learned a lot over the past few years, and I’ve enjoyed getting out and filming runners in real world situations (i.e., races). Lab data are valuable, but I also think it’s important that we also take a look at what runners really do when they’re out on the road, and my first academic publication on running is currently undergoing peer review at a scientific journal (a far longer and more involved process than posting on this blog!).

Anyway, I recommend that you check out Peter’s article – he does a very balanced job on a very controversial topic. He also put together a nice video in which he dissects some of my race videos and gives his thoughts on the form of some elites from the Boston Marathon. Check it out below: