Home / Blog Posts / Running a Marathon: Why You Should Join the Club

Running a Marathon: Why You Should Join the Club 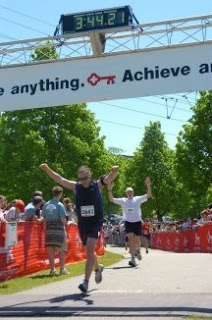 Today during my commute to and from work I listened to Episode 184 of Steve Runner’s Phedippidations podcast (you can download it directly from Itunes by clicking here). In this episode, Steve tells the story of how he managed to successfully complete the 2009 Boston Marathon with only 5 weeks of training, but really, the podcast went much deeper than that, and it really made me think quite a bit about why it is that those of us who run marathons choose to do so. Steve talks a lot about his childhood in this episode, and how running a marathon really was not something anyone would have thought that he would be able to do. Twenty marathons later, Steve has proven them all wrong, and has learned a lot about himself in the process. For many of us who have just started running in the past few years, Steve’s podcast has been an inspiration, and I can honestly say that his encouragement played a big role in my growth as a runner. Getting back to this particular episode on Boston 2009, one quote in particular that came right at the end of the podcast really struck me:

“Run a marathon, not for the purpose of bragging to others that you did, but to prove to yourself that you can.”

For those of us with no chance of ever winning a 26.2 mile race, why do we put ourselves through the pain and mental anguish of such an undertaking. And lets be honest, the pain doesn’t just come from the race itself – training for a marathon involves significant dedication and self-discipline. Who in their right mind forces themself out of the house for a lonely 20-mile run on a weekend morning for the sole purpose of being able to run 6.2 miles longer than that on race day? Are we crazy? Why do we subject our bodies to this? Aren’t there better things we could be doing with our time? I would argue no on all counts, and I’ll try to explain why.

If you want to read the story of how I became a runner and marathoner, you can read this post, but I want to talk a bit more philosophically here about why running a marathon was one of the greatest experiences of my life. I look at it this way – there are few moments in your life that become so etched into your brain that you can recall them like they happened yesterday. My wedding day and the births of each of my kids fall squarely in this category. This is also what running the Vermont City Marathon last year was like for me. I can still recall almost every single moment of that race in vivid detail, and that tells me that it affected me deeply. I shed a tear at the starting line simply thinking about all of the work that had gotten me to that point. I shared stories with fellow runners before and during the race, and the support I received from total strangers was unlike anything I had ever experienced before. Most importantly, however, I learned a lot about myself. I learned that I was capable of doing something that just a year or so beforehand I would have deemed impossible. I had never run more than 3 miles at once, and the idea of running 26.2 in one go seemed absurd. Well, here I am 2 years later ready to tackle marathon #2 in just a few weeks time, and I’m quite sure that this habit is here to stay.

Running a marathon changed me in some fundamental way that I can’t really explain. It’s now not so much something that I want to do, but rather something that I have to do. I need to revisit that feeling of pushing myself the mental and physical brink, and to see myself push successfully through. It’s not that I enjoy the pain in some masochistic way, but rather that I can prove to myself that I can take whatever the marathon dishes out. The last 6-10 miles of a marthon are a true test of human perserverance and mental fortitude, and they really show you what you’re made of.

So, if you’re reading this and thinking, even in the way back corner of your mind, that you might want to run a marathon, I’m living proof that you can succeed. You should do it, and you absolutely can do it. With proper training and dedication, I’m convinced that anybody can complete a marathon. I guarantee that if you do join the club, you will agree that it was well worth the effort.

I’ll finish with a second quote from Steve Runner’s Phedippidations Episode 184 that really sums up this post:

“If you’ve never run a marathon, don’t ask us why we do, let us ask you why you have not.”

Two years ago I would have come up with any number of reasons why I had not. Today however, I have run one, and I’m pretty sure that I know why I will continue to do so. My hope is that you will put on your shoes and join the club.

Update 5/6/09: Need further proof that anyone can run and complete a marathon? Want to feel the emotion at the finish-line as average people do the impossible? Click here to watch a high-quality stream of the PBS NOVA Marathon Challenge documentary free and in its entirety on YouTube.

You just finished reading Running a Marathon: Why You Should Join the Club! Consider leaving a comment!