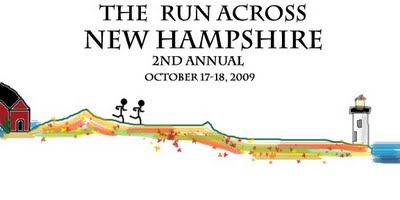 I was recently contacted by a representative from the Seacoast Science Center in Rye, New Hampshire with a request to post information about a charity run that is being done to raise money for the organization.  As a scientist myself, and having visited the SSC on several occasions with my kids, I can vouch for the good things that they do for both children and science, and am happy to spread the word about this fundraising event.  Below are the details provided to me by the SSC rep:

“Ultra marathon runner “Sherpa” John Lacroix will run around-the-clock, from October 17-18, 2009, across New Hampshire, to help raise funds for the Seacoast Science Center. A full time student majoring in Outdoor Education at the University of New Hampshire and endurance athlete, John’s career highlights include completed hiking of New Hampshire’s list of 48 four thousand foot peaks six times, and he is the youngest person to ever complete the Trailwrights 72 Peak-bagging list (and only person under 50 years of age to have done so).

Previously Lacroix has raised over $20,000 on behalf of the American Diabetes Association Research Fund through a documentary film he made on hiking New Hampshire’s 4,000 Foot Peaks. Lacroix ran across New Hampshire in 2008 in part of a fundraiser for the Make-A-Wish Foundation of New Hampshire.

According to Seacoast Science Center Marketing Director Karen Provazza, “With school budgets shrinking, and the increasingly vital role informal science education facilities play in educating today’s children, the need for funding for such facilities is growing. When John asked if we were game in accepting his run as a fundraiser for the Seacoast Science Center, we were thrilled!”

John’s offer made sense all-around. His countless hours in the wildness of our state have given him an immeasurable appreciation for its magnificence. His offer to share his intense connection fits hand-in-hand with the Science Center’s mission to create connections to nature through personal experience.

John’s run, from the hills and rivers of the westernmost part of New Hampshire, to the easternmost shore of the Gulf, can be seen as a lesson in itself; it illustrates the watershed from the rivers to the sea. According to Lacroix, “If my run can spark people’s interest in the environment and help raise awareness of the important work the Seacoast Science Center does, then it is a success. If it raises enough funds help bring school groups to experience the unique, hands-on learning experiences the Center delivers, then it is a huge success.”

Runners of all abilities are invited to run beside “Sherpa” John for a donation of $1.00 per mile or more. If you are not a runner, please consider coming to the Science Center on October 18 to cheer on John and his friends. You can track the route online at http://runnh.blogspot.com/2008/10/run-across-nh-route.html. Additionally, time and location updates will be posted on the Center’s facebook page.

MORE INFO AT A GLANCE:

WHO: Ultra marathon runner “Sherpa” John Lacroix
WHAT: A 125 Mile Around the Clock Run from The Connecticut River to The Atlantic Ocean.
WHERE: Route 9 Chesterfield, NH to Odiorne Point State Park in Rye, NH.
WHEN: Saturday, October 17, 2009 – Sunday, October 18, 2009
WHY: To benefit the Seacoast Science Center

Lacroix’s journey is 125 miles (200 Kilometers) in length and will be run Around The Clock, start to finish without stopping. He will start on the NH Route 9 Bridge connecting Brattleboro, VT with Chesterfield, NH over the Connecticut River. His Run on Route 9 will take him through the towns of Chesterfield, Keene, Sullivan, Hillsborough, Henniker, Hopkinton, and Concord. He will then take US Route 4 through the towns of Chichester, Epsom, Northwood, Barrington, Lee, Madbury, Durham, Dover and Newington. He will then run through the streets of Portsmouth and New Castle before reaching the terminus at Odiorne Point State Park in Rye, NH. He also plans short stints through downtown Hillsboro, Henniker, Concord, Durham and Portsmouth.”

For more information about Sherpa John and his run, visit http://runnh.blogspot.com/.