Last Fall my wife and I signed my 8 year-old son (pictured at left) up for Taekwondo lessons through our town’s rec department. At first, we had assumed that this would be a typical kid activity where we show up, the child participates, and the parents sit on the sidelines for an hour and watch. We were mistaken. The instructor, Master Daniel Jung, a 6th degree black belt from South Korea, felt very strongly that the parents should participate alongside their kids. So began a new adventure in my life…

I have never done martial arts of any kind. In fact, the thought of trying it had never even crossed my mind. But, though my son is an extremely energetic boy, he sometimes lacks the motivation to complete tasks when they get difficult (both mental and physical). We thought that an activity like Taekwondo might provide some discipline and motivation (which it has), and also serve as an outlet for him to burn off some of his boundless energy (which it has also succeeded in doing).

My wife took him to the first class, and came home to report that parents were encouraged to participate, but that my son had not taken to the physical effort with the gusto that she had hoped. The following week, with some amount of apprehension on my part, I took him along with my 6 year old daughter (pictured below), and all three of us participated. I was immediately hooked – the class was an incredible bonding experience with my kids, and the physical workout was way more intense than I had expected. Turns out that being a distance runner in no way prepares you for the demands that Taekwondo makes on your body. 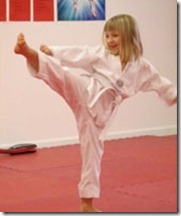 My son slowly improved his effort over the ensuing weeks, and the belt-earning system turned out to be an amazing motivator. He was studying Korean numbers, as well as practicing his kicks at home (which required intense parental vigilance to ensure that his path of destruction stayed clear of furniture, valuables, pets and siblings). I attended each of the following six classes, and after the holidays my daughter, son, and I decided to continue taking classes twice per week together at our instructor’s dojang (NH Kicks in Concord, NH).

I’m now one full month into classes, and the experience has been altogether fantastic. My kids have been loving it, and we all look forward to each class with enthusiasm that has been absent from other activities in which they have participated (gymnastics, basketball, soccer, teeball, dance, and so on…). A big part of it is that we have been doing it together as a family, but the other thing that has made the experience so positive is that Master Jung is a phenomenal instructor. He places family bonds foremost, teaches the kids discipline and respect, and most of all makes the classes fun. He’s particularly good at working out the adults while going easier on the kids – my daughter loves to sit on my feet and watch me struggle to finish off situps, or when I have to hold her over my shoulder while doing lunges or squats. But, they break a serious sweat as well, and they have a blast doing it. Master Jung is a natural with kids, and has even started to prime my 2yo son for a future in the martial arts – so far carrying medicine balls across the gym seems to be his favorite task

One of the most valuable aspects of Taekwondo for a runner like me is the emphasis that it places on flexibility, balance, and strength. One of the things I’ve repeatedly heard from running injury experts like UVA physical therapist Jay Dicharry is that the ability to control one’s body while in single-leg stance is a critical skill for any runner, and Taekwondo practice really hammers on this. We spend a good deal of time each class standing on one leg while performing kicks or other movements (always barefoot). We also do a lot of balance and plyometric work that has massively improved my leg strength in multiple planes well-beyond what the largely single-plane movement of running could possibly do. Try doing three sets of 20 hopping round-house kicks on each leg and you’ll see what I mean – it’s a killer workout!

Because of the need to extend the leg when kicking, we also spend a good deal of time each class working on flexibility. While I’m still sorely lacking in my hamstring flexibility, I’ve come to appreciate the feeling gained from a good ham stretch, and I feel like I have made some progress. I’ve also gained quite a bit of strength in my hip flexors – for the first several weeks after starting my practice I had near-constant soreness in my iliopsoas – constantly lifting the thigh quickly to do kicks really works these muscles. Core work is also emphasized heavily, and ab exercises are usually a part of the intro to each class. I think the strengthening has already paid dividends as evidenced by the fact that I ran a 5K last month on minimal training over the winter and finished 10 seconds faster (19:20) than my best 5K time from last summer. It’ll be interesting to see how I do after a summer of solid run training.

Finally, Taewkondo has really emphasized to me once again the importance of good form and the regular practice of proper movement. Some of the kicks we do require a great deal of coordination, and if you do them with poor form injury is definitely a possibility. I pulled a hip flexor once doing a turning back kick with poor form, and a simple bit of advice from my instructor solved the issue immediately. I do think this can be translated to running – what we do when we run may work for us, but it may not always be the best form we could use to perform the movement of running. Constant practice with the intent of improving form is critical to training the muscle memory required to perform complex movements well.

As a write this I am a yellow-belt green-stripe progressing toward my green belt (six months into my practice). And, I’m not the least bit ashamed to admit that my 8yo son’s ability to kick in a coordinated fashion vastly outstrips my own. He’s found something that he absolutely loves, and this is probably the single most important thing that has come from my Taekwondo experience so far. A few weeks ago Master Jung came to his school so he could do a demonstration in front of his class – he wound up breaking a bunch of boards, including one kick where he leaped over me (I was lying down) and broke a board with a side kick. I’ve never seen his confidence so high as it was on that day, and his classmates were in awe – talk about being king for a day!

So, I’d recommend Taekwondo for any runner – most schools will let you try a class for free. In Taekwondo I have found something that not only supplements my running, but that has become a focused pursuit alongside my running. And, it has strengthened my bond with my kids. It’s been an amazing experience so far!