Rarely have I felt a sense of kinship with an author like I felt while reading “What I Talk About When I Talk About Running,” by Haruki Murakami. I was at first skeptical when I saw this book, thinking that it would be heavy on philosophy, and unsure whether or not it was really a book about running. I can now assure you that if you’re a runner, you’ll love this book. At its heart, What I Talk About When I Talk About Running is Haruki Murakami’s (see his picture below) answer to a question that many runners ask of themselves: Why do I run? The book is his eloquent response to this question, and he answers it with stories about running, race reports, and various other types of personal anecdotes. Murakami sprinkles in a heavy dose of philosophy, but it’s a philosophy that any runner or triathlete will appreciate, and I found myself nodding in agreement on numerous occasions. Murakami is a guy that I would love to go on a run with myself – he is clearly a genuinely passionate runner. 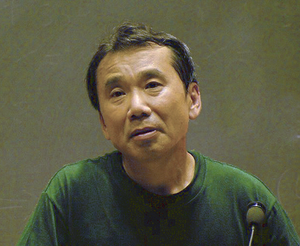 Perhaps what I found most appealing about this book was the author’s sincerity and honesty. Like many of us who log miles with no hope of ever winning a race, running for Murakami is a labor of love, and it plays a central role in his life. He runs so that he can stay healthy and continue to write novels, and he runs because he simply loves to run. Murakami is also very comfortable with his shortcomings, and he openly admits that he is not a perfect person. His description of overcoming his fear of the swim leg of triathlons is both humorous and heartfelt – you really feel for him (and laugh at his fear of jellyfish and vicious bears). Murakami’s open admission that his best marathoning days are long passed is impressively honest, but it doesn’t dampen his love of the sport. Reading this book is like reading a book written by you favorite running partner, which is a nice change from some of the other running-related books I have read. In its totality, it’s truly a wonderful book.

I’ll finish this review with a few quotes from the book (it’s filled with many great ones), and the recommendation that this is a book that simply deserves to be read.

And now, in Haruki Murakami’s own words:

“…a person doesn’t become a runner because someone recommends it. People basically become runners because they’re meant to.”

“When you see runners in town it’s easy to distinguish beginners from veterans…the ones with quiet, measured breathing are the veterans. Their hearts, lost in thought, slowly tick away time. When we pass each other on the road, we listen to the rhythm of each other’s breathing, and sense the way the other person is ticking away the moments.”

“I’m me, and at the same time not me. That’s what it felt like. A very still, quiet feeling. The mind wasn’t so important.” – Murakami describing how he felt in the late stages of an Ultramarathon

“Even when I grow old and feeble, when people warn me it’s about time to throw in the towel, I won’t care. As long as my body allows, I’ll keep on running.”

“…I didn’t start running because somebody asked me to become a runner…one day, out of the blue, I started to run-simply because I wanted to.”

“Those of us who participate in triathlons are unusual people…Most all the participants have jobs and families, and on top of taking care of these, they swim and bike and run, training very hard, as part of their ordinary routine…The world, with its commonsensical viewpoint, thinks their lifestyle is peculiar. And it would be hard to argue with anyone who labeled them eccentrics and oddballs. But there’s something we share, not something as exaggerated as solidarity, perhaps, but at least a warm emotion, like a vague, faintly colored mist over a late-spring peak.”

“…for most of the people participating in a triathlon the competitive aspect is less important than the sense of a triathlon as a sort of ceremony by which we can affirm this shared bond.”

“Long distance running (more or less, for better or worse) has molded me into the person I am today, and I’m hoping it will remain a part of my life for as long as possible. I’ll be happy if running and I can grow old together. There may not seem to be much logic to it, but it’s the life I’ve chosen for myself.”

“For a runner like me, what’s really important is reaching the goal I set myself, under my own power. I give it everything I have, endure what needs enduring, and am able, in my own way, to be satisfied.”

Buy this book, read it, and enjoy it.

You just finished reading Running Book Review: What I Talk About When I Talk About Running, by Haruki Murakami! Consider leaving a comment!