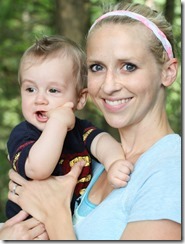 I met Sarah Canney back in August 2012 at a running workshop that I taught along with my friend and co-worker Brett Coapland. At the time, Sarah was 8-months pregnant with her second child, and she’s the first and only near full-term pregnant runner I have ever captured in a slow motion gait video. Sarah had a goal of running a 3:30 marathon the Spring following the birth of her son, but she revised her plans and opted to run the Big Lake Half Marathon in Alton, NH instead due to setbacks encountered in her return to running (she discusses her regrets about her approach to returning to running below).

Sarah left her job teaching high-school English to be a full-time stay-at-home mom in 2012, and she now coaches runners and writes about running and life on her blog, Run Far Girl. She’s also written extensively on her experience of running during pregnancy and post-partum. I’ve long been wanting to publish a post on the topic of running during pregnancy (and for obvious reasons I can’t speak from experience on this one!), and Sarah was thus the first person I thought of to ask about tackling the subject.

Tell us a little bit about yourself and your running history.

I started running shortly after my freshman year of college. I was looking for a way to be active and find a competitive outlet; I had played basketball in high school and at the AAU level. The first race I trained for was the Maine Marathon in 2003. It was a “bucket list” thing. I thought I’d do one and be done (we all know how that goes). In preparation I ran a local 5K and 10K and placed first in my age group in each race. At that point I was hooked.

I didn’t really race or run seriously for about three years from 2007-2010, then re-entered the running scene in 2010 after my daughter Sophia was a year old. I PR’d in every distance in 2010-11 and then ran through my pregnancy with Jack in 2012. Last year and this spring have been my most successful running seasons to date and I have a few overall wins under my belt now. 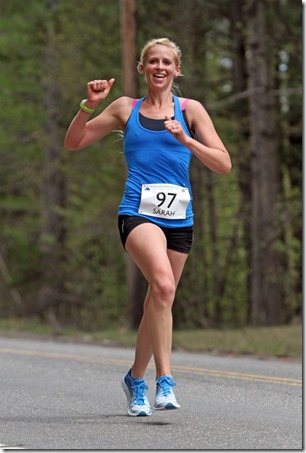 You have two children – did you run through both pregnancies?

I do have two little ones, Sophia is 4 and Jack is 22 months.

During my first pregnancy I ran very little. I was just coming off a time (two years) of not racing or running more than three or four miles at a time. During my pregnancy I mostly used the elliptical and did weight training. I ran up until about seven months, while pregnant with Sophia, but never more than three miles.

With Jack things were different. The year prior to my pregnancy with him I had started training more seriously and had just PR’d in the marathon with a time of 3:48. Nothing stellar, but after a few disappointing races I was pleased with my time and was eager to train for a Boston qualifying time (Sarah earned her BQ in May of this year). When I found out I was pregnant with Jack I was running about 40-45 miles a week. My mileage immediately dropped to about 25-30 miles a week as I battled nausea and general fatigue that comes with early pregnancy.

For most of my pregnancy with Jack my mileage hovered around 25-30 miles a week. I also ran a few races while pregnant: a 5K at 16 weeks, a half marathon at 21 weeks, a 5 miler at 26 weeks and another 5K at 28 weeks. My last run was a four mile run three days before Jack’s due date.

I will add though, that after my pregnancy with Sophia I noticed that I leaked on occasion while I ran–something I’d never experienced before. This slowly went away after about a year. But it immediately returned when I started running during my pregnancy with Jack. The incontinence was due to a weakened pelvic floor (which I didn’t know about at the time) and laxity in the muscles due to hormonal changes.

In your personal experience, what was the hardest part about running during pregnancy?

I think the hardest part of running through pregnancy is learning to listen to and adapt to your bodies’ limitations. One of the first things I noticed early on in pregnancy was an increased shortness of breath. It can feel frustrating early on in pregnancy, especially in the first few weeks when nothing else has really changed, to feel completely out of breath at a pace that would normally be easy.

As pregnancy progresses running becomes more uncomfortable. And probably the biggest annoyance is that feeling of constantly having to use the bathroom. But that’s pretty much par for the course for every pregnant woman, not just those who run. 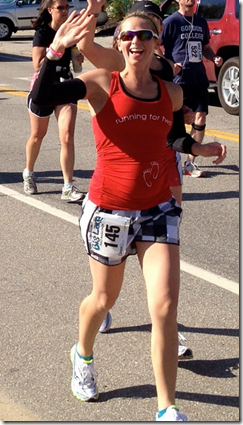 You wrote a post titled “I wish I hadn’t run during pregnancy.” Can you explain why?

I was very eager to return to running after Jack’s birth in September, 2012. My goal was to run a spring marathon and BQ. I ran during my pregnancy with him in hopes of maintaining some sort of fitness (also because running is an outlet for stress and is really my “me” time), so that a return to training postpartum would be (in theory) less difficult.

My first run after having Jack was at three weeks postpartum. I felt good and had been given the OK by my midwife to go for a run. The run was a success (and by that I mean there was no leaking). I ran the next day and continued to run the remainder of the week. By the fourth or fifth day I had a feeling of laxity in the pelvic area and was experiencing leaking/incontinence. At that point I realized I’d done too much too soon.

When I returned to my midwife she recommended I see a women’s health physical therapist. After my initial assessment I realized that if I hadn’t stopped when I did, I could have done quite a bit of damage (possibly a prolapsed bladder requiring surgery). I took four weeks completely off from running and spent those weeks in physical therapy. I didn’t really return to running until about 12 weeks postpartum. And at that point my physical therapist advised me against marathon training.

My pelvic floor wasn’t strong enough or recovered enough to run in the way that I wanted to run–which was frustrating. But after that initial assessment and conversation with the physical therapist I realized that I really had been uneducated about the risk of prolapse and the importance of pelvic floor, hip and core strength when it comes to running during pregnancy. I think that often runners assume that we are in great shape because we can bang out a ten mile run. What I realized is that there were areas of weakness and imbalance in my body that had been severely strained as I ran through pregnancy.

For a pregnant woman (especially one who already has children) time and energy are limited; I wish I had focused more of my time and energy on strengthening my body and using pregnancy as a chance to focus on correcting weakness and imbalance rather than simply running.

If you had to give advice on running to other women who are pregnant or are planning on trying to have children, what would be the key things you would suggest they consider?

I think the most important thing is to be assessed by a physical therapist who specializes in women’s health. In many instances (at least this is my personal experience and the feedback I’ve received from many readers) doctors and midwives aren’t always up to date on the latest information regarding pelvic floor health as it relates to running during pregnancy. An assessment by a PT can yield a lot of helpful information regarding weakness and imbalance that may be exacerbated by running during pregnancy. The more you can prevent the better.

I’ve had hundreds of comments on my post; a large majority are from women who have not been able to return to running after pregnancy–and this is after physical therapy and often surgery. It seems to me that there is a growing trend of the “uber fit” pregnancy. It’s a trend that can lead to women feeling pressure to stay active even if their body or doctor is telling them otherwise. I would encourage women to be informed about their own bodies and to not buy-in to fear of losing fitness. Yes, there will be fitness loss, but ultimately you want to be in a place postpartum where you can solidly begin building your fitness. You don’t want to have to deal with setbacks where you’re in PT because you did too much too late into your pregnancy or too much too soon after your delivery.

How about post-partum running? What were the biggest challenges, and what advice do you have for others?

I think the biggest challenge is holding back.

In my opinion it is important to wait the six weeks that doctors traditionally advise. After speaking with my physical therapist she outlined what happens with the muscles, fascia and tissue during that time. That six week recommendation is not antiquated – it is necessary to allow your body to recover. It can be frustrating to feel “ready” to run; but know that on a cellular level things still need time to strengthen and rebuild.

I would advise not setting any time sensitive running goals until after that six week period. And even then I’ve noticed that I don’t fully feel myself until about 9 to 12 months postpartum. And of course every woman is different, be aware of what your needs are and don’t compare yourself with what others have done. 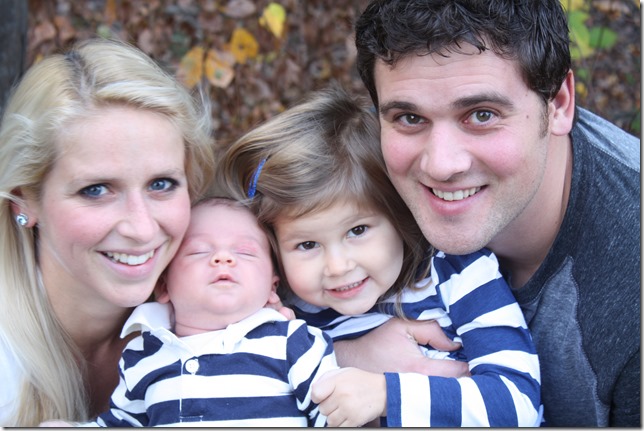 If I were to go through it all again, I probably would run during pregnancy. As most runners know, it’s hard to live without running. I would say even more so now as a mom than before: I need that me-time. However, I would approach it very differently.

I think I’d approach running during pregnancy as a chance to work on areas where I was weak. I’d maybe focus on form drills, core and hip strength and other elements that can still improve my running without me actually running. And maybe I’d run less often and try to incorporate complementary activities like spinning. And I’d probably stop when running became uncomfortable, rather than pushing through later and later into the pregnancy.

My return to running would also look very different. It would probably start with a postpartum PT assessment, that way I’d be informed of my bodies’ current weaknesses and be able to plan my return to running accordingly. And I’d try not to feel like I had something to prove, bringing life into this world is a pretty substantial feat in and of itself.

For more from Sarah Canney, check out her blog Run Far Girl.