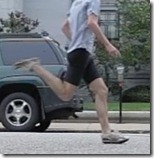 In my previous post I shared some slow motion video of runners from the 2010 Boston Marathon, highlighting a bit of the variation that can be seen among fairly high level marathon runners. In this post I wanted to share similar video from a recreational level 5K race. These videos were all shot at roughly the mile 3 marker on a flat to slight downhill grade – I have intentionally cropped out upper bodies to remove identities of runners. The first video shows the form of 4 of the fastest runners in the race (all ran sub-17:00, a few sub-16:00). All videos are best if viewed full-screen.

Next is a sampling of typical middle of the pack runners, and so provides a useful reference for what the average runner does out on the road (unfortunately, no barefoot runners that I can find among the thousands that ran this race).

Next, here is a nice series showing the all too common overstriding running form seen among runners in general – watch for the reach with the lower leg and the extended knee (I haven’t quantified it, but this is probably the most common form variant that I see in recreational runners; best if viewed full-screen):

Finally, here is an individual running the race in Vibram Fivefingers – form is pretty typical of most of those who wore Fivefingers in the race, though a few forefoot strikers were also seen. Just goes to show that simply putting on a pair of minimalist shoes may not cause you to immediately kick your heel strike. However, the individual does not seem to be reaching with the lower leg, so I would not call this an overstride: