In early November I wrote a post in which I recommended gear for running at night, and one of the items I discussed was the (original) Petzl Tikka Plus 4-LED headlamp (there is a newer single-LED Petzl Tikka Plus 2 out now that is rated a bit brighter).  The Tikka Plus is a nice, inexpensive, lightweight headlamp that provides just enough light for running on roads/sidewalks at night.  However, in the review I indicated that I wasn’t sure how effective it would be for trail running since it only produces a maximum brightness of about 35 lumens.  Sure it could be brighter, but it’s worked for me so far this winter, and I haven’t had any major complaints about the Tikka Plus.

Sometimes you don’t know what you’ve been missing until you try something different, and that was my experience after going for my first run in the Black Diamond Sprinter – a headlamp that seems to have been made specifically for runners.  A few weeks ago I was contacted by a marketing representative for a number of outdoor product manufacturers inquiring about whether I would be interested in reviewing a few products that would be suitable for winter running.  Since I live in the middle of New Hampshire, winter running is a fact of life, and I gladly accepted the offer.  So, in the interest of full disclosure, I will say that I received this headlamp free of charge, but am receiving no other form of compensation for writing this review. 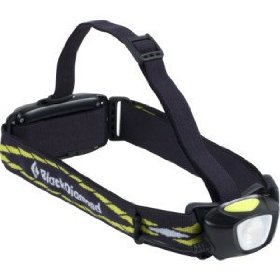 The Black Diamond Sprinter headlamp trumps the Petzl Tikka Plus on a number of important points.  First, it provides a maximum brightness of 68 lumens, and this was immediately apparent after going for my first night run in it earlier this evening – the Sprinter illuminated the road much more brightly than the Tikka Plus, making it easier to see what lay ahead of me on ground.  I haven’t taken it on a trail, so I’ll reserve comment on that for an update at a later date, but my sense is that this headlamp would work fine for most trail-running situations.  Another feature of the lamp itself that I like is that it swivels smoothly up and down, whereas the Tikka Plus has a clicking mechanism that is a bit more restrictive from a positioning standpoint.  Simply stated, the Sprinter is very bright, and it should easily handle most night running situations.

From a safety standpoint, a second nice feature found on the Sprinter that is not present on the Tikka Plus is a red blinking LED on the rear portion of the headband.  This LED is integrated into the battery compartment, and sits on the back of your head when you wear it.  In combination with my reflective Amphipod Xinglet, this makes me even harder to miss by cars approaching from behind.  If you’re not crazy about the idea of having a red blinking light on the back of your head, this LED can be shut off independently of the forward facing lamp.

The third feature that really cements the Sprinter as a superior headlamp to the Tikka Plus is the fact that the battery pack is rechargeable – it doesn’t require disposable batteries.  The Sprinter comes with a docking station the the battery pack clicks into, and mine was fully charged out of the package in a matter of a few hours.  For those of you living outside of the US, the charger also comes with swappable outlet adapters suitable for a variety of types of wall outlets.

In terms of appearance, my opinion is that a headlamp is pretty much a headlamp, and the Sprinter looks just about like any other I’ve seen.  It comes in two styles (I have the yellow/black one), and unlike the Tikka Plus, the Sprinter includes an additional, adjustable band that loops over the top of your head for added support.

Finally, this review would be incomplete if I didn’t at least mention a few of the potential cons of the Black Diamond Sprinter when compared to the Petzl Tikka Plus. First, there is the added weight of a battery pack on the back of the Sprinter’s headband, though it is thin and lightweight, and I barely noticed it while running.  In my opinion, the benefit of having rechargeable batteries and a docking station outweighs any potential problems with added weight and/or discomfort.  Second, the price of the Black Diamond Sprinter is about $40-$45 more than the Petzl Tikka Plus.  I may be a bit unfair in comparing these two headlamps since the Tikka Plus is clearly in a lower price range, but they are the two that I have so that’s what I’ve got to work with.  There are other Petzl headlmaps that might be more comparable, but I’m quite happy with the Black Diamond Sprinter, and the added brightness and safety features make the added cost well worth it to me. I’ll still hang onto the Tikka Plus – its a bit easier to stuff in a pocket if I go for a run at dusk and don’t need a lamp right away, but for runs fully in the dark, the Black Diamond Sprinter will be my new go-to headlamp.

For more information about the Sprinter, check out the product page at the Black Diamond website.