Running History: Arthur Newton on Pacing in Training vs. Races (1935)

As Caleb Masland pointed out yesterday in his post on varying pacing in workouts, many runners tend to run too fast, too often in their training. This can lead to burnout and eventual injury. Caleb discussed how and why elites vary their training paces across a broad range, and how, in contrast, amateur runners often run most of their miles at a single pace (or vary paces over a much narrower range). Often this pace is unnecessarily quick.

One of my favorite running books is aptly titled “Running.” It was written by legendary ultrarunner Arthur Newton back in 1935, and it’s full of excellent advice that holds true even today. Newton started running seriously in his late 30’s, and routinely ran 500-700 miles or more per month. On a few occasions he ran over 1000 miles in a month, and during his career he set records at multiple ultra-length distances. He was also an experimenter and had a way with words that makes reading his book a joy – it feels like you’re chatting with a running partner over a beer. And despite the book being almost 80 years old, his advice for the most part holds up very well (he even devotes an entire chapter to the topic of why runners shouldn’t smoke!). 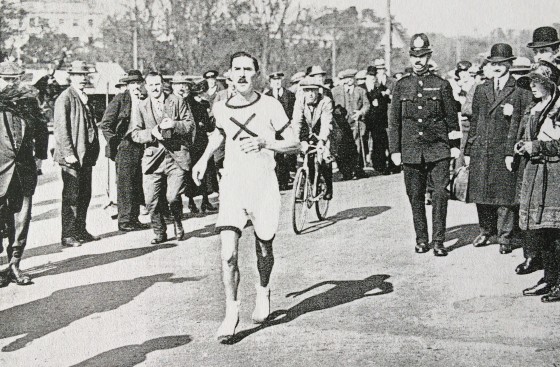 Arthur Newton; Image is from his book titled “Running” (1935)

A lot of the advice that coaches and experienced runners give out now has been part of running lore for a long time. In order to present a historical viewpoint on the topic, I thought I’d follow up on Caleb’s post with a few passages on pacing from Arthur Newton’s book:

“There is one rule that I have strictly adhered to for many years. I have not seen it advocated before, but my experience proves it to be thoroughly sound – never race until you must; always practise at an average of some 20 per cent or 25 per cent. below the speed you actually can travel if put to it. It may take longer and be more laborious to train thus, though I doubt it, but it is infinitely safer…”

“…I do not believe in trying to race during practice. Racing is abnormal; no wild animals ever seriously indulge until they are forced to by fright, yet they are faster than tame beasts. There are other reasons too. Running will, as you know, strengthen and develop your heart, lungs, legs, back, mind and other odds and ends. If you try to force development there will be strikes or rumours of strikes all around, and consequently, to use a very mild term for it, discomfort.”

Regarding his own approach to pacing in ultramarathon training (I love his concept of what constitutes a “jaunt”!):

“For practice jaunts of from thirty to fifty miles I rarely averaged as much as seven miles an hour, not including stops for meals or refreshments; for twenty to thirty milers about 6 3/4 to 7 1/4; from ten to twenty, something in the region of 7 1/2 to 8 1/2 m.p.h. Of course, I knew from experience that I could go faster but had learnt decisively that it would be a mistake. When it came to the fifty-two mile race I averaged eight and nine-tenths miles per hour and arrived at the finish quite reasonably fit – pretty sound proof of the value of these methods of training…”

“If a man on the wrong side of forty can manage this little lot without any ill effects, don’t you think a younger fellow – yourself for instance – could do better if he stuck to similar principles? There can be no doubt about it. So once more I will emphasise – all your practice should be done at a speed considerably below your racing ability. I am convinced that you will do less well if you fail to observe this.”

If I apply Newton’s advice to my own training, it turns out to be quite accurate. My 5K race pace is just above 6:00/mile, and 25% slower than that would be about 7:30/mile. If you plug my most recent 5K time into the Daniels Running Calculator, it predicts an easy pace range of 7:49-8:18/mile, which is probably the pace range for most of the miles that I run these days.

It wasn’t always like that – in my first few years of running I would frequently try to run my usual 5-mile route faster than the previous time I had run it each time out. I ran way too many miles at a near all-out effort for that distance. Nowadays I run my hard workouts hard (I might get down to sub-6:00 pace during repetitions), and my easy workouts easy. For easy workouts and long runs my average pace is typically in the range of 7:30-8:30/mile (varies depending on how I feel on a given day), and my first mile is typically a warmup and is often closer to 9:00. I’ll even still take walk breaks on runs if I feel it’s needed due to heat or if I’m having a particularly rough day – interestingly, Arthur Newton would typically log 150-300 miles walking each month in addition to his ridiculous running tallies.

So the point here is that advice to approach pacing wisely in your training has a lot of collective history among coaches and runners to back it up. It’s ok to run fast in training, but don’t make every training run a race. Mix things up, you’ll be better for it.