Running in Heels: My Strategy to Overcome Injury 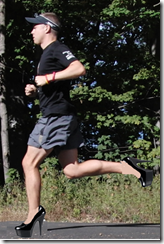 I have a confession to make. I ran in heels. I did it on purpose. And it worked (I think).

I’ve written a few times in the past week about how I strained something in my foot during the Manchester City Marathon. It had sidelined me for 5 days, and then flared up again on Saturday during my first run back. Through a combination of me knowing a thing or two about anatomy and a little Google medical sleuthing, I determined that the problem seemed to be some inflammation in the peroeus longus tendon which extends under the outside of the ankle and then curls under the sole from about midfoot toward the big toe. I mentioned this in a post on Twitter, and someone responded that a similar thing had happened to them and that running in a shoe with a bit of heel lift had helped during recovery.

In thinking about the Twitter response, I realized that I should have thought of the idea myself. Recently I wrote a post on repetitive overuse injuries in runners, and made the point that one of the things I try to do to avoid injury is rotate among shoes of varying properties. If something is bothering me in a particular shoe, I shelve it for a bit and try something else. Often, this clears up the problem and allows me to keep on running.

Not being one to hold off on trying something out (especially if it would let me run, which I desperately wanted to do), I decided that I would do a short run today in a pair of Mizuno Wave Ronin’s that have been feeling a bit neglected. The Ronin is a nice looking shoe (and no, it’s not the one in the picture at the top of the post – a friend photoshopped that piece of work for me as a joke), and fits about as well as any shoe that I have (very wide in the forefoot). However, the Ronin has a 9mm heel lift, which is above my threshold if I want to avoid a heel strike. The vast majority of my runs in the past year have been in shoes with a 6mm lift or less, so this shoe is structurally a lot different than what I’m used to. Thus, my hope was that it would alter the stress application on my foot in a way that might allow me to run without pain.

I left the house tentatively, planning to cut the run short at the slightest twinge of discomfort. It never came. I picked up the pace, and the foot still felt good. I eventually got to the point where I was running a sub-6:00 pace for a bit (not smart, but couldn’t resist) and wound up completing the 2.5 mile run at an average pace of just over 7:00/mile. I’m still aware that there is something “off” in my left foot, but it never hurt during the run, and I couldn’t be happier. I have no plans of going back to “high-heeled” shoes, but at least on this day, the Ronin, which actually has a lower heel than most training shoes out there (9mm vs. 12mm for most), served me very well. I’ll probably split the next several runs between the Ronin and the Brooks Launch, and re-evaluate my foot condition before getting back into my more typical shoes.

So what’s the point of all of this? Well, I guess it’s that I don’t want to ever come off as being dogmatic or stubborn when it comes to choosing a running shoe on a given day. Sometimes a bit of heel can be a help rather than a hindrance, and if wearing a shoe that doesn’t fit my normal preference allows me to run when I might otherwise not be able to, then so be it. Ultimately, shoes are simply tools that help us (in most cases) to participate in the sport we love, and that’s really what’s most important, isn’t it?

You just finished reading Running in Heels: My Strategy to Overcome Injury! Consider leaving a comment!