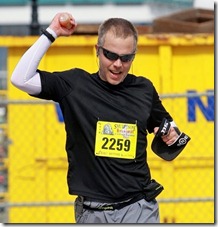 It’s been awhile since I’ve written a post about my own running, and since this is and always will be a personal blog, I thought I’d take a few moments to share something I’ve learned over the past nine months.

I was listening to an NPR podcast interview with New York Times Phys Ed columnist Gretchen Reynolds this past weekend, and in it she mentioned something along the lines of how being a fitness writer is one of the worst things to be if you want to maintain good health. Her point was basically that as a writer she winds up sitting almost all day, and that sitting really isn’t very good for you.

Last Fall I heard about the same thing from Christopher McDougall. We were chatting at an event prior to the Manchester City Marathon here in NH and he commented on how much his health and fitness had fallen apart while he was writing Born to Run. He really emphasized that he has learned that it’s really important to just put everything down for a short time every day in order to get some exercise. Good advice, but it’s advice that I must admit to not having followed for the past year or so since running Boston 2012.

I’ve now come to realize the wisdom of what Reynolds and McDougall were saying – writing a book about running was about the worst thing I could have done for my running. As much as I might have wanted to get out and run every day, the book and the demands of my day job were always hanging over me, and conspired to limit my running to just 2-3 days of maintenance miles per week for much of the Fall and Winter. My mileage was shot – in fact, there were a few weeks where I did not run at all (gasp!). My general health suffered as stress and deadlines began to overtake my life. When I did get out for runs, which often took a lot of mental effort, my body felt sluggish and things just didn’t feel right. There were a lot of days where running was really the last thing I wanted to do.

It’s funny how quickly things can change. My spring semester ended about three weeks ago, and with the end of teaching came free time for running, and I’ve now strung together three pretty solid weeks of decent mileage and a variety of workouts (hills, intervals, etc.). Interestingly, now that I’m once again running almost every day, I’m finding that my passion for the sport has returned full force, and it’s become very hard to take a day off (even when I know I need one). With the added mileage, I actually feel like my body handles the stress of running better, and my legs have regained some of their pop. I feel like a real runner again.

I’ve come to be a believer that regular activity is really necessary for the body to thrive. Exercising just two or three times a week doesn’t cut it for me – if I go three or four days between runs my body tightens up, the sluggishness kicks back in, and the mental effort required to get out the door grows exponentially. There is a fine line to walk though, as I also believe that overtraining for one’s current level of fitness and adaptation is the primary cause of injury. Finding a balance is the key – doing enough to stay fresh and keep the passion for the sport stoked, but not so much that you start to break down. This is the balance I’m trying to find right now – my body now wants to run, as does my mind, but the sensible part of me knows that I need to proceed carefully as I attempt to get back into racing shape and re-discover that guy in the photo at the top of this page. It’ll be a fun challenge – a Fall marathon is calling!