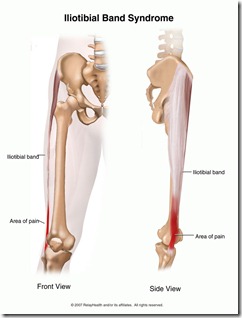 A few weeks ago I received an email from a reader named Adam Krueger asking me if it was possible that a simple change in footwear from a stability shoe to a neutral trainer could essentially cure a fairly long-term bout with iliotibial band syndrome virtually overnight. This had been Adam’s experience, and he was wondering if I had ever heard of such a thing before.

My immediate answer was a resounding yes. Why? Because in my own life I have experienced bouts of ITB pain only twice, and in both instances the pain above the outside of my knee resolved almost immediately either with a change in footwear or with a modification to the footwear causing the problem (you can read about my experience with the latter here).

Now, I’m by no means saying that changing footwear is a surefire cure for ITBS – I highly doubt that it is, but given my experience it is one factor to consider (along with things like hip strength, asymmetries, etc.). But, I was intrigued by the similarity between Adam’s experience and my own, so I asked if he’d be willing to write-up his experience for me so I could share here on Runblogger.

If you’ve been a runner for a number of years, it’s likely you’ve suffered from some type of running-related injury. Among the most common of running injuries is Iliotibial (IT) Band Syndrome. It can happen for any number of reasons including: poor running form, overtraining, running too many hills and on and on. As far as injuries go, ITBS can be one of the most frustrating because it can take anywhere from a few days to a few months to clear up. This is the story of my struggle with ITBS and its seemingly unlikely resolution.

Back in January of this year I began training for the NYRR Half Marathon in New York City which took place this past weekend. I had been running regularly for the previous two years and was typically logging 80-100 mile months and was looking forward to the challenge of my first race longer than a 10K. At the time I was in the midst of reading ‘Daniels’ Running Formula’ (by Jack Daniels) and was feeling extra ambitious, so I formulated my own training program which was based off of one of his marathon training programs in the book. I modified the mileage a bit because I was only going to run a half, but I tried to stick to his principles of many long and slow miles highlighted by a speed (he calls them “quality”) workout or long run twice per week.

For the first month of training, everything was going swimmingly and I was averaging just over 30 miles/week. It was during the first week of February that I started noticing a pain on the outside of my left knee. At first I thought I had just bruised my knee because the pain, while noticeable, was more of an ache than something that felt serious – and it seemed to disappear after I stopped running. After a couple of days of that, I had a speed workout scheduled and that’s when things really got bad. After completing that workout I had sharp, stabbing pain in my left knee and could barely put any weight on my left leg. Walking down flights of stairs was terrible. I did some quick research on the internet and it became pretty obvious that I had developed a case of ITBS. I was in denial. I said to myself, “eh, I’ll take the next few days off, let this clear up and I’ll be back on my way.” Little did I know I would spend the next 6 weeks in pain.

After the denial-phase, I started trying different things. I started icing my knee twice a day and taking an ibuprofen regimen. I purchased a foam-roller and started rolling 2-3 times a day. I started doing several different leg-strengthening exercises specifically targeting my hip abductors, hamstrings, quads and calves. To compensate for not being able to run I did some pool running, biking and swimming. For the first couple of weeks, I would “test out” my legs every few days and every time I would make it between 1 and 2 miles before the pain returned, often reaching a severe level before I would shut it down feeling frustrated and defeated. After those first few weeks, I decided to incorporate rest into the mix and a couple of times went a week to 10 days without running at all. After resting for a week or more my legs would feel great with no pain at all and I would start to get excited. Then I would strap on my shoes, try to go for a run and between miles 1 and 2 the pain would start in again, inevitably causing me to cut my run short. As the race got closer and closer, I got more and more desperate. I purchased the Patt Strap, I purchased the Mueller Max Strap, I bought a new pair of shoes, I bought “The Stick”, I went and saw a physical therapist who recommended arch-support inserts which I ended up getting. Nothing I was trying was making any difference. Every time I would go out of a run the pain would start in again. About a week before the race I was telling my mom about it and I said to her, “it’ll be a miracle if I am able to run the race.”

Five days before the race it was sunny and 70 degrees here in Chicago and if you’re from this area, you know how rare that is for March. I got home from work and I was DYING to go for a run. As I was sitting in front of my closet putting my socks on, I noticed an old pair of running shoes towards the back of my closet, a pair of Saucony Ride 2s that I had retired last November. I had since switched to the Saucony Guide 5s last December after visiting a running store and being told I needed a support shoe due to over-pronation. I had been switching between the Guide 5s and a pair of Brooks’ Green Silence for quicker runs. I saw the shoes sitting there, lonely, in the back of my closet, and thought to myself, “what the hell, I’ve tried everything else, I might as well see if a different shoe changes anything.” I loved the Ride 2s. I never had any injuries while running in them and had retired two pairs before switching. Those shoes made a WORLD of difference. I completed a 3.6 mile run that evening and when I got back to the house, I called my wife, my friends and my brother (all runners) to tell them the great news. A couple of days later I had another pain-free 3-mile run and was willing to give the Half Marathon a shot…I hadn’t run more than ~3.5 miles at a time in 6 weeks, but I so badly wanted to run this race.

During the half marathon I had some discomfort in the knee that started between miles 4 and 5 but it never rose to the level of “pain” and I was able to complete the NYC Half in 1:45:02. I’m not a crier, but I started crying after I crossed the finish line. I had all but given up hope that I was going to be able to run the race, let alone complete my first half marathon in a respectable time. At this point, I am convinced that a shoe-change played a large role in the development of my ITBS. It didn’t occur to me right away because I’d run 100+ miles in the new pair before the onset of the ITBS symptoms. To all you ITBS sufferers out there – I feel your pain! Though shoes may not be able to prevent injury, it seems more than possible that they can cause an injury if you choose the wrong ones.

If you’ve had a similar experience, we’d love to hear about it in the comments!