Home / Blog Posts / Running Speed: Human Variability and The Importance of Both Cadence an

Running Speed: Human Variability and The Importance of Both Cadence and Stride Length 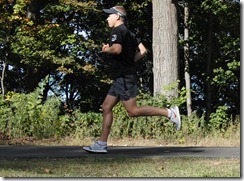 Over the past week a few posts have popped up on blogs that I frequent regarding the topic of running cadence/stride rate. First, Alex Hutchinson at Sweat Science put up a post titled “The problem with 180 strides per minute: some personal data.” In his post Alex shares some personal data on cadence, and emphasizes that the oft repeated ideal of 180 strides per minute makes no sense since cadence changes with running speed (and I agree). He concludes by saying the following:

“Of course, this doesn’t mean I don’t think stride rate is important. I definitely agree with those who suggest that overstriding is probably the most widespread and easily addressed problem among recreational runners. But rather than aspiring to a magical 180 threshold, I agree with Wisconsin researcher Bryan Heiderscheit, whose studies suggest that increasing your cadence by 5-10% (if you suspect you may be overstriding) is the way to go.”

Alex pretty much sums up my feelings on cadence, and I absolutely agree that 180 need not be some magic number that all runners need to shoot for. In a previous post here on Runblogger I wrote the following:

One often hears the magic number of 180 strides per minute thrown around these days as being the optimal cadence for a runner… I believe this number can be traced back to famed coach Dr. Jack Daniels observation that elite runners tend to run at a stride rate of 180-200 steps/minute. I’m not sure that we have any conclusive data saying that the 180 number is optimal for every person, but Heiderscheit et al. 2011 showed that running with a faster cadence/higher stride rate (5-10% increase) reduced loading on the knee and hip, allowed for a more level carriage of the center of mass (less vertical oscillation), shortened stride length, and created less braking impulse (read my post on the Heiderscheit paper here). All seem like reasonably positive outcomes if you ask me, and this paper might be a useful guide in that a mere 5% increase in you cadence might be all that is necessary to realize some benefit. It turns out that the 170-190 range would probably be where most people would land if they increased cadence by 5-10%.

Shortly after Alex’s post was published, Peter Vigneron put up a post on the topic on the Outside Blog titled Does Form Matter? (continued) – Peter is a former editor for Runner’s World and he wrote the story on running form that appeared in the June issue of RW. In his Outside post, Peter says the following:

But as journalist, physicist, and former elite runner Alex Hutchinson notes, the 180-strides-per-minute benchmark isn’t all it’s cracked up to be. There are serious problems with Daniels’s observations (among them, a small sample size and no analysis of stride length plotted against speed), and other research has contradicted some of its conclusions. More likely, Hutchinson writes, runners play with both stride length and stride frequency when they run, and 180 makes sense at some speeds and not at others. Blogger and Nike coach Steve Magness has made similar observations.

Why is this important? In reporting of the form story, the 180-strides-per-minute rule came up as one of the few objective measures of good form. Nobody said it was the most important measure—if good form exists, it probably has more to do with dorsiflexion angles and knee position at ground contact—but for runners to change form, it helps to know what to aim for. And it’s much easier to count strides than it is to measure dorsiflexion angles, never mind figure out what dorsiflexion means.

Given all of this talk about cadence, I couldn’t help but conduct another experiment on myself. Earlier today I went for a 7 mile run with my Wahoo Fitness footpod stride sensor linked up to my Garmin 305 GPS watch. I ran paces ranging from 10:00+/mile down to sub-5:00/mile, and attempted to hold pace as steady as possible for at least 0.2 miles at each speed. After the run I uploaded the Garmin data to SportTracks, and exported my 100 meter splits for the full seven miles into Microsoft Excel (data for each 100m split included time, speed, and avg. stride rate). Using a little Excel magic, I calculated the exact number of steps and strides taken during each split, and used that value to calculate avg. stride length by dividing 100m by the number of strides taken during that split. 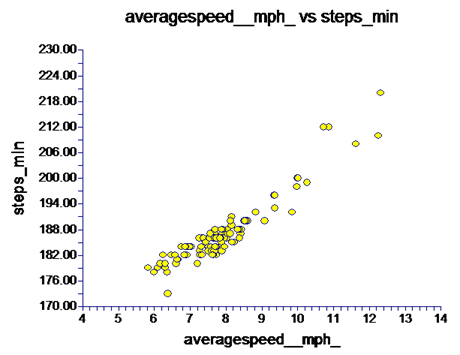 It might be tempting to look at the above graph and conclude that I increase my speed solely by increasing my cadence. Not so fast. Next is a graph that I found really interesting. This one shows the number of steps taken per 100 meter split: 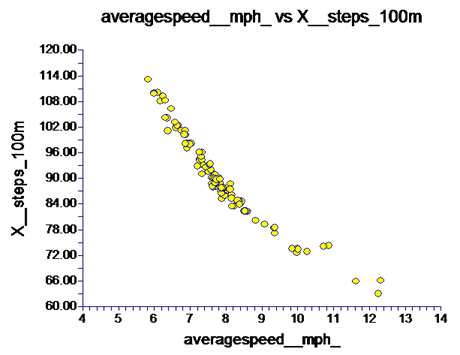 What this shows is that although my cadence increases as I speed up, the number of steps that I actually take per 100m declines dramatically. The reason for this is that at my fastest pace I covered the 100m in less than half the time (18.2 sec) it took me to cover the same distance at my slowest pace (38.5 sec). It took me 113 steps to cover 100m at a 10:18 min/mile pace, but only 66 at a 4:52 min/mile pace. In other words, I took a bit over half as many steps to run 100m at double the speed.

To avoid confusion before moving on, it’s important to note that a step is technically defined as the period from landing of one foot to landing of the opposite foot, whereas a stride is the period from landing of one foot to the next landing of the same foot – we typically report cadence in steps/min, but length is typically reported as stride length.  Since speed is a function of cadence and stride length, then I had to have been taking longer strides as I increased my speed in order to cover the same 100m distance in fewer steps. Given that I know how many strides I took per 100m, I can put some numbers on this – here’s my stride length (in meters) compared to speed: 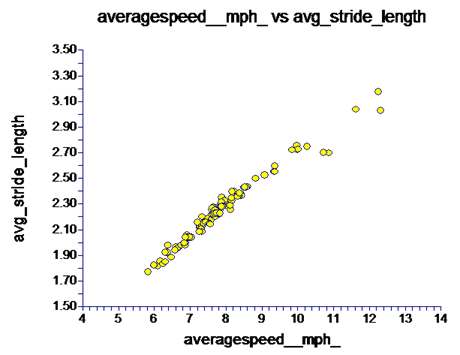 What you can see here is that as I speed up, my stride length increases dramatically – from 1.77m at slowest pace, to 3.03m at fastest pace, an increase of 71%. Thus, although the absolute number of steps that I take per 100m declines as I run faster, but my speed overall increases because my cadence increases by about 13%, my stride length increases by 71%. These numbers show that upping both cadence and stride length are critical for me to increase speed, but stride length appears to be the bigger contributor. This is what I expected, as my sense is that I tend to modulate stride length moreso than my cadence in order to control my speed – my cadence stays fairly steady on most runs over a range of easy paces (for example, below is a plot from a very easy trail run I did yesterday showing cadence in green and pace in blue – click for a larger view). 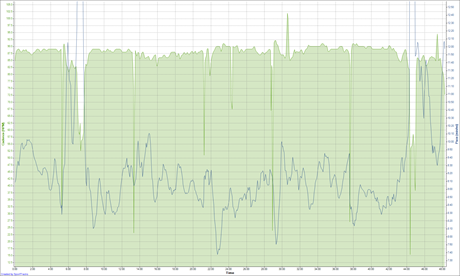 What I also find interesting is the comparison of my numbers to those posted by Alex Hutchinson. For a given speed, my cadence is considerably higher than Alex’s, but my stride length is shorter – another great example about how individuals can take different approaches to accomplishing the same result (in this case, speed). Alex is a much faster runner than I am (he’s a former elite), and I also suspect a lot lighter, so I’m curious how those factors might play a role. I’m also curious whether my own data might be influenced by shoe weight – I ran today in a very lightweight shoe, and I’m tempted to try the same with something double or triple the weight just for kicks and see if the results vary.

I think perhaps the biggest take home message here is that stride rate can and does vary considerably with speed, and also between individuals. The 180 number gets thrown around a lot, but I see no reason why this number need be the gold standard that everyone should shoot for. For me, it’s actually a bit lower than my “easy pace” cadence, and for Alex it’s quite a bit higher. I prefer the 5-10% rule myself – if you are an overstrider, consider upping your cadence by 5% from your easy pace baseline, and realize that that number will change with speed. If you need a bit more, consider 10%. But, like so many aspects of running form, we have little concrete and direct data that changing cadence will prevent injuries. Indirect evidence on joint loading reduction are tantalizing, and anecdotal evidence abounds, but realize that much work remains to be done before any firm conclusions on cost vs. benefit of cadence change can be made.

For any data junkies who might be interested in playing with the raw numbers, I just posted the data for my seven mile run as a Google spreadsheet here. You should be able to cut and paste this into most spreadsheet programs without messing with the formatting.

You just finished reading Running Speed: Human Variability and The Importance of Both Cadence and Stride Length! Consider leaving a comment!