Running the Relay for Life: Recap

I honestly had no plans of running a spring marathon this year – didn’t take long for that resolution to go out the window. On Friday night, an evening that started at dusk with me running alone in heavy rain and ended with four of my students running under a bright blue sky, I managed to run 28.56 miles in 12 hours for the Relay for Life. I didn’t do it continuously, but rather in small chunks of laps around our 0.275 mile college quad. And I didn’t do it alone – it was the support of my students and friends (both on-line and in person), and my recognition of the meaning of the event, that got me through what might outwardly seem like it should have been a monumentally tedious task.

I’ll start out by saying that this distance was not something I had trained for, nor was it something that I had any intention of doing until 2 days beforehand. To be completely honest, my training in the past 3 months has not included a single run longer than 11 miles, and thus, I was by no means in marathon shape. That being said, I’m a believer that when you put your mind to a task, any goal can be accomplished, and in completing this run I came away prouder of myself than after any other run I have done. Simply stated, it was an unforgettable night.

As I outlined in my previous post on this blog, every year, the students, faculty, and staff at my college (Saint Anselm College in Manchester, NH) participate in the Relay for Life to raise money for the American Cancer Society. If you’re not familiar with the Relay for Life, here’s a brief description from the Relay for Life website:

“The American Cancer Society Relay For Life is a life-changing event that gives everyone in communities across the globe a chance to celebrate the lives of people who have battled cancer, remember loved ones lost, and fight back against the disease. At Relay, teams of people camp out at a local high school, park, or fairground and take turns walking or running around a track or path. Each team is asked to have a representative on the track at all times during the event. Because cancer never sleeps, Relays are overnight events up to 24 hours in length.“

Historically, the Relay for Life has been a walking event only at my college, but a few months ago I came up with the idea to try to incorporate a running event as well. The event ran from 7:00 PM on Friday, until 7:00 AM on Saturday, and the plan was to have at least one runner continuously circling the quad for the entire duration of those 12 hours. This had never been done before at our college, and initially I had some concerns that I wouldn’t be able to find enough people to fill the time. Fortunately, during the final week leading up to the Relay, runners started signing up at a rapid clip, and I went into the night with all 24 half-hour time slots covered. 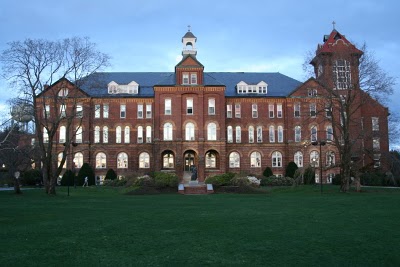 Student (tiny, on left side) running past Alumni Hall at the West end of the Saint Anselm College quad.

The event started in our college’s gym, with an emotional ceremony featuring several speakers who discussed their personal stories of battling cancer, whether it be their own or that of a friend or family member. It was absolutely amazing to see so many of my students (500+ people participated, and our student body numbers only about 2000) out on a Friday night, giving their time to a cause that is so important. The gym was filled with tents, couches, bed, food, music, and a buzz of excitement for what was to come, and I cut out just before the ceremony ended to make sure I was in place to kick things off outside (I did make it back to the gym a few times to refuel – the Luminaria ceremony was amazing and incredibly emotional).

The run started with me, by myself, in cold, hard rain running 10 laps around the quad. I was a bit worried that the rain might cause people to not show up, but I was quickly reassured when one of my students came by at about 7:20 and started getting ready to run. She’s a varsity basketball player at our college, and she was shortly joined by a teammate who is also one of my research students. I ran with them for quite awhile, and a third basketballer joined in, and my initial apprehension turned into pride that I have students who are willing to give their time, in the rain, for an event like this. In fact, one of the three initial runners went for over an hour, making this the longest run of her life – and she said it wasn’t nearly as hard as she had thought it would be! This was exactly how I felt the next morning as I finished up my final lap – running with others who I know well made this an incredibly fun night, and I honestly couldn’t have done it without the students who came out and ran with me. 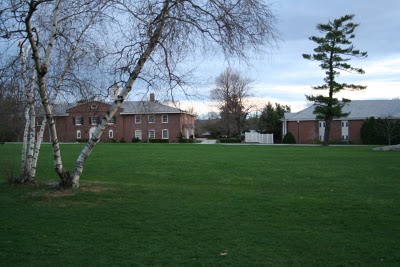 View of the green in the morning (forgot to take pictures during the night!).

After the first few hours, the rain began to let up, and an amazing thing started to happen – people began filtering out of the gym and joining us for a few laps. Many of these were people who hadn’t signed up to run, but did so because they heard we were out there. It was an amazing thing to see, and rare was it that anyone ran solo for more than a few laps – I’d estimate that we wound up having 40-50 people run laps at some point throughout the night! Students kept telling me what a great idea it was, and that they wanted to make it bigger next year – set up tents on the quad, get music playing, have teams compete and so forth. This was my hope – I didn’t do a lot of fundraising this year since most of my effort was directed to organizing and making sure that we actually could complete the event. My primary goal was to get this thing off the ground, build some excitement, and let our awesome students take it from here. I seem to have accomplished that, and hopefully it will continue to grow into a bigger event that will bring in larger donations to the American Cancer Society in the future.

While the night was about commemorating those who have battled cancer, and my primary desire in running 100+ laps was to honor the marathon of physical and emotional suffering that cancer patients and their families face, I also had an ulterior motive. I believe in leading by example, and one of my passions in life is promoting the positive health benefits of physical activity. I wanted those who joined in to see that running can be fun, and that running long distance doesn’t have to be painful. I was continually surprised by the number of people who commented on how fast the time passed, and how much easier their laps were than expected. I had at least one additional runner (another current student of mine) who joined unannounced and wound up running 10+ miles – also her longest run ever. I had others jump in and cover me during the 2 slots that I had originally signed up to run solo – by that point I was spent and wasn’t sure I’d be able to make it. There were cross-country runners, students training for the Boston Marathon, and students who run little if at all. What they all had in common was a desire to support the cause by running, and for that I am forever thankful. 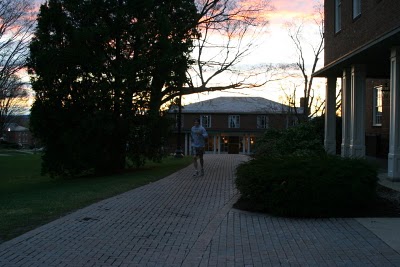 One of my students (Robbie) finishing up the second-to-last leg of the Relay on Saturday morning (he was of only a few who ran mostly alone).

One of the great things about running is it’s ability to put people on the same level. While out there running in circles I was able to spend time with students in a wholly different setting than I’m used to. Given my family commitments and the fact that a live 30+ minutes from our campus, I don’t get to spend a lot of time on campus during non-work hours, so most of my student interactions come in the classroom or lab. However, out there on the quad we were all equals. We talked about marathons, we talked about classes, we talked about post-graduation plans, we talked about life – talking on the run allowed me to connect with these young adults on a level that I don’t usually get to as the guy standing in front of the class – it was truly incredible. I’d be remiss if I didn’t also thank the on-line community – I received innumerable words of encouragement via both dailymile and Twitter, and even had the pleasure of running with two dailymilers during the night (Lauren R., who is also a student, and David L.). 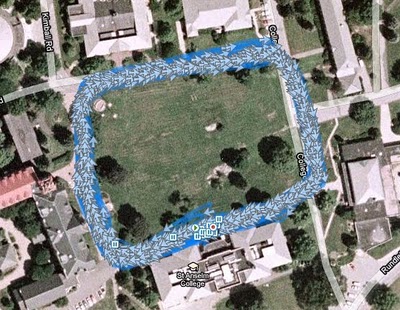 This is what 105 laps around the Saint Anselm College quad looks like (per my Garmin Forerunner 205 GPS watch).

I could go on and on about what a great experience this was, but I’ll finish with this. We runners have an amazing ability to do good with our gift. I see people all the time raising money by logging miles out on the road, whether it be in a race or simply an event that they developed on their own. Continuously throughout the night I was thanked for having put this event together, and for doing my part in running the miles. Really, though, this wasn’t about me. It was about every single person who made a loop around that quad, or who walked a lap around the gym. We all were using our legs to raise money for those who are working to cure cancer, and to commemorate those who have battled this horrible disease – that’s what this was about. So, all I can say is this – do something big with your running, and do it for a good cause – it’ll mean more than meeting any personal goal.

If you are interested in finding a Relay for Life event in your area, use the following tool: http://www.relayforlife.org/relay/findevent. It’s a great event, and one that you’ll never forget.

How I spent the day after getting home (and yes, I took but one 20 minute catnap the entire night): 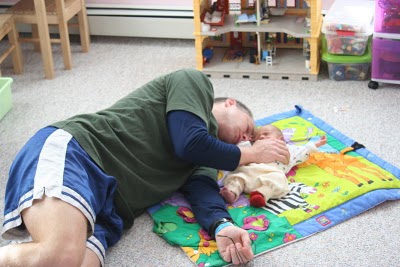