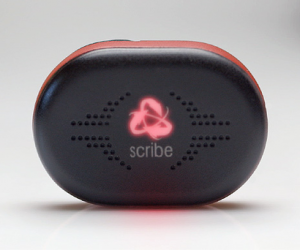 I get pitches for Kickstarter campaigns frequently, but rarely do I post about them since it’s hard to assess the potential of a device that I have not had a chance to play with myself. I’m going to make an exception to this general rule here to announce the launch of a Kickstarter campaign for a device called the RunScribe. Why? Because although I haven’t played with the runScribe, I was able to have a long chat with the developers of the device a few months back and they gave me a preview of what the device is capable of. It has the potential to be a very cool little gadget!

“runScribe is a lightweight running wearable that mounts on the back of your shoe and uses a 9-axis sensor to precisely capture the movements of your foot during the gait cycle. The precision measurements, combined with runScribe’s kinematic engine delivers the most advanced set of running metrics available outside of a professional lab environment.

While other running technologies offer limited information – merely tracking steps, distance and speed – runScribe makes thousands of calculations for every stride and reports on 13 detailed kinematic metrics. The scale and detail of data available through runScribe has never been captured in a consumer device, giving athletes, trainers and coaches real-world data to make informed training decisions.”

Below is a summary of the metrics that runScribe is capable of measuring: 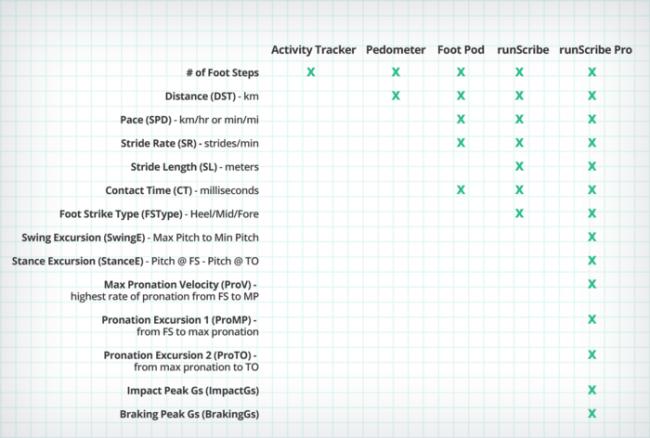 And here is a video preview about runScribe:

My take on the runScribe is that if it can provide accurate data, it could be a very handy tool for use in the clinic, and for comparisons of running in different shoes (I could have a lot of fun with this!). I also like that the developers are looking to crowdsource data from runners using the device to create a large database of metrics from the community at large. This could be really useful for seeing how a given individual falls on the spectrum of variation observed among those using the device, and even more helpful if individual metrics can somehow be related to risk for specific injuries (this would be a big challenge).

I’m hoping to have a demo unit in the near future to play with, and it looks like they are aiming for shippable units to be available by late November. In the meantime, if you want more information head on over to the runScribe page on Kickstarter. You can also check out the runScribe website, of follow runScribe on Twitter and Facebook to keep up to date on development and release timelines.