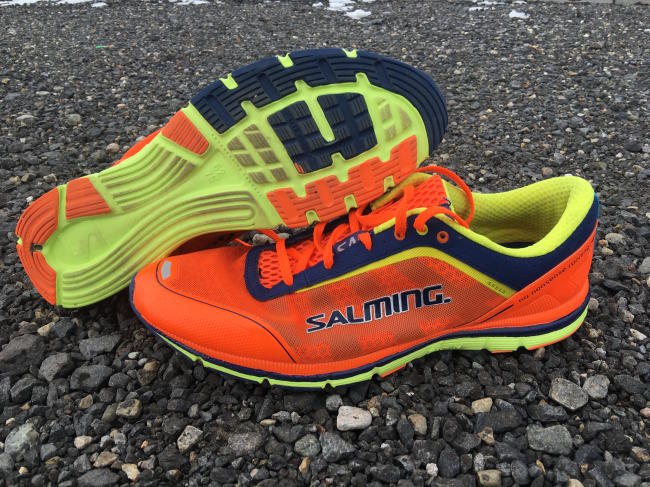 Salming has really shown up in the US market over the last year, and their shoes were included in two of my top 3 lists from my best of 2015 post.  The Salming Distance is one of the best riding, all-around road shoes I’ve run in – it’s similar in application to something like a New Balance Zante, but I feel it has an even better overall package and ride (hint to those who like the Zante :)).  Salming graciously offered to send me the new 2016 Speed, which they are calling the Speed 3.  The Speed 3 sits right in between the Distance and Race in almost every category (stack height, weight, geometry), yet shares the same Salming characteristics that I’ve come to look for after running in the Distance and T1 trail shoe.  More on the specifics below.

Specs via Running Warehouse (for Speed 1)

The upper is pretty much the same as the Distance.  Salming uses a 3-layer upper design. The outer layer is a harder, nylon-type mesh, with welded overlays on the inside.  The inner layer is a booty-style liner of softer mesh that also connects to the tongue.  The end result is a pretty comfortable interior, and I was able to go sockless for an entire marathon in the Distance, which has a similar upper to the Speed, with no issues.  The Speed 3 has a thinner lining material than the Distance, but it’s basically the same design.  Overall, the fit of the Salmings are quite good for my tastes, even though there are two notable fit issues. The first is that the shoes fit about a 1/4 size long, but are somewhat narrower than average.  This issue pretty much resolves itself since I would probably want to size up about a 1/4 size based on width anyway. The second issue, which I’ve had with all Salmings, is the the way they do the eyelets for their laces using fabric loops.  It’s an easy fix for me since I just cut off the loops and punch holes in the fabric that is already used for eyelets up higher on the shoe.  This provides a much more secure fit for me in the midfoot, and only takes around 5 minutes to mod using a leather punch like this.  While I don’t feel I have a super low volume foot, I’m definitely on the medium to low volume end of the spectrum, so those of you with more medium to higher volume feet should be fine with the shoes as they come. 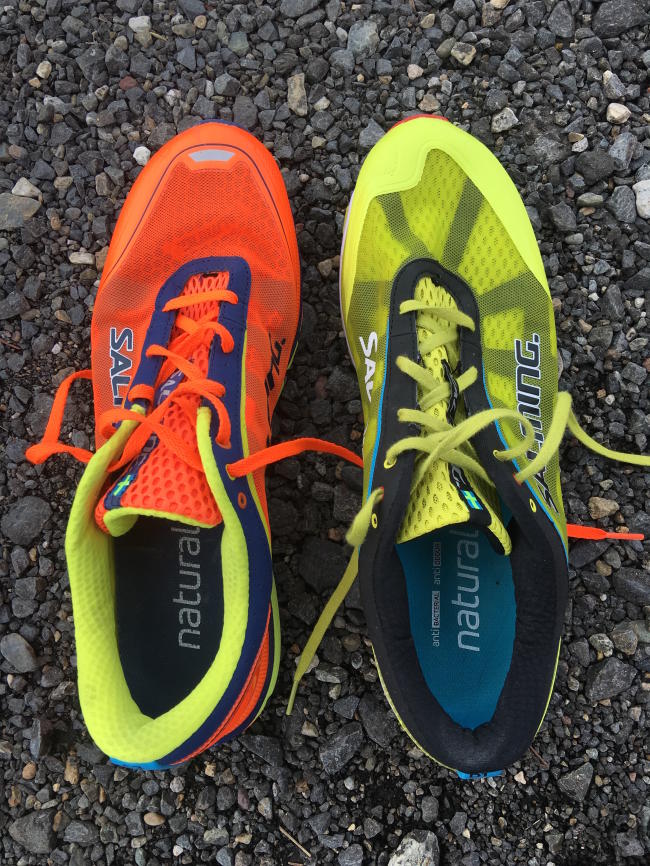 Salming Speed 3 on left and Distance on right. Very similar uppers. Speed 3 has a new toe cap, and also doesn’t have the 2 overlays over the toebox. Almost everything else is the same.

I thought the midsole on both the Distance and Race were quite good.  Salming uses their own injection molded RunLite compound – it has a firm feel, but has good responsiveness.  Not quite as good as adidas’ adiprene+ or Skechers’ new 5Gen, but still a very good midsole material that provides a fast, responsive ride with just the right amount of give to be forgiving on longer outings.  The Speed 3, as well as all the updated forthcoming 2016 models, will feature Salming’s new RunLite 2.0 midsole that seems to be lighter and yet just as, or even  more responsive.  The Speed dropped over 15 grams (.5 oz) in my size 13 from the 2015 to 2016 model, which I think is entirely from the midsole, and is not insubstantial.

The ride of the Speed 3 sits in an interesting zone where it is fast and sharp enough to race 5k and 10k races in it, but also has some potential for the 1/2 marathon and marathon depending on the runner (very similar to the Skechers GOmeb Speed 2 and to some extent the GOmeb Speed 3 for me; yes both named Speed ).  I’ve run it recently on a 15 mile run that included some tempo work and felt like would be enough shoe for the marathon for me as long as I’d spent some of my training block leading up to it in more minimal/lighter shoes.  The only question mark on what is otherwise a fantastic ride and geometry is that they left out the midfoot shank on this model.  Both the Distance and the lighter Race have one, and it is something I think that would be nice to add to the shoe at some point, although I will say I didn’t feel like it was noticeably absent.  One last thing of note is that the Speed 3 has a new insole that is made out of EVA rather than the memory foam like material that has been in all the other past Salmings.  This is a change I like since it adds just a hair more responsiveness and is also a bit lighter. 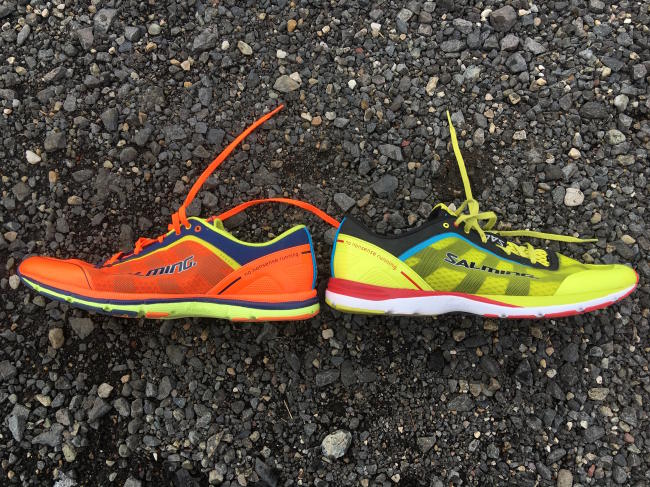 Midsoles are pretty similar with the Speed 3 being just a bit lower and narrower in profile. The geometry feels nearly identical which is a good thing.

The outsole is pretty similar in design as well to the Distance and Race with just different parts taken away or smaller in some areas.  One interesting thing to me is that the Race, which is over an ounce (30 grams) lighter, has more rubber coverage (and a shank), while the Speed 3 does not.  So far I haven’t felt like this was an issue, but an interesting design choice to me overall.  I will say that all of Salming’s road shoes have issues with outsole durability. I’ve put 80 miles on my Distance, and around 35 on the Speed 3, and they already have noticeable wear on the lateral midfoot and lateral heel, something I don’t usually see in most shoes till at least 100-150 miles.  The interesting thing is that Salming claims to have used a new rubber compound starting with the 2015 models, and they say it is 3 times more durable than before.  I’d hate to see how quickly it came off before!  I think part of the issue is that they choose to go with a more podded design to the rubber placement, and also have thin lines that act as a tread pattern that will wear quicker than solid pieces.  Of any of the features, outsole wear is one that they will need to address in their road lineup going forward, especially given the higher price tags for their shoes.  Of note, the outsole on their trail shoe, the T1, holds up really well, so maybe they could start by looking there. 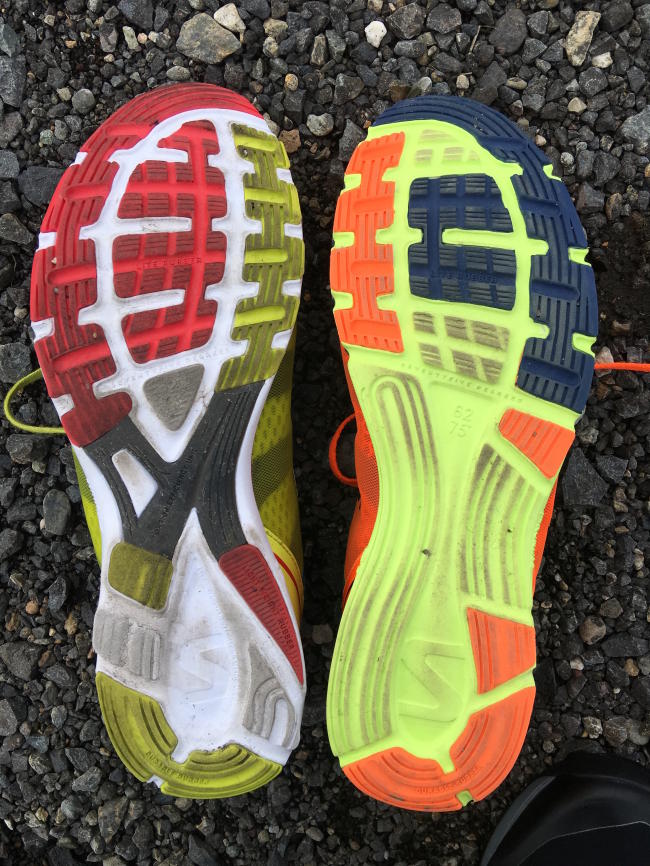 Speed 3 on the right in this picture. Less outsole coverage but a similar overall design. I thought the lack of medial heel rubber would be an issue, but because of the lower stack height and good flexibility it has not been noticeable.

All said, the Salming Speed 3 is a great racing shoe that can handle longer outings just fine.  The signature, efficient Salming ride is present in an incrementally sharper feel than the Distance, and incrementally more cushioned feel than the Race.  Where as the Distance feels like a trainer with speedy tendencies, the Speed 3 feels like a racing shoe through and through, but it has range to cover quite a few types of runs. If Salming can increase outsole durability, and maybe bring the prices down just a little, I would have little reason to not recommend what are some of the best riding shoes on the market if you like a natural and efficient riding shoe.

The Salming Speed 3 is available for purchase at Running Warehouse and Salming.com.