The Salomon S-Lab design team partnered with ultrarunning champ Kilian Jornet to create the Salomon Sense.  The team designed the shoe to be worn sockless by Kilian for the Western States 100 mile Endurance Run (which Kilian won in his second attempt – he decided to bring water bottles this time and try hydrating, good choice).

The Sense were produced and released for the public in mid-2012.  Since that time, I have had three pairs of the original Sense and one pair of the Sense’s successor, the Sense Ultra (I’ll refer to these as the ‘Ultra’ going forward for simplicity sake).  Both the Sense and the Ultra are terrific shoes. I have tried many (probably too many) shoes since I started mountain trail running, and these are hands down my favorite line of shoes to date.

My running approach/style:  I started trail running three and a half years ago in Vibram Five Fingers and huaraches, then moved to Merrell Trail Gloves, New Balance MT10s and Inov-8s.  Since that time, I’ve tried a lot of shoes, mostly of the minimalist variety.  I am a ‘forefoot striker’ and have come to like a shoe that offers flexibility (both lateral and torsional), is lightweight, and has enough protection and cushion to allow me to run anywhere from 50k to 100k without feeling like my feet have gone through a meat grinder (which is how my feet felt after running the Chuckanut 50k in Merrell Trail Gloves two years ago).  No longer a purist-minded minimalist, I want all of the aforementioned characteristics in my shoe, but have a very short list of shoes that make the mark.

The original Salomon Sense meet almost all of my requirements, but came up lacking in the cushion/protection department when I ran more than 50k on hard mountainous terrain.  This is where the Ultra comes in.  Together, these are a powerful duo.  When going out for a couple of hours, I grab the Sense, when going out for a 50k or more, the Ultra does the trick.

Both shoes offer an incredible fit.  Many runners have described putting on the Sense as feeling like they were custom made for their feet.  I agree with this, and can’t imagine a more form fitting yet comfortable shoe.  Salomon refers to the fit as their ‘Endo-fit’ approach.  Be patient putting the shoe on, as it’s snug until you get your foot all the way inside.  I recommend wearing very thin socks (Drymax Hyperthin Mini Crew is my first choice for these shoes), as the shoe was designed to be worn sockless and therefore may feel too snug with thicker socks. 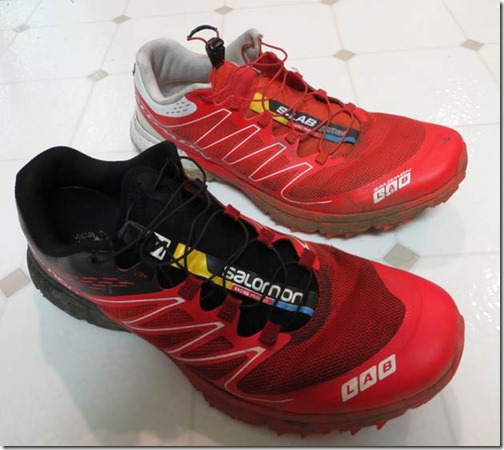 The insole was designed to be worn sockless (how Kilian prefers to run), but I still prefer the shoes with socks.  There are some seams on the medial and lateral sides that are easily perceptible on bare skin, and I can easily imagine these areas leading to blisters.

Here is my breakdown of the difference between the two shoes:

Durability:  Some runners found that the outsole began peeling off the midsole with the Sense.  I never had this issue.  There have also been reports of delamination on the upper.  My only problem thus far with either of the shoes has been wear through of the fabric on the medial side of the fabric.

Outsole & Traction:  The Ultra’s outsole is narrower than the Sense; however, this doesn’t seem to result in any difference in feel or function when running.  Both have great flexibility and solid ground feel.

If there is a serious drawback to either of these shoes as an overall training and racing shoe, it’s either the steep price or the lack of significant traction.  I haven’t found the lack of aggressive tread to be an issue, and credit the design team’s innovative approach for this.  The outsole and midsole bend, you might say morph, as the demand arises.  It is true that these shoes are not intended to be top performers in mud, snow and ice.  For everything else though, they perform admirably.  The Ultra does have deeper lugs than the Sense.  While this is perceptible to the eye, it is a rather slight difference in terms of function.  If you’re going fell running or jumping over crevasses (think Kilian in one of his short mountain running movies), grab a pair of Salomon Speedcross (review coming in a few weeks!) or the like.  Perhaps more significant than the depth of the lugs on the Ultra is the presence of lugs on the midfoot and front of the heel section.  Kilian wanted his Sense with only the bare necessities.  Given the rather slight traction of that shoe though, it’s a welcome change to have traction covering the entire bottom of the sole. 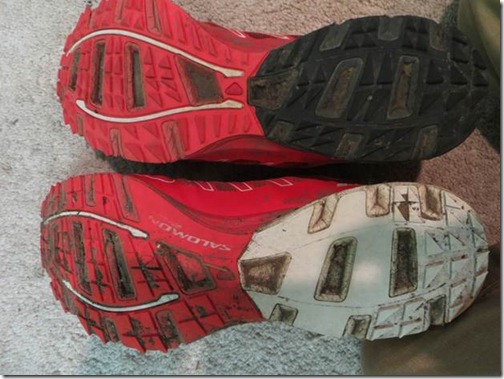 Protection:  The Profeel Film is what the S-Lab design team came up with to replace a rockplate.  This innovation is, in my opinion, revolutionary.  Why more trail shoe designers haven’t jumped on board yet is beyond me.  The Profeel Film (a puncture-proof weave) functions similar to what you might assume a thin layer of Kevlar would do.  It blunts push through of rock and root, but adds very little weight or rigidity to the shoe.  While the original Sense incorporated the Profeel Film only under the forefoot (might be fine for Kilian, but killed my feet midway through the White River 50 mile Endurance Run).  The Ultra utilizes the Profeel Film throughout the bottom of the shoe, as opposed to just the forefoot (thank you designers!).

Flexibility:  This is probably the most important aspect of both shoes in my opinion.  Salomon nailed it.  Their aim to deliver ‘propriotection’ is spot on.  The shoes have enough torsional and lateral flex to allow the foot to quickly adapt to challenging foot placements (roots, rocks, holes in the trail, etc.).  There is a sweet spot, and the designers found it, between giving just enough cushion and protection without sacrificing ground feel.  For comparison sake, neither shoe flexes as much as Vibram Five Fingers, Merrell Trail Gloves or the LaSportiva Vertical K’s, but they do offer more flex than the Inov-8 Trailroc Line (which have a strangely rigid outsole in my opinion), New Balance 110’s, and the Salomon Mantra.

There is slightly more flexibility in the Sense than in the Ultra, due to the reduced OS Tendon in the Sense.

Cushion:  The stack heights of both the Sense and the Ultra are reported by Running Warehouse to be around 19 mm heel and 15 mm forefoot. They have hardened the midsole in the Ultra, presumably to alleviate premature degeneration of this section of the shoe.

The Upper:  Very little change has occurred in the design of the upper.  There is a slight extension of harder/protective material over the toe in the Ultras.  The same fabric is found in both shoes, and is clearly made of lightweight and very flexible material.  This allows, in part, for the shoes’ overall light weight, but unfortunately undermines the shoes’ longevity to some extent.  This will likely be more of an issue for forefoot runners with wider feet (it has been for me).  When the shoe touches ground during a run, feet naturally splay and pressure is placed on the sides of the shoe.  My first pair of Senses began to rip on the medial side of the shoe (adjacent to where the toes flex) after about 100 miles.  My second pair of Senses are showing some wear in this spot after about the same distance, but haven’t begun ripping yet (I also went up a full size in my second pair, which allows a bit more room for foot splay).  The Ultras have about 150 trail miles on them and are showing a little wear in the same area. 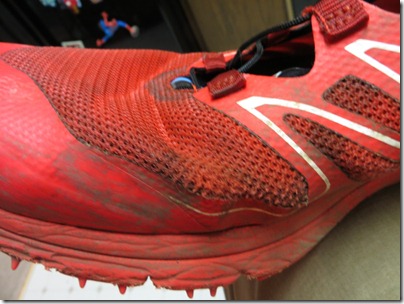 Both shoes have the ultra-thin yet impressively resilient speed laces.  Like other Salomon shoes, the excess laces tuck conveniently under a sleeve at the top of the tongue.

Summary:  As I mentioned before, these are my go-to shoes for just about all my mountain trail runs.  When it comes to exceedingly slippery or nasty conditions, something else is indicated.  The shoes are both expensive.  Ultras are currently $180 and Sense are still $200 (though some deals have recently appeared online, as warehouses make room for the Ultra).  That said, there has clearly been an incredible amount of attention paid to the design of these shoes, and you get what you pay for.  Word of caution though – if you start running in either of these shoes, you’re unlikely to settle for much else.  They are leading the pack in their category, hands down in my opinion.

Ben Luedke is an avid mountain trail runner living in the Seattle, WA area. He is the founder and manager of the Seattle Mountain Running Group, and has been ultra running on mountain trails for three and a half years. Ben regularly organizes self-supported mountain ultras in the mountains of the Pacific Northwest. You can follow Ben’s adventures and additional reviews at www.RunningTheCascades.com.