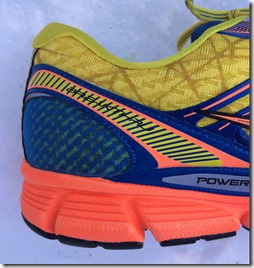 The Saucony Breakthru is an interesting shoe. It has the look, fit, and responsiveness of a performance racer, the weight and drop of a lightweight trainer, and a reasonable price point at $100. However, after running in the shoe for several weeks, I wonder if the fact that it tries to be something of a Jack-of-All-Trades might hurt it in the long run. It’ll be interesting to see how it is received by runners, and how it will be positioned by the Saucony marketing team (and specialty run stores). (Disclosure: The shoes reviewed here were media samples provided free of charge by Saucony).

My first thought when I put the Breakthru on was that they felt a bit tight up front. Not terribly constrictive, but they squeezed my toes together a bit and the upper material over the forefoot has no give. The fit is reminiscent of the Saucony Kinvara 4, or a racing flat like the A6. Not a roomy shoe, and I think that is intentional as it seems like the intent is for the Breakthru to be a performance-oriented alternative that slides somewhere in between the Kinvara and the Ride.

Specs from Running Warehouse indicate that the Breakthru is only 0.7 oz lighter than the Ride 7 (9.3 oz for the Ride vs. 8.7 oz for the Breakthru in men’s size 9), so the weight benefit is not huge. Stack height is 24mm heel, 16mm forefoot – thus, drop is the same as the Ride, but the stack height is 4mm less in both the heel and forefoot (Ride is 28mm/20mm). Unfortunately, I have not run in the Ride 7 so I can’t compare the feel, but in a blog preview Running Warehouse suggests that the Breakthu is firmer and more responsive. “Firm and responsive” is exactly how I would describe the Breakthru – it’s kind of like an 8mm drop, higher stack version of the Saucony Fastwitch with a narrower fit.

If all of the above sounds a bit confusing, it is. My worry for the Breakthru is that it’s trying to do too many things at once, and there may be better options in the Saucony lineup for each. You want a cushioned trainer, get the Ride. You want a firm performance shoe with a roomy toebox? Get the Fastwitch. You want a 5K racer? Get the A6. You want a lightweight, cushioned shoe for longer distances? Get the Kinvara or Mirage (or the soon-to-be-released Zealot). The question for Saucony will be whether the Breakthru can find it’s own niche – firm ride, performance fit, moderately lightweight, 8mm drop. The closest comparisons I can think of from other brands would be shoes like the Mizuno Sayonara or maybe the New Balance 890 (though the 890 is not as firm if I remember correctly – been awhile since I’ve run in them). I might even dare to throw out the Brooks Launch as a competitor – it fills the same niche, but the Launch is a softer shoe.

My experience with the Breakthru has been mixed. I initially thought they were going to be too constrictive up front, but they have been OK on the run so far. I have a size 10 in the Breakthru, which is a half size smaller than I wear in the Kinvara, but length seems to be perfect. I think a simple change like a slightly stretchier forefoot mesh would make for a comfier fit. Aside from the forefoot mesh issue, the rest of the upper is nicely constructed and looks great. I particularly like the padding and material lining the tongue and ankle collar – very comfy.

The sole of the Breakthru is going to be a love-it-or-hate-it kind of thing for runners. There is plenty of rubber on the outsole, so I expect durability will be good. The midsole is firm and responsive, so if you like cush you should look elsewhere. Personally I found the ride to be better when picking up the pace, but I prefer a lower stack option like the Fastwitch or A6 for speed and a softer option like the Kinvara for longer miles. And therein lies the problem, at least for me – I’m not sure what I would use this shoe for.

The Saucony Breakthru is an affordable ($100 MSRP), firm shoe with a performance fit and plenty of sole underfoot. My guess is that those who like the feel of the Saucony Mirage (or Mizuno Sayonara) will like the Breakthru as a more cushioned (though narrower) option, and those who train in the Ride and want a firmer, slightly lighter option for racing will like it as well. It’ll be interesting to see if the Breakthru finds a market – how about you, can you see yourself adding the Breakthru to your arsenal?

The Saucony Breakthru is available for purchase at Running Warehouse and Zappos.

For another take on the Breakthru, read this review by Steve Speirs at Run Bulldog Run.