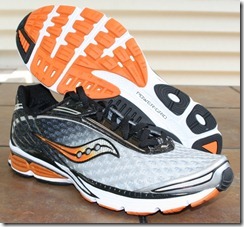 Saucony has done an excellent job diversifying their shoe offerings over the past year, filling out both the zero drop and 4mm drop niches. I’ve previously reviewed the Hattori, Kinvara, Mirage, Fastwitch 5, and Peregrine – that leaves the Saucony Cortana as the lone shoe among Saucony’s mainstream, low-drop running offerings that I have yet to review. Truth be told, I’ve had the Cortana’s for quite some time, so this review is long overdue. The main reason, and I’ll openly admit this at the outset, is that the Cortana is simply a bit too much shoe for my taste. As always, recognize that this is simply my opinion based on my own personal running tastes, and that’s not to say that this shoe might not work for you (*disclosure: this shoe was a media sample provided to me free of charge by the manufacturer).

Saucony describes the Cortana as a shoe that “isn‘t much for tradeoffs between soft and responsive….Built with just a touch of guidance, full-length PowerGrid™ technology of the Cortana provides superior cushioning and the 4mm heel-to-toe offset provides a super-responsive, close-to-the-road ride.” When reading this description, the two words that in my opinion best describe the Cortana are “soft” and “cushioning.” I’m normally not one to complain about a shoe being a bit on the soft side – after all, I’m a long-time fan of the Saucony Kinvara and have run my two most recent marathons in that shoe. However, the Cortana feels just a bit too plush for me.

Some of the sense of cushiness that comes with this shoe can be attributed to the memory foam insole – I am not a fan at all of a mushy insole like this. It may make the shoe feel amazingly comfortable for a try-on test in a shoe store, but it robs my feet of any sense of ground feel out on the road. Granted, it’s easy enough to just rip out the insole and replace it with one from another shoe, but since I’m reviewing the shoe as it’s sold, it’s worth noting my feelings about this. Actually, it’s quite possible to even just run in the shoe without any insole as there is a thin, soft layer of foam just below it. The memory foam insole on top of another layer of foam is just too much cushion for me.

On the positive side, with a stack height of 23mm in the heel and 19mm in the forefoot, the Cortana is middle-of-the road in terms of sole thickness, and the 4mm differential between heel and forefoot thickness falls right in my preferred zone for longer runs. Furthermore, the ample outsole should make this shoe plenty durable for folks who tend to grind up the sole of a shoe like the Kinvara quickly. Truth be told, the sole itself is actually pretty nice, and would work well for someone needing a high-mileage trainer. 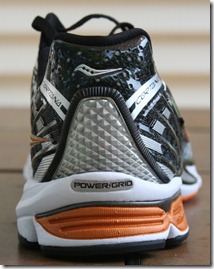 My other main issue with the Cortana is the substantial upper. Again, it’s not that the upper is poorly designed or problematic, it’s just that I tend to like shoe uppers to only provide what is absolutely necessary – mainly to just keep my foot attached to the sole and to keep junk out. The upper of the Cortana is much more structured than most of my other shoes, particularly in the rear portion around the heel. There is a fairly stiff heel counter on the rear of the shoe, and plastic overlays cover the sides below the ankle. All of this material ads weight to the shoe, and at just under 11oz in a size 10 they are among the heaviest shoes I have run in in quite some time.

In terms of fit, I have no major complaints. The fit is typical Saucony, very similar to the Kinvara, Mirage and so on. It’s by no means roomy, but there is enough space for my foot that the fit has never bothered me on the run.

On a final note, the MSRP for the Saucony Cortana is $145, though it can be found for less than that at some on-line retailers. This is a pretty hefty price tag when the Kinvara can often be found for half that price. The question would be whether the Cortana offers double the durability of the Kinvara, which seems like a realistic possibility given the more extensive outsole on the Cortana. Nonetheless, $145 is a pretty steep price to pay for a running shoe unless you’re really sure that it’s the right shoe for you.

The Saucony Cortana is clearly a shoe designed to appeal to the runner who likes all of the cushy bells and whistles in a running shoe, and is willing to pay for it. For me, the cush is a bit too much, and I’d rather pay less for less shoe (e.g., the Mirage or the Kinvara among Saucony’s offerings). Granted, the Cortana may turn out to be a bit more durable than the Kinvara, but I don’t suspect it will be that much of an improvement over the Mirage – the latter has an MSRP of $100 so it’s still considerably cheaper. If you like a plush shoe with a fairly substantial and supportive upper, then the Cortana would probably serve you just fine, it’s just not the right shoe for me.

The Saucony Cortana is available for sale at Running Warehouse.